Exploring the Fascinating Culture of Korea 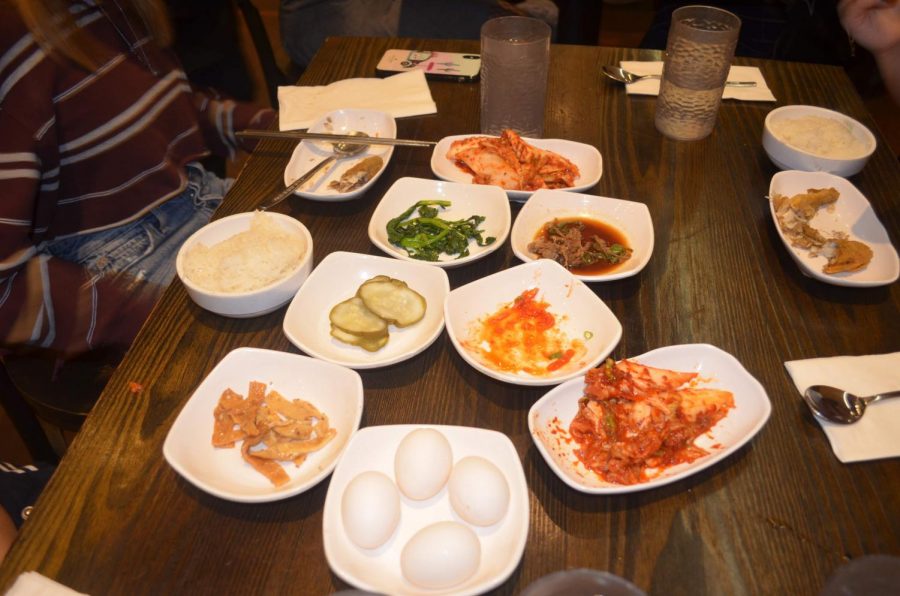 “The kimchi tofu soup consists of a raw egg, shrimps, mussels, tofu, red peppers, and beef. These simple toppings along with the steaming soup combine together to create a superb dish which exerts a spicy and savory flavor,”said Cameron Chang '20.

If you stroll along the streets of South Korea at night, you will see that posters of BTS’ Jungkook are hung on the light poles. Stores with Korean-Pop bands glow, luring every young girl, filled with excitement in the hopes of grabbing any Kpop merchandise that they see. High school students are increasingly influenced by Hallyu (the global popularity of South Korean culture) and Korean pop culture. Conversations frequently contain the terms “BTS, EXO, Big Bang, Astro, “What’s Wrong with Secretary Kim,” and “Strong Woman Dong Bo-Soon.” This time period is known as “The Korean Wave,” the growing influence of Korean culture, specifically pop culture.

“Recently Korea has been gaining more attention through popular bands like the Bang Tan Boys Band; it is the primary cultural export since it is the first aspect people think about when referring to Korea,” said Alex Jegarl ’20.

Tourists are not only interested in the Korean pop culture, but also in the myriad of cultural opportunities present in Seoul, one of the most populous cities in South Korea. “Traveling and exploring the societal differences between New York and Korea is interesting. I can see the contrasting cultures regarding food and places to visit,” said Tiffany Liu ’20. Seoul is a blend of both modern and traditional tourist attractions surrounded by extravagant skyscrapers, along with ancestral royal palaces that promote Korea’s modernized economy and awareness of the Korean heritage and history.
“Skin care products, such as Dr. Jart, Skin Food Co., and Innisfree are often in demand in Korea, as it helps to maintain a fashion-forward and trend-setting reputation,” said Lamisa Nubuyaat ’20.
People can experience a day as royalty at the Palace of Gyeongdong, where families and friends dress up in their beautiful hanboks, traditional clothing worn in the old days, in order to gain free admission into the palace. These hanboks can be rented at a relatively low price, starting from ten dollars and up to at most twenty dollars. The palace was built by the Joseon Dynasty (1392-1897) for kings, the Joseon royal family, and the administrators that managed state affairs through divisions of multiple complexes. Every day, the palace holds the Sumunjang (the Changing of the Royal Guards Ceremony) two times between the hours of 10:00 A.M. to 2:00 P.M. The royals enjoy the beautiful scenery of lotus ponds and the colorful and extensive architecture. This historical monument provides a chance for people to read ancient writings and to capture photographs for memories. Tourists can also choose to catch the English or Chinese tour guide two to three times a day, allowing people to learn about Gyeongdong, regardless of whether or not they speak Korean.

The city is also filled with countless places for people to explore, shop, and eat. In Seoul, streets are either filled with authentic traditional Korean food or continuous blocks of stores and small shops selling vintage clothing, skin care, and makeup products, and merchandise of featured characters such as Line Friends.

“Skin care products, such as Dr. Jart, Skin Food Co., and Innisfree are often in demand in Korea, as it helps to maintain a fashion-forward and trend-setting reputation,” said Lamisa Nubuyaat ’20.

Korean skin care and make-up has spread to other countries rapidly throughout recent years as products are exported to nations around the world, including America. While walking down the streets of Seoul, crowds of people constantly enter and exit makeup and skincare shops that have Korean pop songs blasting out of speakers. Each individual carries a small bag like a souvenir, hoping to find more treasures in the shop next door. Hundreds of people dart between a line of stores of skin care products of respected brands like the Face Shop, Nature Republic, and Laneige.

Later on, if shoppers gradually start to get hungry after fulfilling their makeup and skincare needs, Seoul has them covered with popular restaurants of traditional and street food. It is no strange sight to see hungry shoppers in particular lining up for the famous Myeongdong Kyoja restaurant during lunch time.

The Myeongdong Kyoja restaurant is known for its Mandu (dumplings), selling dishes starting from only 8,000 won and ranging to 18,000 won, equivalent to 8 to 18 U.S. dollars. This restaurant recently received a one star rating from the 2018 Michelin Seoul Guide (the rating system shows that a single star is an excellent quality restaurant, two stars means the restaurant is worth a detour, and three stars signifies that the cuisine is worth an exceptionally long journey). Compared to other restaurants, Myeongdong Kyoja provides private rooms, each with a capacity of eight people. The restaurant focuses on producing four main dishes: Kalguksu (soft noodle), Bibimguksu (mixed noodle), Mandu (dumplings), and Kongguksu (Bean noodle). By focusing on cooking four dishes, it creates a more efficient system that satisfies both the customer and the chef.

“Kings and royalties often contained all the side dishes in every meal to show wealth. To obtain the tradition, it is still maintained in every Korean meal,” said Mr. Alex Seoh, Physics teacher. “To name a few, the most popular ones include kimbap, rice vermicelli, soybean sprouts, and seasoned spinach.” Other side dishes include stir fried cucumbers and steamed eggplant.

After sunset, swarms of people set up stalls on the street to sell merchandise and street food. This is one of the many defining elements of Korea; tons of people arrive after school or work at these street vendors to enjoy a delicious snack before carrying on with their day. Some of Korea’s famous street foods include Tteokbokki (Spicy Rice Cakes), Sundae (Bloody Sausage), Pajeon, and Twigim (Battered Snack).

After eating a full meal, people can head for some entertainment and fun at Seoul’s famous pet cafes. Since 1998, the pet cafe craze has spread throughout the world. One of the most popular pet cafes includes Myeongdong Cat’s Playground that has a 10,000 won (10 USD) admission fee per person with a drink of your choice included. In an odor-free environment, customers can freely choose the types of cat toys and food (used to lure the cat in) and which cats to play with. For those who are not fans of cats, Myeongdong also contains other options such as dog and sheep cafes.

Drop by Korea to see the impact of pop culture on Korea, the amazing Korean street foods, and go on never-ending shopping sprees when traveling to Korea!