Bronx Science Students Celebrate the Year of the Dog 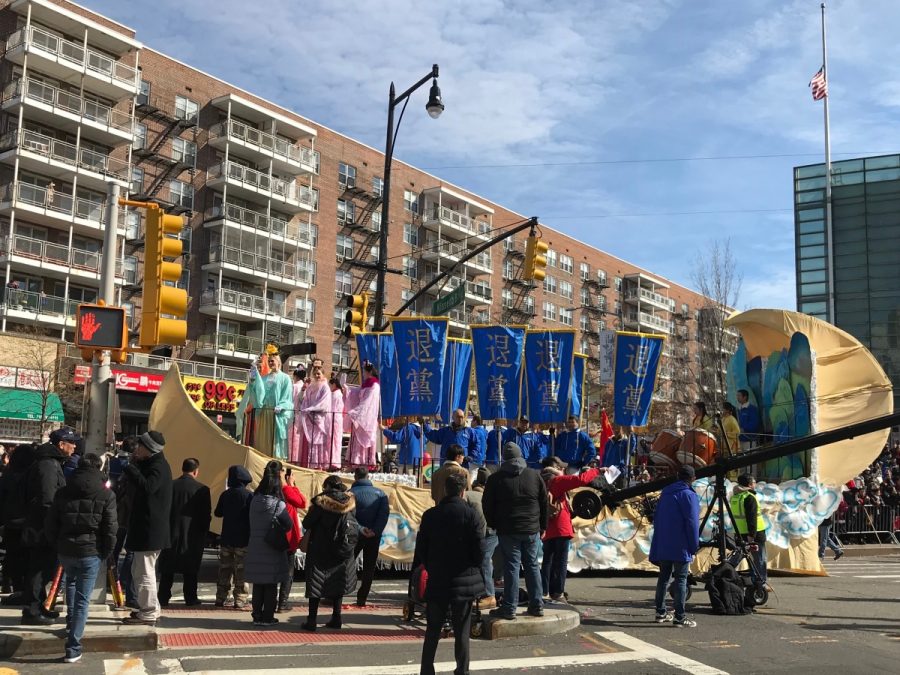 The Lunar New Year parade in Flushing, Queens on February 17, 2018.

One of the most widely-celebrated holidays in the world occurred in mid-February this year. No, not Valentine’s Day. This article is about a much older and more traditional festival. The festival being discussed here, of course, is that of the Lunar New Year.

Also known as the Spring Festival (春節 Chūn Jié) in Chinese, the Lunar New Year is observed and celebrated throughout Asia. Celebratory practices can vary greatly across different nations and regions. One of the most common practices is a family gathering. People often travel to see their families. The reunion dinner on New Year’s Eve is very important and is similar to Thanksgiving in that it is a meal where families celebrate and get together.

Like many traditional festivals, certain foods are often eaten for the Lunar New Year. During the New Year’s Eve dinner, foods such as fish, pork, and chicken are normally served. It is traditional to have dumplings (餃子 jiaozi) consisting of a meat/vegetable filling wrapped in thin dough. Some people also make Chinese New Year’s Cake (年糕 niángāo) out of glutinous rice to have throughout the time of the festival. “Some years my mom would cook salmon with a sweet tangy glaze, and other years we would eat hotpot with lots of beef and vegetables. My dad would fry niángāo, and if my mom was in the mood she would create dumplings from scratch!  Personally, my favorite food would be niángāo because it’s a traditional desert-type dish that is usually eaten during Lunar New Year, unlike dumplings and hot pot, which can be eaten anytime of year,” said Kin Yang ’20.

Many other foods are also served during the festival. Noodles are often eaten during Lunar New Year, as they symbolize longevity. Slices of dried meat (肉乾 rougan), similar to jerky but with a more sweet and savory flavor, are popular. Also popular are sweet foods, such as oranges, dried fruits, and seeds. Dried sweets are typically stored in a Chinese candy box.

Bronx Science is a school with a large Asian-American population, so it is no surprise that many students celebrate the Lunar New Year and believe that it is important. “I think it’s pivotal that people celebrate traditions such as these to spread the energy of love and family. With such heavy expectations such as succeeding at Bronx Science, I believe that students need a break, and spending time with family and friends while eating delicious food is a great way to relieve stress,” said Jackie Huang ’19. Other students find the Lunar New Year to have less of an impact, but still an enjoyable holiday to celebrate. “My family isn’t really traditional, but I do enjoy the atmosphere and traditions that we do follow through with,” said Jessin Wang ’19.

Students also feel that the Lunar New Year is important as it relates to their cultural heritage. “It’s important because I’ve always celebrated it, and it’s a part of my culture,” said Ean Tam ’19. “I think that it is important for people to celebrate traditional holidays such as Lunar New Year, because in our modern world, a lot of people start to lose touch with their cultural identity, especially when it comes to second and third generation children of immigrants,” said Yang.
“I think it’s pivotal that people celebrate traditions such as these to spread the energy of love and family. With such heavy expectations such as succeeding at Bronx Science, I believe that students need a break, and spending time with family and friends while eating delicious food is a great way to relieve stress,” said Jackie Huang ’19.
One very popular practice during the Lunar New Year is the gifting of red envelopes, which contain money. Adults often give them to children. “We exchange red envelopes with money inside, and record who gave how much so we can give them back the exact amount next year so that we don’t lose money,” said Nathan Auyeung ’19. “Mostly from adults to children, they give these money-filled envelopes to kids to have some spending money for the new year,” said Huang. Of course, one reason that children enjoy this is because they get spending money, but this is also meant to symbolize good luck.

Other traditions are also popular for students at Bronx Science during the Lunar New Year. “I like eating together with my family, going to see the Lunar New Year parade in Flushing, getting red envelopes, and writing Chinese calligraphy on red paper to use as Chinese couplets! My sister and I write calligraphy on red paper symbolizing luck and prosperity, while my mom and dad prepare food for the evening dinner on New Years Eve,” said Yang. Annual Lunar New Year parades take place in New York, both in Flushing and in Manhattan Chinatown.

Not only is the Lunar New Year a very significant, and one of the most celebrated, festivals in the world, but it is also a very important festival celebrated by many Bronx Science students. It is good when people of all backgrounds remember and preserve their heritage and culture, and this is often done by celebrating traditional holidays or festivals. That is why, to those who celebrate this festival, we wish a Happy New Year (新年快樂 Xīn Nián Kuài Lè)!