The Flavors of Musicals: Behind the Curtains of S!NG 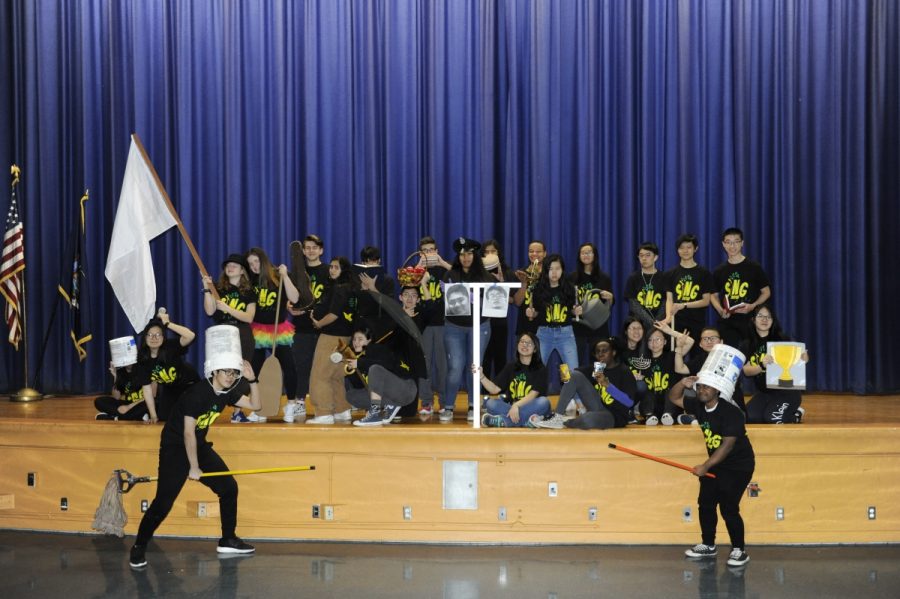 Musical performances, whether they are fast-paced hip hop from ‘Hamilton’ or catchy jingles Disney musicals, have an everlasting impact to people. At Bronx Science, some aspiring theatre-loving students have branched out from the drama department, and developed S!NG. It consist of actors who are passionate about choreography and music composition. Every year, these students tell a story that captivates their audiences.

S!NG is divided into two different parts, a stage crew and the performing cast. The crew manages all the props and decorates the background for scenes, while the cast performs the musical on stage. The crew team also consists of the program team, which is responsible for organizing advertisements and designing posters and t-shirts.

Before the official performances, the crew members painted flats and organized the props room. “We designed the set and props for the shows ‘More Than Pride’ and ‘Politics of Conflict,’” Felicia Chen ’20 said. “We worked hard for two and a half months in order to create the best experience for our actors and audience.”

While the crew was busy drumming up hype, the cast members were constantly rehearsing the show, doing everything from learning the choreography to memorizing their lines. This year, there were two captivating shows with different plots: ‘The Politics of Conflicts’ and ‘More than Pride.’ These two stories are the result of the hard work of the talented and creative members of both the cast and the crew of S!NG.

One show, ‘The Politics of Conflict,’ discussed the growing diversity of students competing for the role of SO President. ‘More than Pride’ involved two novice screenwriters who explore the corrupted community that is Hollywood. “As a writer of More than Pride, I created a story structure for the rest of the writers to work with,” Gregory Ginsburg ’18 said. “We had a lot of fun and interesting characters, so I really enjoyed helping to write a plot around them.”
“We had a lot of fun and
interesting characters.”
The faculty advisors, Ms. Vicki McGuigan and Ms. Kristen Parness were both ecstatic and content with the final product. “This year’s group was highly creative, energetic and ready to entertain. It was a great show!” Parness said. “Also, for the first time since the S!NG reboot, both shows were mixed grades, meaning there was no longer an underclassmen show and an upperclassmen show but instead grades 9-12 in both shows.”

S!NG consists of some of the most enthusiastic members of the Bronx Science theatre community. “Thank you for coming out to support your peers and the arts. Please join S!NG in the fall or consider buying an ad in our program for S!NG 2019!” McGuigan said.