Food Combinations: Two is Better than One 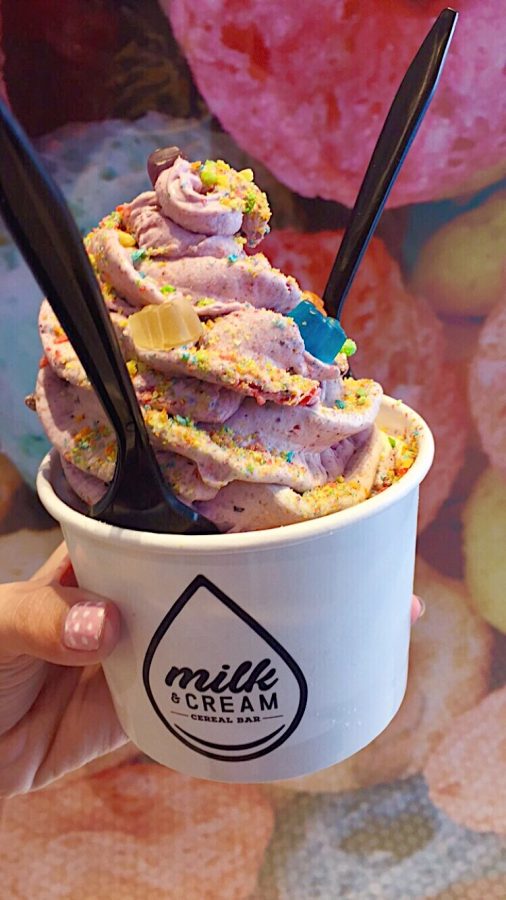 Social media is constantly surprising us with new food combinations. With new food creations on the rise, you will never have to choose between your favorite foods. Edible mashups are constantly being created, from sushirritos to bubble tea ice cream, so make sure you keep up!

Many of these creations are made right here in New York City. Chick’n’Cone is paradise for the fried chicken lovers, where they serve fried chicken in a waffle cone, taking waffles and chicken to the next level. Also located in Midtown Manhattan is The Ram, a lively and rustic restaurant. This place is home to the Pancake Burger, where they draw no line between breakfast and lunch. Rather than buns to hold the burger together, pancakes are used to add sweet to the savory.

At Chikalicious, a dessert bar in East Village, you can find one of the most famous food mashups—the churro cone. This dessert is a classic churro, but in the shape of a cone, served with ice cream.

If churros are not your thing, you can find the donut ice cream sandwich, at multiple locations in the Lower East Side. Stax and Stuffed Ice Cream both serve their own variation of the sweet delicacy—or as they call it, Cremella and Cruffs. A donut is cut in half like a bagel with ice cream served in between. They offer various toppings, such as oreo crumbs and cereal to decorate their new creation.

Nearby Stax is Milk & Cream Cereal Bar, where they recreate breakfast as dessert. Combining ice cream and cereal, this bar attracts customers from all over New York City. Another place with both breakfast and dessert is the Milk Bar.

A recent creation blowing up on social media is bubble tea ice cream at Bar Pa Tea. Tea flavored ice cream is served there with an option of tapioca pearls—the bubbles you find in bubble tea—as a topping. To many, the tapioca pearls are delicious and aesthetically pleasing additions to the ice cream. “It caught my attention when I saw it on my friend’s snapchat,” said Yusen Lin ’19, a fan of Bar Pa Tea’s creative new ice creams.
“Some argue that these mashups have gone overboard and that certain foods are off limits.”
Food combinations gained popularity through their aesthetic value and unique looks. Trending all over social media, these creations have been tagged as creative, as well as overwhelming.

Some argue that these mashups have gone overboard and that certain foods are off limits, such as the Ramen Burger, for instance, available at Smorgasburg. People point out the nutritional value of the “burger,” claiming the combined fat of the ramen and burger is unhealthy.

Another burger combination that received criticism is the Avoburger, served at Avocaderia in Brooklyn, which consists of smoked salmon and other ingredients placed between two halves of an avocado. Many question the naming of the “burger,” since the Avoburger cannot be eaten like one. Others question the design of the “burger,” claiming that the avocado should just be left alone instead of being made into a burger. Aside from the savory food mashups, sweet creations have also received criticism of their own.

Some dessert combinations from Max Brenner, such as the Chocolate Chunks Pizza and the Chocolate Crepe Pasta, have been marked as a chocolate disaster. Many argue that while certain desserts are delicious independently, combining them would be too much. Another dessert creation, the Cotton Candy Ice Cream, which can be found at Binki Cafe in Lower Manhattan, is considered a sugary overload for many. Overall, the desserts could be summarized as hell for the health conscious or heaven for the chocolate lovers.

However, despite the criticism, these restaurants should be given credit for their imagination and originality. From combining ice cream and bubble tea to a sushi and burrito combo, New York City eats have never failed to amaze us all.