Behind The Mask of the Monster Mash 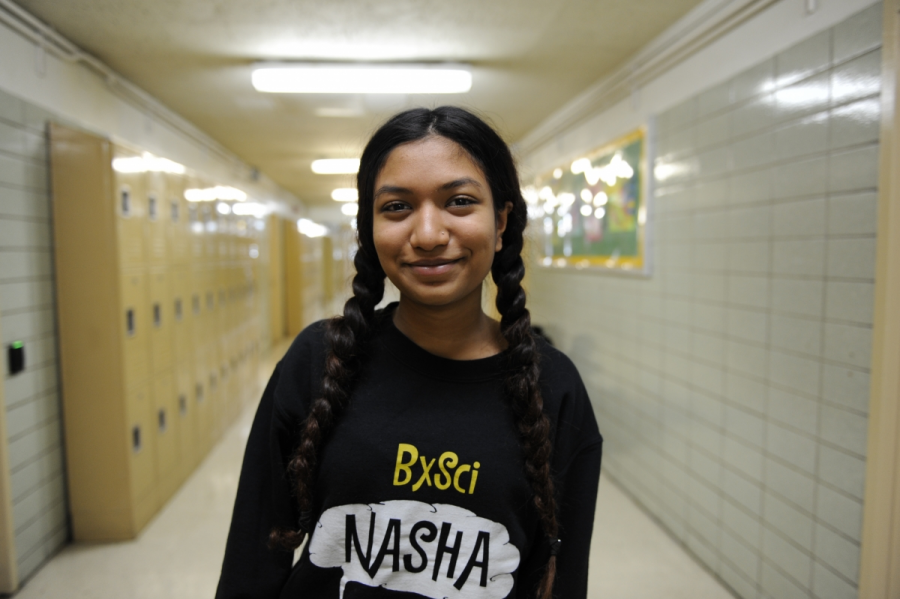 Anika Lamia ’18 enjoys contributing as a member of the S.O. for events such as the Monster Mash.

Once a year, 0n the spooky day of Halloween, students at Bronx Science can transform into someone or something else. The hallways are filled with all types of beings, including monsters, vampires, and witches. The highlight of everyone’s day is the Monster Mash, which happens in the cafeteria during all lunch periods.

As you step into the cafeteria, your ears become filled with music and laughter and your eyes soak in the many hauntingly-beautiful decorations and games. How does an ordinary cafeteria turn into such a lively place?

The Student Organization, or S.O., is a body that coordinates in-school events, including Monster Mash. Organizing such events takes effort, spreadsheets, and a pinch of creativity.

First, the S.O. appoints someone to take charge of operations. Anika Lamia ’18, the aforementioned member of the S.O. who was appointed as leader of this event, stated, “It’s a lot of work trying to plan and decorate and getting everything ordered and ready. It makes me feel like I’m not only getting involved with the school to help the students have a better time and de-stress, but I’m also getting a chance to explore my own creativity and make the spirit of Halloween come alive at Bronx Science.”

To organize everything, a spreadsheet is made with information about embellishments, props, and corresponding costs. Most often, props are purchased from a party decoration company called Oriental Trading. Chloe Frajmund ’19 said, “This year we’re having games like zombie bowling, bean bag tosses, can tosses, and Velcro darts. We’re also having a slime game in which we’ll put a golden ticket in green slime. Students have a few seconds to search for it in a ‘slime cauldron’ in order to win a prize.”

Sometimes Mr. Rainford, Technology teacher and Dean, donates some of his own equipment, such as strobe lights or a fog machine, as he did for last year’s Monster Mash.
“It’s a lot of work trying to plan and decorate and getting everything ordered and ready. It makes me feel like I’m not only getting involved with the school to help the students have a better time and de-stress, but I’m also getting a chance to explore my own creativity and make the spirit of Halloween come alive at Bronx Science.”
Because the S.O. has a strict budget for every event that they plan, they often find it challenging to balance the budget with the fun. Nevertheless, they have been beyond successful in making it happen this year.

“We do our best to distribute the budget throughout the year so that we can fund all of our events equally and avoid overspending, and we try to be as cost-effective as possible without sacrificing quality when making orders, so that our events can be both enjoyable and affordable,” Cy Toriello ’18 said.

To ensure that everything will be ready for the event, members of the S.O. stay after school to draw out a map of the cafeteria and designate areas for games, decorations, and props. The day before Halloween, they set everything up in preparation for the next day, but their work does not end there. Everyone gets assigned to a station in the cafeteria during the actual event to ensure that the flow of candy and games stays continuous and that nothing goes missing.

At the end of the day, all of the hard work put in by the S.O. is worth it. Shawon Paul ’18 said, “The monster mash last year was such a stress reliever for me. I felt like I had too much going on in my life academically, but the dance helped me let go of it all, as I had some quality time with my friends again. I am looking forward for this year’s Halloween, as it is my last year at Bronx Science.”