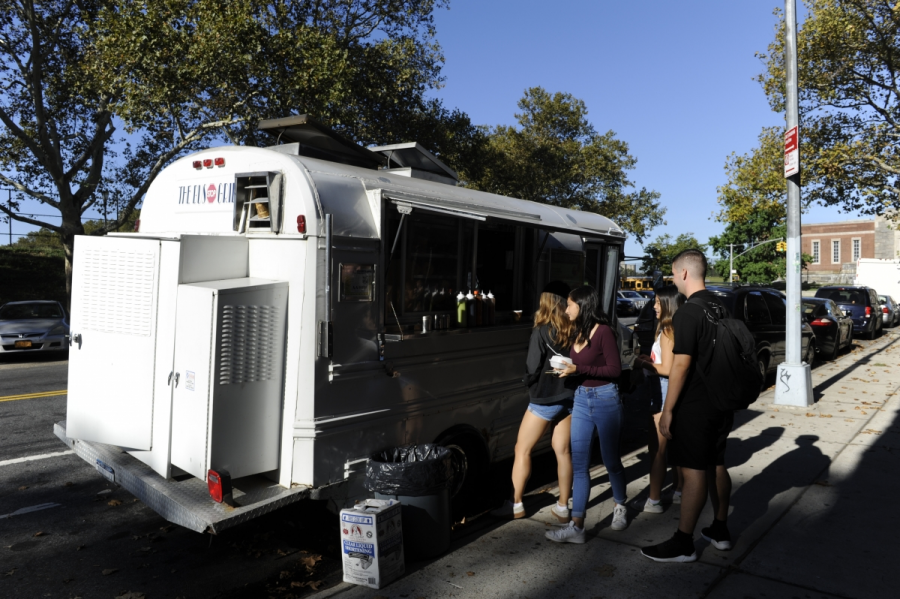 "My favorite thing to buy from Jay's is a bacon egg and cheese," Max Schliesman '18 said.

As students flood out of the doors of Bronx Science, teenagers run toward the small food truck just outside of Lehman College. After a long school day, students of all grades wait on line to pick up their after-school snack at Tony’s Halal Truck, a go-to stop for warm middle eastern food.

Across the street from Grand Villa is G&G Deli Gourmet. Here can be found a variety of sandwiches, including the popular New York City original: Chop Cheese (ground beef, onions, and lettuce topped with melted cheese).

For those looking for more variety, there is the Lehman College cafeteria. Just like any other college dining hall, Lehman has many different types of food, including pasta and sushi. The cafeteria is open to anyone who comes inside. “I love stopping at the Lehman cafeteria for a snack on my way to the Bedford Park 4 train station,” Matthew Zinkevitch ’18 said.
The beloved local food trucks are, however, the most popular spots for Bronx Science students to purchase food. There are three food trucks surrounding the school. Ranging from right in front of the school’s main entrance to around the corner of Paul Ave and West 205th Street, students have the options of going to the Bus Stop food truck, the truck near Dewitt Clinton, or the truck on the corner of Paul Ave and West 205th Street.

The student body does not refer to these trucks by their official names but by the names of their respective owners: Jay’s, Michelle’s, and Ned’s. The sense of community around the food trucks is something all students grow to love through their years at Bronx Science. Arriving to school every morning and being greeted by friendly faces serving breakfast makes the community that much kinder.

Students grow closer and more comfortable in the Bronx by through exploring different food experiences. Whether it’s going to Jay’s for a bacon, egg, and cheese, Michelle’s for taquitos, or Ned’s for chicken fingers, students can find their niche when it comes to after-school food.