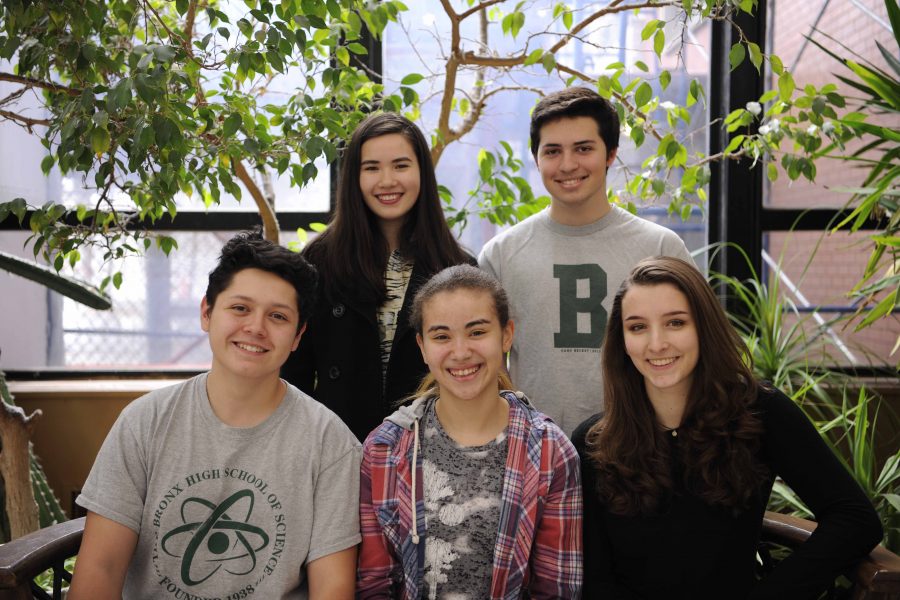 Every March, the Bronx Science student body votes for the school’s most important Student Organization positions. With the announcement of the nominees for President, Vice President, Secretary, Junior School Leadership Team (JSLT), and Senior Council President, election season is one of the times in the school year that students most look forward to.

When election results were announced at the start of 8th period on April 3rd, 2017, Sabrina Raouf ’18 was ecstatic to learn that she would be the next S.O. President. She has been part of the cabinet for the past two years, and she is currently serving as the S.O. Secretary. Being the school’s president is, for her, the perfect exit from high school.
“I believe the current Senior Council is doing a great job, so I simply want to expand upon their work and their senior events, in order to make them even better for next year’s seniors.”
“The two biggest ideas that I want to implement revolve around communication and school spirit. I want to have weekly WTV updates from cabinet officials, sort of like a ‘State of the Union’ address, so that the student body is informed as to what the cabinet is doing. I also want to revamp Spirit days. This includes hosting them more frequently, as well as providing incentives for students to actually participate in them,” said Raouf.

Raouf’s fun-loving personality also played a role in her election. “There was a lot of rapping involved during the campaign,” she said.

On the other hand, the next S.O. Vice President, Matthew Burke ’18, is heavily focused on the little things that matter the most.

“My most important plans for next year are to keep the school clean, but also to make everyone’s lives easier and better.  While I care about implementing a ‘Cleanliness Committee,’ and I would say that this is one of the most important pieces of my platform, I also want to focus on the little things that will just make everyone’s lives here better.  Something as simple as using your OSIS to go into the library if you forgot your ID would be extremely helpful to so many students,” Burke said. He plans to continue S.O. initiatives and events, and he also wants to push for the ideas that were on his platform.

Chloe Frajmund ’19, who has been elected S.O. Secretary, was inspired by the support of her peers, and she was motivated to give back to the school. She will work next year to make sure that the S.O. focuses on the wants and needs of the student body and on increasing school spirit.
“Our school has so many amazing fundraisers for wonderful causes, and yet there often seems to be no strong incentive to participate in them. I want to make Bronx Science a school that can help to fundraise more than 300 cans in a can drive when we have more than 3,000 students in attendance. I also want to make sure that our students and sports teams get the recognition that they deserve, through increased and better publicity for their accomplishments, games, and events,” said Frajmund.

One of the best parts of the campaign process for Michael Miller ’18, the next Senior Council President, was reaching out to the Class of 2018 and getting to meet so many people that he will represent next year. The most important thing that he wants to do is to decrease the stress that seniors inevitably face during their last year of high school.

“I want to increase the amount of senior events that we hold, to improve the ones that we currently hold, and I would like to bring in professionals from several different fields, so that students can understand what it would be like to choose a certain major for college. I would also like to increase the amount of subject related field trips that are held for seniors.  I want to make sure that your time as a senior is well spent; these are just some of the ways that I plan on doing so,” Miller said.

The elected JSLT, Johanna Neggie ’19, has been made aware of some of the school’s issues during her time in the senate in the past two years, and she wants to keep close contact with the current JSLT, Alena Blaise, who will be the SLT in the upcoming school year, in order to develop her ideas.
“My most important plans next year include working with the SLT to make health class available to freshmen and sophomores during the school year. Some students are not always able to go to summer school, and they are already very overwhelmed during their junior year. Just as importantly, I plan to work with teachers in order to reform SGI, our school’s grading policies, and I propose dropping the lowest test scores with midyear and final exam grades in AP-level science and math classes.  In general, it is very important to me that we increase communication between the student body and the teachers,” said Neggie.

All of the elected school officers for next year have one thing in common: the desire to improve school spirit and student participation. Our new officers, who were chosen by their peers, the student body, bring with them new ideas and a new era for Bronx Science.