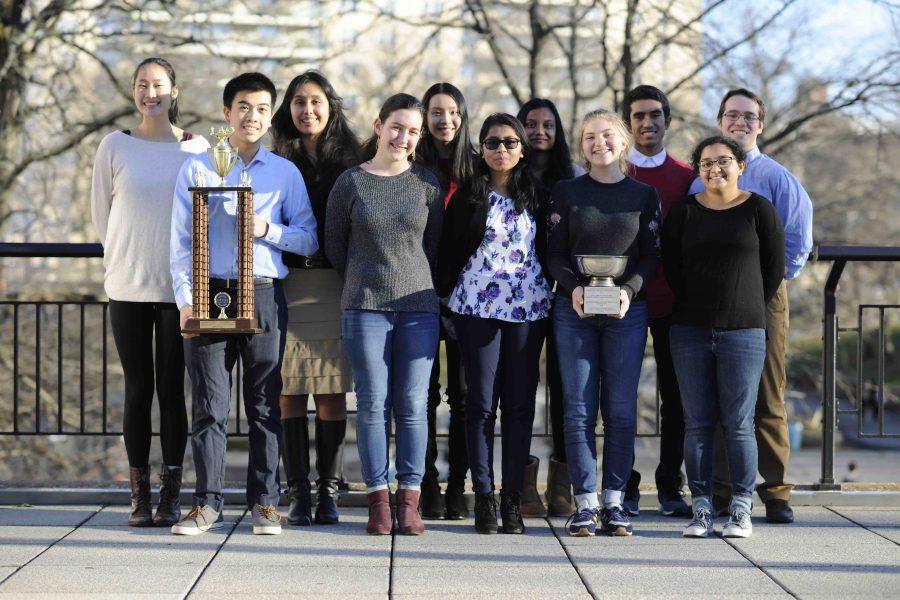 The Moot Court team, pictured with their awards.

The Bronx Science Moot Court team has won the championship in the NYC Justice Resource Center MENTOR Moot Court competition, for the second time in school history, and for the first time since 2010.

The competition included forty-five high schools from across the city, where teams competed at Fordham Law School for the first three rounds, and then at The Thurgood Marshall Courthouse, a federal courthouse in the 2nd Circuit of the U.S. Court of Appeals, for the semifinals and finals.

Every year, teams across New York City receive a made-up case revolving around two issues. This year, the teams argued about a Fourth Amendment issue, where a police officer searched a high school student’s cellphone without a warrant, and an issue that was similar to the real life legal battle between Apple and the FBI, following the San Bernardino shooting.

The team, led by Mr. Symons of the Social Studies department, consists of eleven members, including four starting oralists: Ryan Foo ’17, Catherine Tum ’17, Faraz Zaidi ’17, and Danna Burshtine ’19. Each oralist gave a ten minute argument in front of a panel of judges, a simulation of the Supreme Court.

“It was an unforgettable experience to be in a beautiful courthouse in front of actual district court judges. Although it was a lot of preparation and the stakes were definitely high, I had a lot of fun being up there,” said Zaidi, who has been on the team for three years.

“I start every year believing that the team can win it all. The difficulty with Moot Court is that the results are determined subjectively, which means that the winner is determined by a panel of judges,” said Mr. Symons, coach of over ten years.

The team practiced once a week with a group of lawyers at Akin Gump Strauss Hauer & Feld LLP, a corporate law firm in Manhattan, with whom the team has had a strong partnership for the past decade. The lawyers directly coached the students, which was a unique experience for all members of the Moot Court team.

“It’s amazing that we, as high school students, were able to work with professional lawyers on a weekly basis,” said Zaidi.

“Being on the Moot Court team has been an amazing experience, as I learned so much about how to frame a legal argument, by using Supreme Court cases and other forms of evidence, while also improving my public speaking and communication skills,” said team captain Ryan Foo ’17. Several members pointed to the fact that the team became close with each other, both inside and outside of the courtroom, which contributed to their success.

“As we got closer to the finals, we spent extra hours at the law office and even worked on the weekends. I think the reason why we succeeded was because throughout the entire process, we believed in each other, and we were just grateful to be able to compete,” said Catherine Tum ’17, a first year team member.

“My favorite part about this season was the fact that the team really bonded, and we truly felt like a family. I think that’s one of the main reasons why we were able to win the finals this year,” Foo added.

In the past few years, the team has gone to the quarterfinals and semifinals numerous times but fell short in advancing. However, this year they made a furious push to the finals for the first time since their championship season in 2010.

“What I was most proud to see this year was the students’ dedication to the team and to each other. They were all very selfless and worked very hard for the good of the team,” Mr. Symons added.

While the team is celebrating their win, the members are also looking forward to the Bronx Science Mock Trial team, which is slightly bigger than the Moot Court team.

The team works with the same law firm, and everyone on the Moot Court team is also on the Mock Trial team.
“They were all very selfless and worked very hard for the good of the team.”
The students will be preparing in the next few months for more competitions against other schools in a traditional courtroom setting, with opening statements, direct examinations, cross examinations, and closing statements.