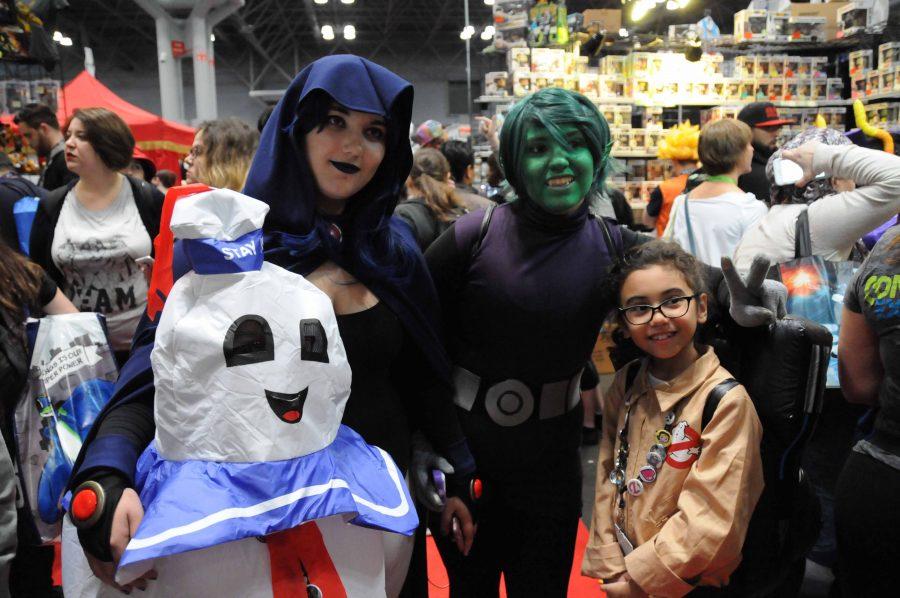 Revelers at the Comic-Con.

Early in October, you might have noticed a large amount of costumes, capes, and spandex around New York City. Either everyone was celebrating Halloween early, or they were headed to New York Comic Con (NYCC), which fell on October 6th – 9th this year.

Since 2006, NYCC, organized by ReedPOP, has been an annual pop culture phenomenon centered around comics, anime, movies, and television. It attracted over 170,000 attendees in 2015, surpassing the West Coast’s San Diego Comic Con.

This year, on a sunny Thursday, NYCC opened for the first time at multiple venues: the Jacob Javits Center, Madison Square Garden, the Hudson Mercantile, and the Hammerstein Ballroom. Over 180,000 people swarmed in and out of NYCC over the course of four days.

The majority of the con-goers attend NYCC to “cosplay” (otherwise known as dressing up as their favorite characters), attend panels, or a combination of both. Panels give fans a chance to listen to a live discussion with celebrities, often culminating in a Q&A session. This year, NYCC boasted a lineup of guests ranging from Neil DeGrasse Tyson to the cast of Doctor Who, and even Stan Lee, the creator of dozens of Marvel heroes, himself. As a result, stepping onto NYCC’s famous “red carpet,” which covers the floor of the convention, can feel overwhelming.
“There was so much to see,” said Sophie Malki ’17, a first time NYCC attendee. “I have a couple of fandoms I’m really devoted to, but I probably didn’t know 90% of the booths there.”

Many NYCC veterans use the convention’s app, which lists all the events, or even make spreadsheets to arrange their schedules. “Depending on how the popular the panel is going to be, I’ll get there anywhere from thirty minutes to two hours early,” said Cayla Einstein ’17.

When the hundreds of attendees are clamoring around a popular booth, trying to get into a popular panel, or just trying to get to a bathroom, the show floor can feel suffocating. This year, attendees waiting for Adult Swim’s Rick and Morty Virtual Reality booth, reported waiting in lines for as long as four hours.
Being in costume is extremely hot, and when half the attendees are cosplaying, the building becomes unbearably warm. Yet, a large portion of attendees put up with the warmth and cosplay, myself included.

Emma Gometz ’17, who attended NYCC for her third time, was there for this tradition. “My favorite part of NYCC is seeing all the insane cosplays. All that I can do is to respect the lengths that people go to in order to recreate their favorite characters.”

“Even cosplays that aren’t really amazing or are being done by everyone, are recognized, and people are genuinely excited to see cosplays,” said Angelina Downs ’17. “It’s a really positive, creative, and accepting atmosphere most of the time.”

“I’ve dressed up for Halloween before, but being at NYCC with so many other cosplayers was amazing,” said Malki, who was dressed as Barb from the Netflix series Stranger Things.

NYCC also hosts an Artists’ Alley, a section of the convention where professional artists set up booths to showcase their work.

“I save up all year to buy prints by the comic artists,” said Einstein. “I’m kind of obsessed. My walls are filled with posters that I buy every year.”

Unlike panels, the Alley gives fans a chance to interact directly with artists and purchase prints of their work on the spot. For some Wolverines, this is the highlight of the convention.

“Seeing the art and talking to the artist in person is really interesting, and I enjoy seeing how amazing all of the different art styles are,” said Downs. “I have some favorite booths that I’ve visited every year so far, and I look forward to visiting this year.”

It’s without a doubt that NYCC is full of excitement, attracting people from all walks of life. But NYCC isn’t without drawbacks.

Across the board, there’s one thing that both first-timers and veterans dread: the crowds. Sure, the Javits Center is big, but even it has trouble holding the sheer number of NYCC attendees.

“[The crowds] leave you immobile in lines for panels, at this point it’s getting so crowded you have to get to popular panels three or four hours early,” said Gometz. “Half your day is wasted waiting in line!”

Downs agreed. “Sometimes it’s hard to really appreciate all the things going on at NYCC, because you’re being pushed forward by a huge crowd of people.”

“NYCC is a crowded commercial mess,” said Gometz. “But digging through all the trash reaps intense rewards of unparalleled unique and nerdy experiences.”

“It was my first time, so it was crazy, but I would totally go back again,” said Malki. “If I were to give one tip to a first time con-goer, it would be to go with friends.”

At the end of the day, NYCC has grown into a convention we all know and love. It’s become the largest pop culture convention in the United States, and fans will be returning year after year, whether it’s for panels, cosplay, or for Artists’ Alley.