Reality Interchangeable With Fiction: The Rising Dystopian Societies in the Real World

An examination of the rising dystopian societies in the real world. 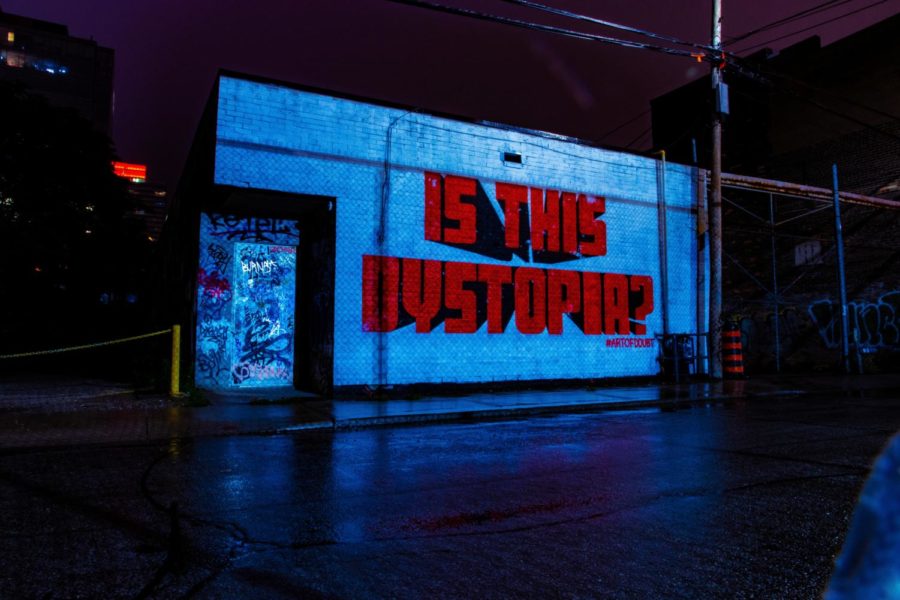 Graffiti in a back alley in downtown Toronto makes one contemplate the rising dystopian societies in the real world.

When most people think of dystopia, they think of Brave New World or any novel that imitates a totalitarian regime. Since modern governments that mimic totalitarian regimes are more discrete, people feel dissociated with the idea of a dystopian society ever occurring in their lifetime. That is why many cannot wrap their heads around the possibility of it ever happening.

Many also fail to loosen the definition of a dystopia. Twentieth century dystopia is obviously not the same as what a 21st century dystopia is, due to changes in demographics. Yet, it doesn’t make it any less horrifying to the people suffering underneath these societies. A 21st century dystopia as a totalitarian-style government where the people are limited from accessing the Internet, and the government breaks humanitarian protocols. This is not a completely new idea and if there’s one thing you can learn from history, it is that it never fails to repeat.

Russia, for example, has had a history of uncompromising leaders (an understatement in some instances), and it has always been behind in some sector of progress, when compared to the rest of the world. That’s also not news, but with the collapse of the Soviet Union, at least people thought Russia was stepping into the future. But history struck again and Putin came into the equation.

Putin’s Russia is post-Soviet Union, and it would greatly inspire creative thinking from George Orwell. After all, the setting of book 1984 was a replication of Stalin’s Soviet Union. Why can’t the same be said about Putin’s Russia? Let’s begin with its state propaganda. Under the Soviet regime, there were no independent news organizations. All sources of news, information, and opinions were state-owned and controlled, with public opinion suppressed and individual thought heavily discouraged. However, after the collapse of the Soviet Union, Russia was open to independent news outlets that were ready to deliver the truth. But then progress halted once Putin came into power and backtracked many of the policies; one of his first decrees was to crack down and take control of the independent media. Within a few years, most media outlets were taken over by the state. Today, only a few independent print and broadcast media are operating in Russia – a scary phenomenon. The media has a great degree of influence over the public and for some, it’s the only way they can get information. If you obstruct it, then you can alter the truth at your will.

However, the rampant use of propaganda is also something not unique to Russia. In the Central Asian country of Turkmenistan, the government controls nearly all broadcast and print media, and the state-run internet service blocks websites that carry independent news coverage or opposition-oriented content. Some citizens are able to access foreign satellite broadcasts, but the government continues efforts to remove receivers from houses in the countryside. This is also one of the main leading causes of why the country is barely on the radar for most global news outlets.

Regarding Russia, another interesting thing that the Russian government does that indicates a developing dystopia is the glorification of Stalin. A nation shouldn’t endorse their previous homicidal, genocidal, and ruthless leader. Stalin’s Soviet Union was a picture perfect nightmare. Work was so grueling in the gulags that prisoners would cut their hands with axes or place their arms in a wood stove to avoid work. Yet, a current state-owned news agency in Russia described time spent in the Gulag prison camps as a “ticket to a better life.”

Additionally, the Russian parliament has passed a new law making it illegal to equate the wartime actions of the Soviets with Nazi Germany, separating the atrocities of Nazi Germany from their once-allied nation. In doing so, they cover up the fact that Stalin was also an ally of Hitler at one point.

But while I am talking about these totalitarian ways, how does this actually affect the average citizen?

In Russia, the level of happiness has declined in the past few years as people have lost their enthusiasm over the annexation of Crimea, and realized the heavy burden it places on Russian foreign policy and domestic economy. The problem with relying on nationalism as a means of increasing happiness is that any happiness is short-lived and must be frequently reinforced by the regime, or it loses its effectiveness. While nationalism can be both the unifying force to mend a broken state, or the final blow that collapses a nation, it is more certain that its rewards are not guaranteed, with the risks typically outweighing the benefits. Examples include Yugoslavia, Austria-Hungary, and even the Soviet-Union. Pairing nationalism with the economic struggles the country has been facing, there is not a lot of positive outlooks for the people to rally behind. In fact, Russia’s economy is in a precarious position. They have a GDP per capita of about ten thousand dollars per year. In comparison, the USA has about sixty thousand dollars per year, Brazil has six thousand dollars per year and China has about ten thousand dollars per year. Not to mention, the recent turn of events with Ukraine has led to increased economic sanctions on an already struggling Russian economy, and generally, the average person does not support the war or a Ukraine under Russia.

Ms. Scotto, a Bronx Science teacher of AP European History, when asked about Russia’s authoritarian government said, “It is difficult to say that any society is truly dystopian. We don’t see any cartoon copies of George Orwell’s 1984, but there are many governments that have elements of a dystopian society, and Russia is definitely one of them. You can see this most clearly when it comes to censorship and propaganda. Putin has censored many news outlets and social media platforms in Russia and criminalized any public opposition about the war in Ukraine.”

These dystopian elements are not just contained within Russia. There’s many other similar societies – like the aforementioned example, Turkmenistan.

Turkmenistan is an extremely oppressive country. It’s supposed to be a secular democracy where society is blissful, but as most of these societies are, they are not as they seem to be.

The government severely restricts all fundamental rights and freedoms, including freedoms of association, expression, and religion. Private discussion and the expression of personal views are highly restricted through intrusive supervision by state security services, varying from physical surveillance, to monitoring of telephone and electronic communications, to informers placed and moving all around the state.

Freedom of movement is also restricted, with individuals barred from traveling abroad; officials are reportedly instructed to prevent Turkmenistanis under the age of 40 from leaving the country. Internal passports and a residency permit system also obstruct travel within the country.

Not surprisingly, the government places significant restrictions on academic freedom, limiting research on politically sensitive topics and preventing recognition of degrees from foreign institutions. Curriculums in schools and universities are controlled entirely by the government. Free speech is stifled by the government, who are able to carry out forced evictions without little compensation for those affected. Thus, activists and independent correspondents critical of the regime face increased intimidation, harassment, physical attacks and imprisonment, and are not publicly active. The country remains closed to any scrutiny, the most likely explanation for why the average person has never, or rarely, heard of the country.

Societies like these lead us to beg  the question: is our world really is stepping into the future? These are just two of the countless dystopian societies or ones in the making, out in our world. In China’s social credit system, citizens are rated based on social behaviors ranging from shopping habits to online speech. Those with low scores face obstacles in everything from getting government jobs to placing their children in desired schools – a dehumanizing tactic that allows people who oppose the government to be in a constant cycle of misery.

Global regimes have a lot to work towards, especially with history constantly threatening to repeat. The escape from dystopia is not near, but hopefully as we begin to understand it as less of a foreign concept and more of an enabled process, we can adopt the tools to fight it and rid it from our world.
A 21st century dystopia as a totalitarian-style government where the people are limited from accessing the Internet, and the government breaks humanitarian protocols. This is not a completely new idea and if there’s one thing you can learn from history, it is that it never fails to repeat.