Ginkgo Trees and Growing Up

As the sole survivor of the Ginkgoales family, the Ginkgo biloba has a fascinating history that may offer insight into our own ventures into adulthood. 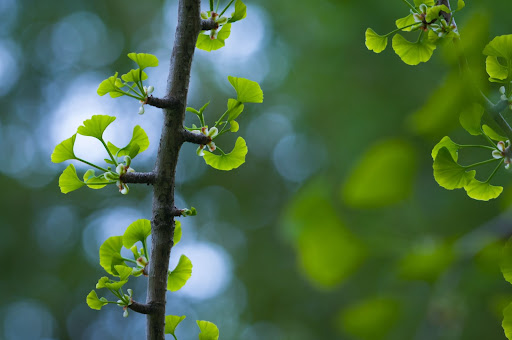 Though it may seem like an arbitrary topic, “Reflecting on a plant like ginkgo that was around in very different ecosystems when the dinosaurs were on the planet, that has been around for hundreds of millions of years, really puts our own species — let alone our own individual existence — into a broader context,” said Peter Crane.

On a hazy October afternoon, two young girls race down the long stretch of sidewalk next to P.S. 81, playing a game of “don’t step on the smelly fruit.” They hop between sparse spots of clean sidewalk bearing matching grins. One girl trips over a wayward stone, nearly falling face-first into the muck, but her best friend manages to save her.

This is a decade-old memory of mine. I was the girl who almost fell, and the “smelly fruit,” as I would come to learn, was from a peculiar tree called the Ginkgo biloba, also known as the maidenhair tree.

The ginkgo tree is an eccentric specimen, one more fascinating than I ever could have anticipated before learning about it. Its characteristic fan-shaped leaves and foul-smelling orange fruits make it easy to identify at a glance — or a whiff. But besides its unique appearance, the maidenhair also has a rich history and serves as an invaluable link to the past.

The ginkgo’s story dates back to over 200 million years ago, to a world vastly different from our own. At the time, the southern continents had yet to break off from Antarctica, and dinosaurs still roamed the earth alongside other now-extinct species. Several varieties of ginkgos populated the world, growing on every continent at one point or another.

According to the Seattle Japanese Garden, these trees “flourished until the ice ages, when the changing climate resulted in the loss of most of its range — and ginkgo trees surviving only in a few areas of China where more temperate conditions persisted.”

Despite there having once been an entire family of ginkgos, only one species survives today: Ginkgo biloba. Because of this, it is known as a living fossil, possessing no close living relatives and remaining practically unchanged since its heyday. Ginkgo biloba did not go extinct because early human civilizations took a liking to the intriguing plant, incorporating its seeds into meals, using its leaves for medicinal purposes, and growing them for ornamental reasons.

In many ways, the ginkgo’s story parallels our own shifts from adolescence to adulthood. As young children, we are often raised alongside peers from similar backgrounds, just as the maidenhair was once surrounded by other ginkgo-like trees. We are shaped by the environments that we spend our youth in, similar to how the ginkgo evolved to produce fragrant fruits that would attract dinosaurs and large animals to disperse its seeds.

And eventually, as time passes, we find ourselves in a world ostensibly detached from the one we were born into, where occurrences that we assumed were eternal turn out to be fleeting.

The ginkgo tree has endured two of the world’s five mass extinctions, and as such, has seen its surroundings change in a variety of ways. “For tens of millions of years it lived alongside plants and animals that are long since extinct. Several different kinds of ginkgo-like trees watched as our ancestors transformed from reptiles to mammals,” writes Peter Crane in his book Ginkgo: The Tree that Time Forgot. The environment as a whole has shifted multiple times over the course of the maidenhair’s winding history, yet the ginkgo itself has remained steadfast through it all. Although none of the ginkgo trees alive today existed alongside dinosaurs, the impact of that time period on them is still evident.

Similarly, though we used to swear we’d be best friends forever, my friendship with my elementary school best friend fizzled out after five years — conflicting schedules coupled with disparate perspectives led to us drifting apart in middle school. However, during our years of friendship, we influenced each other’s actions; I would try to mirror her energetic personality, laugh louder and push myself further. Even now, after years in another school with a completely different friend group, the remnants of the girl whom I was around her are embedded in the way that I present myself.

Growing up is a unique experience, affecting no two people in the same way, but its arduousness is nevertheless a shared feature. We will — hopefully — never have to live through a mass extinction like the ginkgo, but even so, it can seem like the world we are living in now is not the same as the one we spent our early childhoods in.

After our paths diverge from those we once viewed as constants in our lives and we depart from our old homes, it can feel as if we have lost a part of ourselves — but in truth, nothing is ever truly gone. We may find ourselves distanced from the people and places we grew up around, but it is important to remember that our memories and experiences are forever part of who we are.

As a living fossil, the maidenhair tree carries with it a link to all of its past forms and ancestors. Despite having lived through millions of years worth of changes in its environment, the Ginkgo biloba remains relatively unchanged. In an interview with Yale Environment 360, Crane stated, “[W]ork has been done now, by my colleague [Chinese paleobotanist] Zhou Zhiyan, who has worked on fossil material from China. And what he’s noticed is that there are some differences in the ways that the seeds are attached in these fossil plants — but in the grand scheme of things, they’re not very different.”

We grow up and move out, make new friends and drift apart from old ones. Our world changes and we evolve with it. Ultimately, the one constant in our lives is ourselves, the part of our identities that may develop with experience but never goes extinct.

I look back on the girl I was a decade ago and wonder how much I have truly changed, what pieces of my personality today are descended from minuscule moments strewn throughout my elementary school years. At the end of the day, I’m still the girl who looks at dirty sidewalks and sees fun games, the girl who looks at old trees and thinks, “There’s a story to be told here.”
We grow up and move out, make new friends and drift apart from old ones. Our world changes and we evolve with it. Ultimately, the one constant in our lives is ourselves, the part of our identities that may develop with experience but never goes extinct.