Write a letter to your future self to see how much you’ve changed. 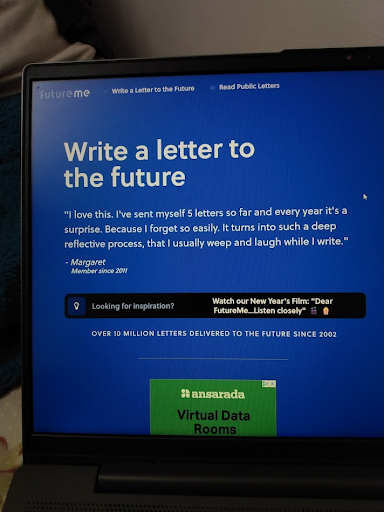 Using FutureMe can be a therapeutic experience. You are able to reminisce on events, whether they are something groundbreaking that happens in your life or just a normal daily activity.

As Mahia Rahman ’24 scrolled mindlessly through Pinterest, she found herself stopping next to an vibrant ultramarine ad for FutureMe. On the top, written in bold, was this statement: “Write a letter to the future!” She pressed on the link, curious about what the website might offer.

“When I was in the seventh grade, I discovered FutureMe and left a message for myself to hopefully receive in the eighth grade. I would say it was a pretty interesting experience,” said Rahman.

FutureMe, a website created by two friends, Matt Sly and Jay Patrikios, has become a “quiet phenomenon.” It is the ultimate way that one’s past (or rather present self) can interact with their future self, through letter-like emails.

Some write love letters to themselves or to those they cherish. Others offer advice to their future selves. Some people even berate themselves in these letters. Others fire off a million questions, hoping that they will be answered by their future self.

No matter what the contents of the letters may be, a few things stay the same.

First, the letters come in the form of e-mails. They are sent to the e-mail address you intend to keep. You can make these letters public or private depending on what you are comfortable with. If you choose to make your letters public, there is an option for an epilogue.

The epilogue is an update written by the author to showcase any changes from the past (when the letters were written) to the future. Additionally, public letters have ‘like buttons,’ enabling platform-wide interactions.

In my exploration of FutureMe, I came across three public letters from strangers. Despite knowing nothing about them, I developed empathy towards the authors. They spill their hearts out into these letters, and their pain, joys, grief, and dreams.

Seven years ago, on October 2nd, 2015, a man named Marc Dantes wrote a letter to himself, to be sent seven years later. He vividly described his hopes for the future, including marriage. “7 years from now, I hope to have married the girl of our dreams. She should be a Dantes by now. If you haven’t, then something is seriously wrong with you and you need to get a ring on that finger as soon as possible.” He ends his letter with a firm plea.

Paranoia is a universal feeling that humanity holds regarding the future. After all, the future is an endless mystery. However, FutureMe allows for people to hold onto the hope that they will make it, that they will achieve their wishes.

The second letter that I read was one sent quite recently, on December 19th, 2020. The individual in this letter, unlike Marc Dantes, was anonymous, veiled by an aura of mystery.

But one thing is clear. Her life is falling apart.

Starting from financial issues to the insecurities she has about the man in her life, this stranger touches on every troublesome part of her existence.

She feels lonely at times, even when she is loved. Her relationships with others are strained, and her relationship with herself is growing worse.

Despite the letter being a multitude of emotions, mainly melancholic, it ends with this: “But. If you’re reading this. You made it. You always will. I won’t give you a list of things to improve on, or things to reflect and ponder. Because I know you’ll soon, and eventually. But I’m proud of you. I have always been.  I don’t know what lies ahead, but let’s meet halfway, shall we? One day, I hope you find enough courage to do things, to feel things, to just be happy.” If put in conversation with Dantes, she would find comfort in knowing that she is not alone in her faith in the unknown.

The final letter I read traveled sixteen years into the future, and it is a heartfelt love letter a husband wrote to his wife. A man named Steve wrote to his Sarah, while she was away on a night with her friends. He speaks of his fear about potentially having Huntington’s Disease and then takes a moment to highlight his endless love for his wife.

He says, “I love that you love me. I love watching you with our children. I love you, pregnant with our third baby.” This letter forces a smile on readers’ faces. What is even better is learning of a fifteen-year update that Steve, the writer, has blessed us with. In the epilogue section to this letter, Steve writes that he tested negative for Huntington’s Disease and is still happily in love with his wife.

FutureMe, I hope, served its purpose for all of these individuals. Hopefully Marc Dantes did put a ring on that finger, and hopefully the stranger took all of her broken pieces and put them back together. It did serve its purpose for Steve and for Mahia Rahman. Rahman said, “I’m able to look back at the message I wrote to myself and see how much I’ve grown in thought.”