Stay Informed. Be Present. Be Aware.

It is becoming increasingly important to be aware of the ever present issues occurring in our society, as they pertain to all of us. 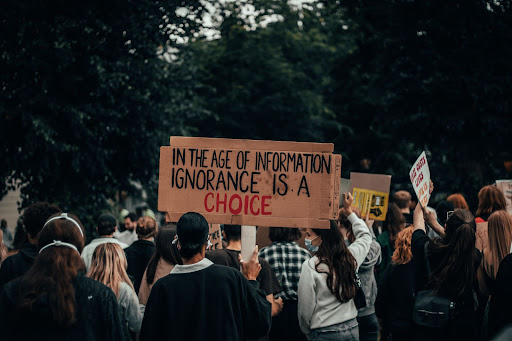 The internet is available to everyone, and everywhere. It provides explanation, and relays information to those who don’t know and are unclear about something. With that being said, in the end, the choice to be uninformed is simply yours if you are determined to dodge the news.

Sitting on the sofa, you scroll through your social media feed mindlessly — until your eyes rest on a post about the ongoing genocide in China regarding the Uighur Muslims. Eyebrows furrowing, you parse the contents of the post, as feelings of unease and distress rise within you.

It can be overwhelming, intimidating even, to watch or read the news, especially when we are bombarded with negative news. Many individuals thus engage in news denial because they do not want to go through unnecessary pain. For them, the world’s news is gradually becoming unbearable.

People are dying from the Coronavirus, tensions between countries are skyrocketing, and violence is rising dramatically, especially with the current war in Ukraine. For some, living in ignorance to all of these issues is seemingly the right way to avoid the negativity of the world. Who wouldn’t want to live in ignorance if that meant that they wouldn’t have to go through the harshness of reality?

Even though being uninformed is a feasible alternative, it is not the right path to follow.

When society decides to be ignorant of the world’s issues instead of tackling them, it will never reach solutions. Instead, we will all be caught in a constant, repetitive cycle of blissful mindlessness until the world we live in is in perilous straits.

This is why educating oneself about current events is more important today than ever before. Our world is changing so rapidly every single day that it is nearly impossible to keep up with the news. Yet, it is important to attempt to do so.

“We benefit a lot from being informed and helping others stay informed. It is important to be informed, especially when we are experiencing a health crisis. Without the help of news, residents won’t be able to stay safe and understand what others are doing to help our communities,” said Rogayatou Djalo Balde ’24.

Similarly, with subway and street violence on the rise, individuals should know how to protect themselves and constantly be aware of their surroundings. Knowing and understanding local news is a prerequisite to setting precautionary measures in place to minimize risk.

A healthy way to keep up with current events is discussion. Exchanging views about current events with others is helpful because it helps you to express your opinion while engaging with those who disagree, increasing your understanding of the topic.

However, even with the positives of discussing current issues, there is also a negative. Individuals might fear criticism regarding their opinions. “A notable example of this is presidential elections. A lot of people don’t take the time to disclose who they’re voting for or publicly push the ideas of the figure that they are voting for because they think others would disagree with them and invalidate their beliefs and opinions,” said Balde.

It is important to not shy away from discussing current events. Criticism is a fundamental part of having an opinion. Constructive criticism is valuable because it allows people to change their opinions based on the topic of discussion. Listening to all sides and opinions shapes one’s perspectives.

While I want to reinforce the importance of learning about current events, that does not mean that everything that you read, hear, or see is accurate. People mainly get their information from the internet. While some news on the internet is accurate and an original trusted source, other news sources can be inaccurate and biased. Being exposed to misinformation can create a narrow mindset regarding a given topic.