The Future of Women: Breaking Barriers

Impactful representation of POC women is important to diversify societal standards and bring attention to problems that are commonly ignored. 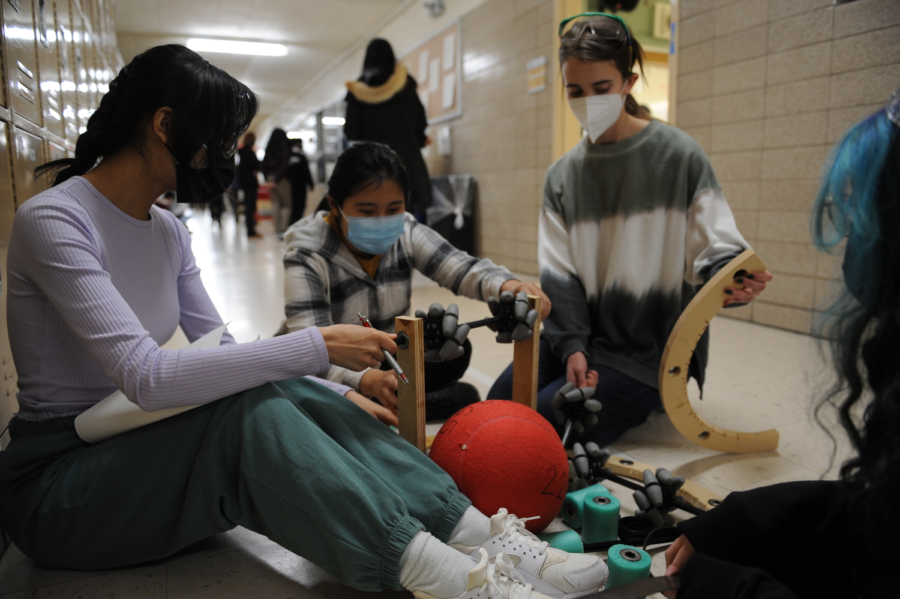 Our historically all-girls robotics team, the FeMaidens, is building more than just a robot – they are building their futures.

Despite these particular victories for people of color (POC), I was unable to recall other POC in positions of power. This did not sit well with me, so I decided to compile a list of influential women of color (WOC) to help bridge the gap.

Sandu is a 21 year-old activist from Chandigarh, India. She is an advocate of women’s empowerment and has grown up working at health camps while addressing women’s health and menstrual hygiene. While visiting a free clinic for women’s health and education in Delhi, Sandu told The Times of India, “We spoke about breast cancer, cervical cancer and a lot of people in our country and across the world are not aware of the symptoms…that is why, it is important for men of our society to come together and talk about it because women still feel uncomfortable when it comes to their feminine hygiene.” Sandu is also an ambassador for Smile Train India, a non-governmental organization which provides free cleft lip surgeries to impoverished children.

Becoming the first Sikh woman to win Miss Universe and the first Miss Universe India in twenty-one years is only her most recent accomplishment, and certainly not her last. Sandu’s victory has lifted her into an even more powerful position, enabling her to bring more awareness to charitable causes, like Smile Train India.

Sandu’s ability to represent and connect with South Asian women on a deeper level has already shown to be extremely impactful, as evident from her attempts at reframing society’s outlook on women’s healthcare/feminine hygiene.

Broyles is a 20 year-old Alaskan and Korean-American. She won Miss America 2021, becoming the first Miss Alaska to ever win in the competition’s 100 years of pageantry.

Broyles is currently majoring in biomedical sciences and minoring in voice performance at Arizona State University’s honors college. She hopes to become a dermatologist, and she plans to use her Miss America winnings of a $100,000 scholarship to help fund her medical school education. This prize money would allow her to choose a medical school based not solely on what she could afford.

In addition to her interest in healthcare, Broyles is dedicated to helping those with disabilities like her brother Brendan, who has Down syndrome. She has chosen the Special Olympics, the world’s largest sports organization for those with intellectual and physical disabilities, as her Miss America social impact initiative.

Brendan has competed in athletic events with Special Olympics Alaska, so Broyles has “seen firsthand the impact that the Special Olympics has on the families of people with intellectual disabilities,” she told Anchorage Daily News. She has also used her platform on Miss America to share her struggles with mental health and dermatillomania, a form of obsessive compulsive disorder (OCD) that is characterized by chronic skin picking.

At face value, the victories of these POC women may seem like an accomplishment for only the countries they represent, but in reality, their victories mean much more.

Research shows that primarily Caucasian countries have historically had a much higher chance of winning or moving onto the semi-finals of beauty pageants, compared to non-Caucasian nations. If this pattern continues, girls from non-Caucasian countries will look negatively upon their appearance, believing that they are not beautiful because they fail to fulfill the western ideals that media associates with beauty.

Broyles told People, “I was growing up and not really seeing Korean women who looked like me in popular media. I remember I was ashamed of my heritage and I was avoiding embracing it at all costs.” Now Broyles is proud to be the first Korean-American Miss America and proud to represent her Korean heritage.

“It [Sandu’s and Broyles’ victories] was totally unexpected and I am so proud of them for their victories,” Sherry Lin ’22 said.

Beauty pageants should no longer subscribe to the stereotype of being a superficial contest based on physical beauty. Instead, they can become events that celebrate female role models, accomplishments, diversity, and intelligence.

Beauty pageants can also be agents of change themselves. The Miss America Organization is recognized as one of the world’s largest providers of scholarship assistance for young women with every winner being awarded with a minimum of $50,000 in scholarship money. They help women earn scholarships, expand their social networks, learn life and career skills, and make a difference in their communities, fostering an environment where women can support each other.

However, participating in a beauty pageant that requires contestants to have a social initiative is not the only way women can make a meaningful impact on the world.

As District Attorney of San Francisco, she created a program that gave first-time drug offenders the opportunity to earn a high school degree and find employment. During her time at the Senate Homeland Security and Governmental Affairs Committee, she fought for better protections for DREAMers and called for better oversight of substandard conditions at immigrant detention facilities.

It is important to have WOC in positions of power because they can best represent the problems in their POC communities and try to resolve them through legislation. For instance, Harris is a first-generation American and consequently has experience, if not her own, then from fellow immigrants, about the struggles and injustices involved with immigration. She can recognize the subpar treatment of immigrants, empathize on a deeper level, and enact change.

Brewer has had a long history in corporate America. In 2017, she became Starbucks’ Chief Operating Officer. During her time there, news had come out about the arrest of two young Black men who were arrested from a Starbucks after sitting down without ordering anything.

Brewer told Today, “It was very personal. I saw these two young men, and what really struck me was they were the same exact age as my son, John, and I knew right away that I had to dive into this one… This could have happened to him.” Consequently, Brewer implemented policy changes and racial bias training for employees in more than eight thousand stores.

In 2019, she became the only Black woman to be on Amazon’s board, but left the company in 2021 to be the Chief Executive Officer (CEO) of Walgreens Boots Alliance, Amazon’s competitor in the healthcare business.

Walgreens Boots Alliance is the largest company ever to be run by a Black woman, and by taking control of the company, she is the only Black woman running a Fortune 500 company today. In the past, there have been two other Black women to run fortune 500 companies (from 2010-2016, Ursula Burns was the CEO of Xerox Co. and in 2019, Mary Winston was the interim CEO of Bed, Bath and Beyond.)

Discriminatory thoughts like these are a result of the lack of WOC in various executive positions. Currently, only six percent of women hold CEO roles in Fortune 500 companies. However, companies that do try to employ more women to executive ranks are mainly in the retail industry, which propels the harmful belief that women in business are always related to marketing or merchandising.

Al Gurg was ranked number one on Forbes’ “Middle East’s Power Businesswomen 2021” list and number 92 on Forbes’ “The World’s 100 Most Powerful Women” list.

Al Gurg is the president of the Dubai Business Women Council (DBWC), where she advocates for women’s rights and works to improve female entrepreneurship in the United Arab Emirates (UAE). DBWC provides women living in the UAE with practical education, training, and networking opportunities to further their development and aspirations.

“Women have constantly been given the underhand of education and opportunity, resulting in their lesser success, which reasons their lack of resources in the future. It is a cycle of misfortune that can be broken with success stories of more women in power… She is using her power for the better – that is what having women in power now is all about: inspiring the young ones,” said Josephine Kinlan ’22.

Al Gurg’s social impacts so far have already been amazing as she continues to empower women as a role model. She is closing the gender gap in the strictly patriarchal society of the Middle East.

The goal of this list is to bring attention to a few very powerful WOC and their impacts to promote gender and racial equality around the world. However, it is important to note that these women are not perfect, nor should that be expected. Nobody can accomplish anything highly influential without encountering controversy.

For instance, during Alberta’s 2019 provincial elections, Rachel Notley used strong and fierce rhetoric in her campaign, yet she was still criticized for being too gentle and was seen weaker than her male opponent. Gender stereotypes only exacerbate problems.

Controversies about women in power are often sensationalized, but this article was meant to highlight the positives that these women have had. Despite their setbacks, their constructive influence remains invaluable.
“The victories indicate that the societal view of women is changing, widening, growing – it is becoming more respectable and confident as well in the capabilities of women all around the world. This is momentous for our future,” said Josephine Kinlan ’22.