Taking Capitalism Out of College: The College for All Act

Biden’s Student Debt Forgiveness Plan is nowhere near enough - the College for All Act, on the other hand, may just be the answer to the calls of debt-ridden students. 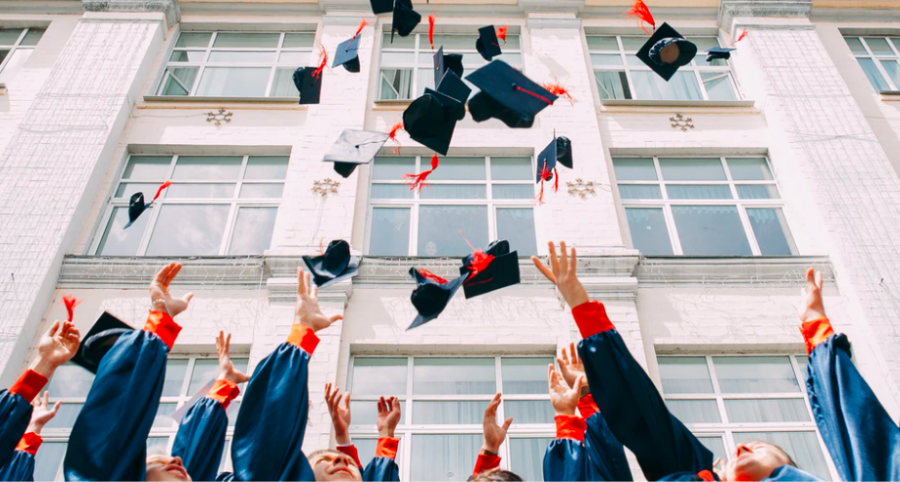 Graduation is cause for celebration, although for many, a college diploma comes at a hefty price.

As another academic year in school year is coming to a close, some students may have their sights set on summer plans. But for college-bound seniors, this excitement may be shrouded by the oncoming financial burden in the fall.

The United States is full of world-renowned universities, all of which come at a high price. The average student graduates with $37,000 in debt, second only to the United Kingdom’s international record of $55,000 in average debt per student.

These statistics only truly apply to public schools, however — private schools are far more expensive, as tuition for a single year is typically around $35,000, equivalent to the total debt incurred after 4 years of study at a public school. Private schools’ price tag is all the more appalling considering that tuition for one year costs more than half of the average household income in the U.S., which lies at $68,000.

The rising cost of college has long-lasting implications beyond just students and their families. “Economies will struggle under the growing mound of student debt as young adults delay marriage, home purchases and childbirth and have less money to spend on housing, food, clothes or entertainment,” said John Chamie of YaleGlobal Online. To put the economic impact of student debt into numbers, “The average borrower will have to start paying nearly $400 a month to the government instead of spending that money out in the economy,” said Senator Elizabeth Warren at a hearing on student loan debt on April 13th, 2021.

With this newfound realization, the government is finally brainstorming legislation to confront rising student debt in the United States — or is it?

President Biden’s proposed answer began on his presidential campaign trail. His Student Debt Forgiveness Plan aims to alleviate the financial burden of student loans by pardoning a maximum of $10,000 in student loan debt for students. While no details have been made clear on who would be eligible for the maximum amount of loan forgiveness, some politicians are already telling Biden that $10,000 is nowhere near enough, urging for a maximum of $50,000 in forgiveness.

While Biden’s Student Debt Forgiveness Plan shows the government is finally recognizing the heavy financial burden of college, the plan is simply a bandaid on a broken system. Student debt forgiveness will not prevent students from going into debt. The basis of the plan is that student loan debt is going to be a persistent issue. It is like giving bottles of water to a town with no access to clean water, instead of building the infrastructure needed for a constant flow of potable water.

Rising college tuition not only impacts those who are already attending a university. Think of all the people who want to go to college, receive that prized admissions letter, and then turn the page to see their financial “award.” Tens of thousands of dollars a year is not a price that many can realistically pay, in spite of how eager and motivated they are to go to college. “It is absolutely unacceptable that hundreds of thousands of bright young Americans do not get a higher education each year, not because they are unqualified, but because their family does not have enough money,” said Senator Bernie Sanders of Vermont.

President Biden’s Student Debt Forgiveness Plan does not address the generations of people who were robbed of their chance to receive higher education simply because they could not afford it. People of color in particular are disproportionately impacted by the high cost of college, as the average cost of college tuition tends to be a greater percentage of their household income than it is for Caucasian students. This makes the financial burden even greater for students of color, furthering the racial disparity in colleges nationwide and putting students of color at a disadvantage even when they do attend college, as “Black and Hispanic graduates also generally have attended institutions that have less money to spend on offering a quality education,” said CJ Libassi of the Center for American Progress.

High college tuition is the root of the problem. That is what Biden’s Plan fails to address, and what another plan might just confront.

The College for All Act, proposed by Senators Bernie Sanders and Elizabeth Warren, among others, would make community college and trade school free for all students, regardless of their income. It would also make public 4-year schools tuition-free for all students below an income bracket of $125,000 a year, provide financial aid for families unable to afford room and board, and make the new maximum Pell Grant $13,000.

The College for All Act expands access to higher education for a variety of people, whether they are interested in going to vocational school to learn a new skill, attend community college to hone their educational interests, or go to college with a specific degree in mind that they wish to pursue.

The College for All Act is especially timely, as during the Coronavirus pandemic nearly 90% of borrowers paused payments on their federal student loans due to financial hardship. The uncertainty that comes with being able to make loan payments has led to mental health concerns among many students and graduates alike, with 65% of loan borrowers citing that they lose sleep from stress over their debt. Biden’s Student Debt Forgiveness Plan would not eliminate these burdensome loans, leaving the grand majority of borrowers still anxious over how to make payments.

While the College for All Act is not the end-all and be-all solution to the climbing costs of college in the United States, it is a big step in the right direction. Offering a chance at education for more students and giving students the ability to focus on their studies instead of their finances, the College for All Act may be the beginning of the end of capitalism’s grip on college.
Student debt forgiveness will not prevent students from going into debt. The basis of the plan is that student loan debt is going to be a persistent issue. It is like giving bottles of water to a town with no access to clean water, instead of building the infrastructure needed for a constant flow of potable water.