Living Near the Historic Woodlawn Cemetery

An exploratory walk through the Woodlawn Cemetery as two students explain how it is like living near one their entire lives. 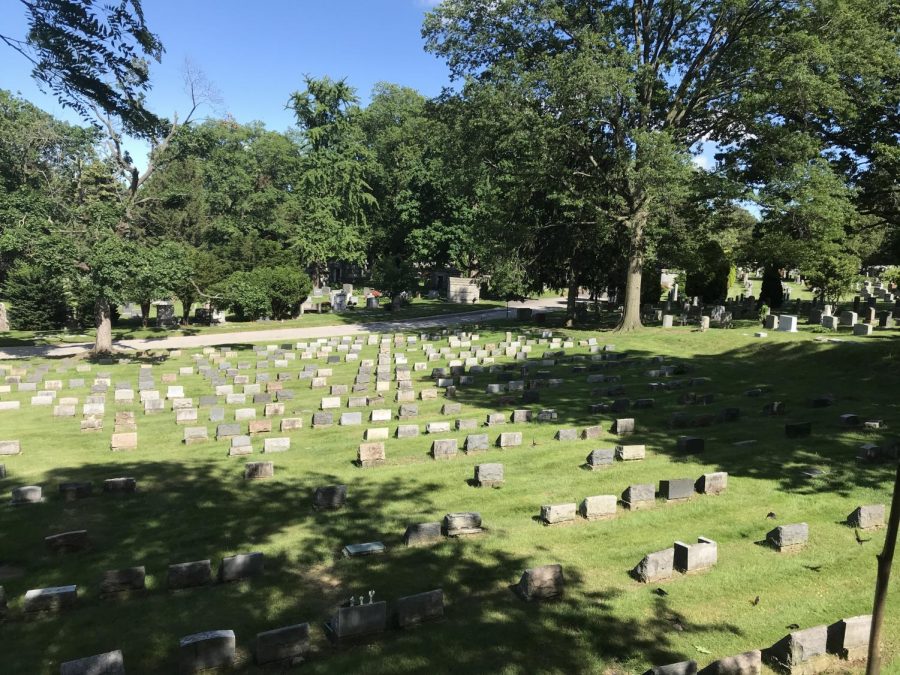 Here is a view of the Woodlawn Cemetery.

Where others had their Central Park, I had the Woodlawn Cemetery. I was raised overlooking a cemetery. It was located right across the street from my apartment building.

“Almost every day, we would walk by Woodlawn Cemetery on our way to our elementary school, on the sidewalk next to the cemetery’s fence,” said Mohymin Islam ’22, an old neighbor of mine.

Now, we were walking on the same sidewalk in Woodlawn Cemetery, going from south to north on a cloudy spring afternoon.

“My parents and I would rarely walk there since the sidewalk along the cemetery was, and still is, in a significantly worse condition than the sidewalk across the road.”

The sidewalk in question belongs specifically to the southeast corner of the cemetery, one bit of the vast 400-acre puzzle that is the Woodlawn Cemetery, a national landmark and the final resting place for more than 310,000 people.

“I didn’t know it was a national landmark,” Fahim Faisal ’21 was telling me as he paused on another walk, at a different time from my walk with Islam, yet in the very same cemetery. This time we were going from north to south. He eyed the cemetery for a moment before turning to me. “I never really looked into the place. But since it was so large and must have had so many residents, there was no way that some would not end up being famous.”

Islam added, “Miles Davis, Herman Melville, Duke Ellington… I knew there were some respectable people buried there but.” Islam looked away from me for a moment. “But, no. I had no idea it was a national landmark.”

It received the title in 2011, nearly two centuries after its founding in 1863. Initially starting as a convenient resting place not too far away from Manhattan, the cemetery has evolved into something much greater.

“My earliest memory of the Woodlawn Cemetery,” Faisal said, “dates back to when I was five years old. Not knowing much about it, I just viewed the cemetery as a frightening place with thousands of tombstones poking out from the ground. As a kid, I viewed it as a scary place, and it instilled a fear in me. I’d sometimes think that I was living amongst ghosts, especially when I was home alone. I was frightened to go to the bathroom at night sometimes just because of that fear.”

He stopped. We were passing by the block with his apartment building. He looked at it for a bit, then at me, and then at the cemetery.

“The cemetery used to remind me of scary monsters when I was younger, but now it’s more of a peaceful place filled with amazing architecture and blossoming plants.”

Not only has it been the home to numerous deceased individuals, but it has also become an architectural and botanical work of art. Its arboretum houses more than 375 unique tree species and cultivars from all over the world.  The architecture speaks for itself with key pieces like the Straus Mausoleum, a maquette of the Vernon Castle Memorial, and the Harbeck Mausoleum.

“It reminds me of the entire history of art. It reminds me of hundreds of thousands of people and their stories hidden below the ground,” Faisal said. “Surprisingly it reminds me a bit of Bronx Science’s atmosphere in the mornings and the place being filled with half-awake people.”

Each structure marks a story, leaving those beneath neither wholly asleep nor awake. They nag at the seams of their resting place through their insistent reminders of those that once were. The Collapsed Dancer is a piece dedicated to dancer Irene Castle’s husband and dance partner, Vernon Castle. Clara Sulzer’s intricate grave monument tells of her early death at nineteen just before her marriage to her fiance, William Gibson. Beyond carved stone depictions of lovers and even humans, wooden sculptures of animals can be seen, which are carved on the deceased trees in the cemetery and represent local fauna. It appears that everything is a memento mori here.

“You know, I think there’s a good chance that I may be buried in Woodlawn Cemetery some distant day from now,” said Islam.

He looked over the mass of tombstones and slowly motioned towards them. “I think that I would prefer being buried in this cemetery, since it’s close to where I live, and close to the neighborhood that I grew up in. Where I am buried doesn’t really affect me when I’m dead,” he faced me, “considering that I am dead, but… but it is comforting to know where you’ll be buried after you die,” said Islam.

And with that, he smiled goodbye.
Where others had their Central Park, I had the Woodlawn Cemetery.