Do “I Want to Believe”? Alien “Sightings” Versus Scientific Observations

Recent sightings have brought the concept of extraterrestrials back into the mainstream, but not in the conventional sense. That leaves the question, how can these observations be separated from ridiculous conspiracies, as they continue to gain traction? 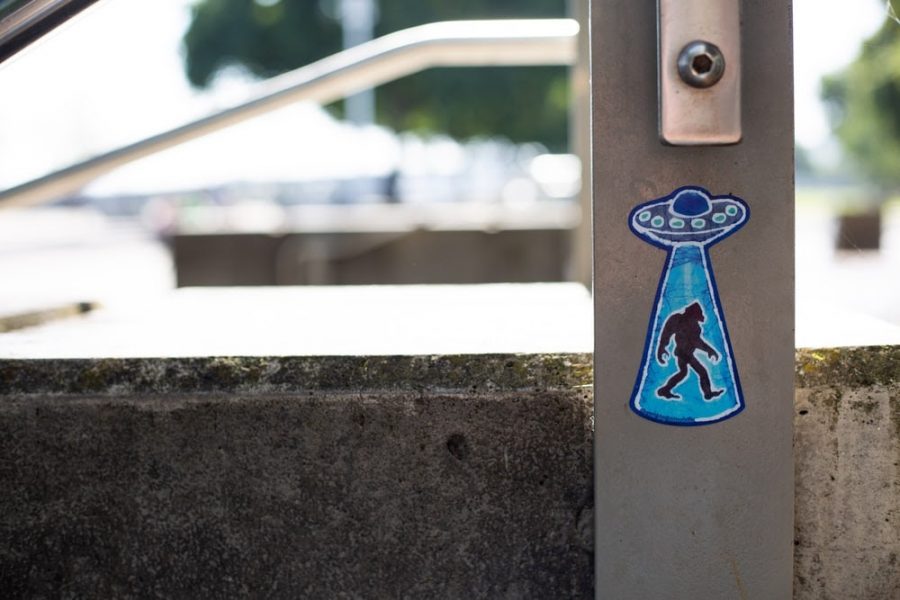 Here is an anonymous sketch of Bigfoot being abducted by a UFO, engraved onto a railing post.

In a vacuum, it is difficult to say there is anything inherently wrong with theorizing about extraterrestrials. It is undeniably an attention-grabbing idea, and moreover, there may be an actual place for it inside the scientific discourse. One of the most publicized astronomical discoveries of 2020 was in this vein. Enter ‘Oumuamua (Hawaiian for “scout”). ‘Oumuamua is, at first glance, an elongated rock that was sighted drifting through our solar system. Upon further inspection, though, it had some strange properties; it was considerably smaller than a normal comet but was around 10 times as reflective of light.

These abnormalities immediately sparked a debate over whether or not aliens could be involved. But in reality, the more interesting conversation was over whether or not it was okay to ask if aliens are involved in the first place. At the center was Israeli astronomer Avi Loeb’s book Extraterrestrial, where Loeb contends that, based on the evidence available, it is reasonable to assume that extraterrestrials are involved and that the entire debate has been poisoned by conservatism in the scientific community.

He writes that it is “commonly believed in the conservative scientific community that intelligent life is probably unique to Earth” (Loeb 167), and “To posit that ‘Oumuamua is extraterrestrial technology requires only the belief in an intelligence other than our own” (170). This opinion is controversial to some, but it is also undeniably popular. Dr. Caleb Scharf, a senior lecturer in astronomy at Columbia University, said that “there has to be a balance between what we might want to see or discover and our interpretation of data and observations, but overall there has to be enthusiasm for the quest or else it just doesn’t have a chance!”

If the idea of extraterrestrial life draws crowds, and funds, for science, then it should by no means be avoided. Maybe what is important is to consider expectations of what aliens are actually like from reality, as with new pictures indicating the possibility of fungi on Mars, it might be the case that we should be thinking smaller than seven-foot-tall grey monsters. The stereotypical image of a lanky bipedal creature with an abnormally large skull has not disappeared, however.

Many people, not members of the scientific community per se, have continued to steer the old UFOlogist myths in new, and potentially harmful directions. The modern alien conspiracy theories mostly emerge from the books of author Erich von Däniken. The most popular of his books is Chariots of the Gods, published in 1968.

Chariots of the Gods has a simple formula – von Däniken takes a historical event and questions if it was really orchestrated by beings from the depths of space. It has picked up enough of a cult following to sell 17 million copies since its first publication in 1968, and one has to wonder just how many of those are curious readers looking for a laugh and how many take von Däniken seriously.

The most notable progenitor of Chariots of the Gods is undeniably the History Channel’s hit television series, Ancient Aliens. Ancient Aliens is less overt in many ways than Chariots of the Gods, but a lot of the problematic aspects of Däniken’s book are still present. The main difference is that Ancient Aliens is presented in a much more appealing way, for a much larger audience, and is gaining more traction by the year. Its popularity can only possibly discredit actual research, benefit conservative attitudes towards extraterrestrials, and spread reactionary forms of pseudo-archaeology.

While the show can undeniably be entertaining when you come in with the knowledge that everything is a joke, there are certainly people out there who believe it as the truth – enough to fill convention centers every year. The presentation of the show, with faux ‘experts,’ does not help.

The assumptions made in books like Chariots of the Gods and its believers have driven the discussion of extraterrestrial life for decades, to the point where even sightings of fungus on nearby planets have an asterisk. Thankfully, the scientific community and conspiracy theorists occupy different enough spheres that even despite inevitable skepticism, it is not unrealistic for major developments to find legitimacy.

The real issue is that many could have their view on history altered or defined by something that they saw on Ancient Aliens. Annual conventions and an upcoming movie imply that the show is incredibly popular, so even if the vast majority of viewers and convention-goers are not taking it seriously, the show’s reach alone ensures a subset of believers. We can only hope that with time will come clarity, which will finally put the decades-old ideas of people like Erich von Däniken to rest, to make way for a more productive conversation.
Many people, not members of the scientific community per se, have continued to steer the old UFOlogist myths in new, and potentially harmful directions.