What Would Chuang Tzu Do?

The importance of the Taoist lessons of Chuang Tzu in our hectic, modern day world. 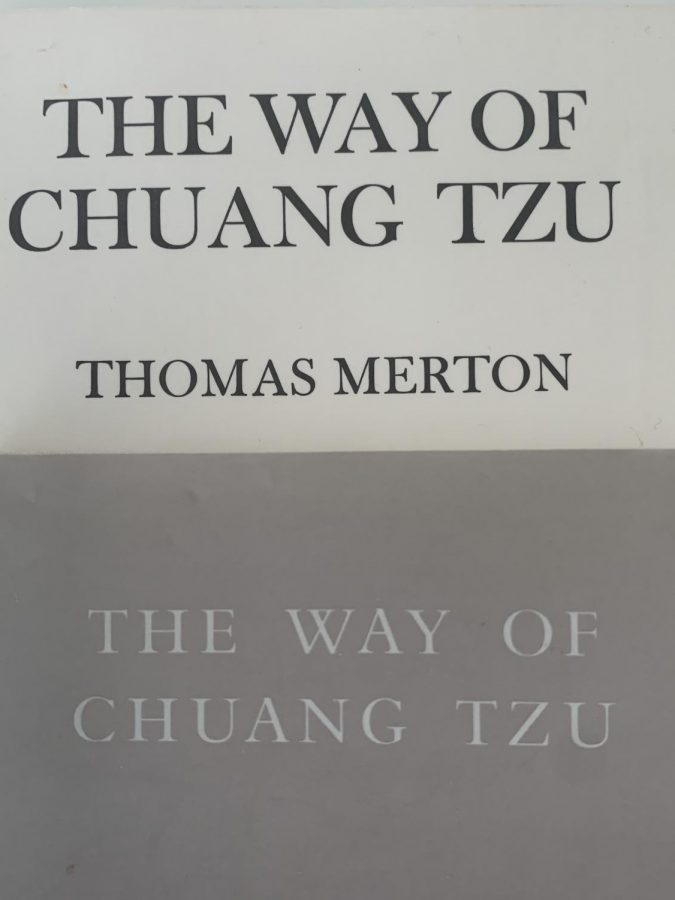 Thomas Merton, an American monk and scholar of comparative religion, put together his personal favorites of Chuang Tzu’s sayings through five long years of reading, study, annotation, and meditation, in the book depicted above.

In every corner of my house, my dad has stockpiled copies of The Way of Chuang Tzu, translated by Thomas Merton — the flimsy white paperbacks, the hardcovers with ink paintings of two Chinese scholars, and the bright yellow pocket sized versions. These books, size and color aside, are freighted with philosophical insight, infused with humor, and adorned with parables that guide us through the modern-day world like a burning beacon of light.

The philosopher Chuang Tzu was part of the flourishing of intellectualism at the end of the classic period of Chinese philosophy from 550 to 250 B.C. The Way of Chuang Tzu is an anthology of stories from both the philosopher himself and his many disciples; it represents the Taoist school of thought. Taoism entails a positive attitude towards the metaphysical and the belief that humans should live in balance with the universe. The unadorned writing style in the text is indicative of the taste for humility and self-reflection that Taoism entails. As Thomas Merton so aptly writes, “Chuang Tzu is not concerned with words and formulas about reality, but with the direct existential grasp of reality in itself.”

Importantly, The Way of Chuang Tzu emphasizes the rejection of the abyss of ambition and the push for perfection that society forces upon the individual. Chuang Tzu provides readers with a utopia in which achievement and ability are insignificant, and instead, one’s mental strength and capacity to understand the cosmos dictate one’s worth. In Chuang Tzu’s mind, a life of ambition and prosperity is a life of servitude and perpetual longing for the next best thing.

These early Taoist ideals differ dramatically from the Taoism of alchemy and superstition which developed in later centuries. The purest influence of Chuang Tzu can be seen in the Chinese Zen Buddhists of the T’ang period. The thought and spirit of Chuang Tzu transformed Indian Buddhism into a new form of Buddhism that grew in China and Japan in scholarly settings.

To further place Chuang Tzu in his historical context, the relationship between Taoism and Confucianism must be considered. Confucianism, derived from the teachings of Confucius in 500 B.C., aims to promote societal harmony by canonizing the notion that everyone plays a specific role and must act in a particular way towards others. Confucianism outlines five cardinal relationships and is based on the belief that family is more important than the individual. Overall, this belief system rests upon principles such as filial piety, obedience to authority, and emotional control.

These two ideologies intertwined during the classical period of Chinese philosophy like two vines competing for sunlight on a shade-bathed wall. While peace and prosperity conventionally enabled the arts to flourish, the zenith of Chinese philosophy occurred during the Warring States period, a time in which competing factions fought for control over China. This is when both Chuang Tzu and Confucius enshrined their dogma in text. While society was riddled with bloodshed, corruption, and sin, Taoism and Confucianism aimed to realize visions of a world that functioned in relation to the sacred.

Chuang Tzu regularly ridiculed Confucianism. Tzu’s case against Confucianism rested on the fact that it did not go far enough to promote spiritual harmony and freedom of the individual. Confucianism often led men to careers in civil service, which Chuang Tzu argued made it impossible to act creatively.

Chuang Tzu held that a man of Tao, who enjoyed solitude and silence, would never seek out the pandemonium of politics. As John Wu, an expert on Chinese philosophy, said, “To Chuang Tzu, the world must have looked like a terrible tragedy written by a great comedian. He saw scheming politicians falling into pits they had dug for others. He saw predatory states swallowing weaker states, only to be swallowed in their turn by stronger ones. Thus the much vaunted utility of the useful talents proved not only useless but self destructive.”

Now that Chuang Tzu rests comfortably in his historical context, we must consider his teachings. His lessons are golden in a world that emphasizes perfection, drowns its youth in the addictive claustrophobia of social media, and equates zen to a mere 10 minutes of meditation.

In most of Tzu’s stories, the characters are animals — monkeys, fish, birds, frogs — who embody the primitive qualities of lack of self-awareness and lack of striving for achievement that Tzu wishes people would embrace once again. As Thomas Merton notes, Tzu is “nostalgic for the primordial climate of paradise in which… man was utterly simple… living at peace with himself, with Tao, and with all other creatures.” In Tzu’s mind, this paradise has been obscured by society’s high expectations and cruelty but still lies somewhere in the back of our very own minds.

Tzu aims to pull society back to simpler, happier roots. The cardinal rule upon which the great philosophical edifice of Tzu’s teachings is built upon is apathy to both failure and success. In his parable, The True Man, Tzu writes that the most honorable people “scaled cliffs, never dizzy, / plunged in water, never wet, / walked through fire and were not burnt.” To them, failure did not entail despair and success did not entail pride. In order to embody this idea of emotional homeostasis, Tzu poses a question about the true person: “Were they cool? Only cool as autumn. / Were they hot? No hotter than spring.”

Importantly, discarding the desire for success dramatically increases the probability of success. Chuang Tzu outlines this phenomenon in his parable The Need to Win. He writes that “when an archer is shooting for nothing / he has all his skill / If he shoots for a brass buckle / he is already nervous. / if he shoots for a prize of gold / he goes blind.” Although the archer’s ability remains unchanged, the prize divides his focus and “drains him of power.”

This same principle applies to most high schoolers. We constantly fixate on goals: getting into an Ivy League school, earning an A on an essay, or winning a debate tournament. However, in order to succeed, we must focus on the path to success, not success itself. Caring too much marks the graveyard of our goals.

Inner peace is critical to success. In The Fighting Cock, a trainer of fighting cocks is in the process of training a fine, strong bird (a rooster) for the king. When the king asks if the fighting cock is ready, the trainer explains that the bird’s fiery attitude, vanity, and overconfidence all negate the possibility of a fight. However, the bird is ready ten days later. The trainer states that “when another bird crows, his eye / does not even flicker / he stands immobile… he is a mature fighter. /other birds / will take one look at him /and run.” Inner calm and balance are the greatest weapons in any fight.

The paradoxical teaching of Chuang Tzu is that you will never find happiness until you cease looking for it. Happiness does not exist in desire, in striving, or in emotional investment in a specific life path or outcome; happiness exists in nothingness, in a quiet and endless void governed by Tao. Tzu’s parable, The Lost Pearl, represents this idea. Here, Tzu outlines the Yellow Emperor’s search for his missing “night-colored pearl.” The emperor employs science, analysis, and logic in order to locate the pearl, yet he remains empty handed. However, “nothingness had it!” The pearl, like happiness, is a rare treasure that is hard to find in the vastness of the external world. However, without seeking or doing any work to locate it, nothingness can claim the invaluable pearl of happiness.

Although societal expectations, desire, and fear of failure feel as immovable as mountains in our lives, we must rewire our brains in order to prioritize our own inner calm. Reading The Way of Chuang Tzu is an important first step. This book broadens one’s horizons, serves as a pacifying force, and it promotes both self-knowledge and self-control. To find your own night-colored pearl or in order to become a truly mature fighter like the fighting cock, Chuang Tzu awaits.
The Way of Chuang Tzu emphasizes the rejection of the abyss of ambition and the push for perfection that society forces upon the individual. Chuang Tzu provides readers with a utopia in which achievement and ability are insignificant, and one’s mental strength and capacity to understand the cosmos dictate one’s worth.