The Republican Party and the Trump Dilemma

Republican leaders used to publicly speak out against Trump. Over the past four years of his presidency and beyond, they have now become some of his biggest supporters. 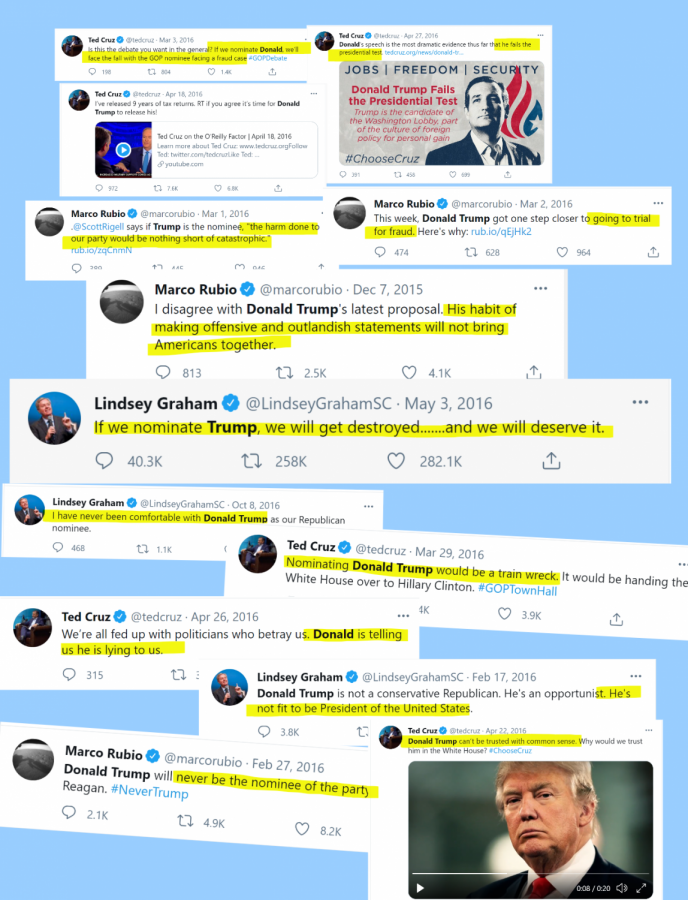 Here is a compilation of past tweets from prominent Republicans, revealing their strong opposition of Trump and how they knew the consequences of letting him have power in the Republican party. However, their recent actions have shown that they are now supporting Trump in order to boost their political futures in the Republican party, in the years to come.

Republicans have sided with Donald Trump for many years, but not all were sycophants. Though he is no longer in office as president, Trump still holds the reins of a fractured and deeply divided Republican party.  Majorie Taylor-Greene, the Republican congresswoman who was recently voted out of her committees, said in her apology speech that the Republican party is still Trump’s party. However, other Republicans in Congress, such as Liz Cheney, are urging their colleagues and their constituents to distance themselves from Trump.

Whether people like it or not, Trump remains a lingering presence for the Republican party. The majority of Republicans in the House and Senate acquitted Trump on the single count of insurrection. Today, a lot of Republicans show a wavering conscience, and a cautiousness when they are talking about Trump politics. It has not always been this way.

Lindsey Graham was prophetic with this tweet that he made in 2016: “If we nominate Trump, we will get destroyed, and we will deserve it.” He was outspoken about Trump in 2016 and even railed against him in the media, but Graham’s shift towards siding with Trump started during Brett Kavanaugh’s Supreme Court nomination, when he blamed the Democrats and Dr. Christine Blasey Ford for trying to set up a political attack that would stunt Trump’s agenda. Ever since then, Graham has personally identified with Trump, and not only with Trump’s politics. Graham is one of many Trump skeptics-turned-supporters who have realized they have struck a gold mine of devoted voters: Trump supporters. In light of recent events, especially the insurrection at the Capitol on January 6th, 2021, Graham has struggled to fully condemn Trump for his role in the riot. Instead, he takes a more ineffectual stance: “[Trump’s] going to have a place in history for all of this,” he said, despite voting for the acquittal of Trump in the Senate impeachment trial.

Ted Cruz is another widely recognized Trump supporter, but in May 2016 when he was speaking in Indiana for the primaries,  he unleashed an attack on Trump, calling him “utterly amoral” and “a narcissist at a level [he doesn’t] think this country’s ever seen.” Now, Cruz is mirroring Trump’s self-serving tendencies — he states that his reason for objecting to the certification of the November 6th, 2020 Presidential election results was because he wanted to acknowledge “the will of the people.” However, his objection was mainly because he wanted to advance his political prospects. During the Texas winter storm, he flew out to Cancún, Mexico, while his constituents back in Texas experienced power outages, frigid temperatures, and limited access to safe drinking water.

With Trump voters remaining as a powerful and devoted base, most Republicans think that it would be politically detrimental if they lost their support. Driving this fear is a ‘cancel culture’ that has traversed into the Republican political arena. Republicans who voted for Trump’s impeachment or conviction have now been censured by their state GOPs, called out on social media, and ridiculed by their Republican colleagues. In a recent CPAC speech, Trump called out the ten house Republicans and the seven in the Senate who voted for his impeachment and conviction, by each individual’s name. Given the conservative outcry against these members, it is not a coincidence that most of the senate Republicans who voted to convict Trump were not facing elections next year.

Mitch McConnell also got backlash from conservatives after his speech following his vote for Trump’s acquittal, but it appears that McConnell still cares about his political reputation amongst conservatives, saying in a Fox News interview recently that he will “absolutely” support Trump if Trump becomes the 2024 GOP nominee.

Many Republicans have supported Trump in the past because they saw Trump as a way to carry out their anti-immigration stances, to support their wealth-favoring tax cuts, and to appoint conservative judges. While in office, Trump reduced the amount of legal immigration by half, denied asylum seekers from Cuba and Venezuela, and imposed a travel ban on seven majority-Muslim countries. With the Tax Cuts and Jobs Act of 2017, Trump reduced taxes by more than two percent for the top percentage of earners, and decreased the maximum corporate tax rate from 35% to 21%, the lowest since the late 1930s. Trump was also successful in establishing a conservative majority on the Supreme Court with the appointment of three Supreme Court judges. Despite Trump’s sometimes fiery rhetoric, he fulfilled the Republican agenda.

As Trump continues to be popular amongst Republicans, most of them are finding it difficult to separate themselves from the man who has riled up a base of fervent supporters, which has changed the Republican party for the foreseeable future.
With Trump voters remaining as a powerful and devoted base, most Republicans think that it would be politically detrimental if they lost their support.