Capitol Breached, Along With Democracy

A coup of the United States Government exposes cracks in the sculpture of democracy and shows us all that white power continues to plague the nation. 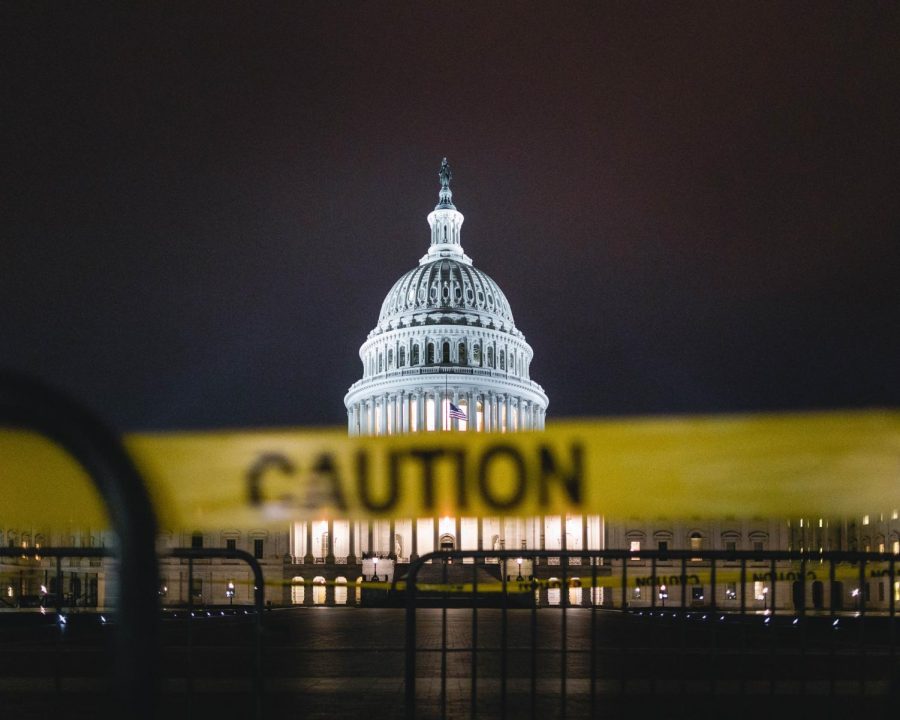 With almost no masks in sight, the January 6th, 2021 Capitol riot was a super-spreader event for the Coronavirus pandemic.

The events that occurred at the United States Capitol Building on January 6th, 2021 have been described by many Americans as a disgrace. On that day, supporters of former president Donald Trump made their way through the halls of the most recognized symbol of democratic government in the world. They carried weapons, confederate flags, and zip ties onto the premises with the intent to harm members of congress and the Vice President. The general claim by the participants was that the protest was against an “unfair election” that placed President Joe Biden in the oval office. However, that was merely a thin veil for their true intentions of anarchy, violence, insurrection and terrorism.

“It was a malicious attack on the American Presidential system, fueled by the desperate lies of a failing leader,” said Aidan Esbjornson ’21.

The news caught wind and conversation erupted. Many people pointed out the contrast between government, police and military response to the Capitol Insurrection and the Black Lives Matter Protests that took place in the summer of 2020 in response to the murder of George Floyd. The difference was clear and the message was loud.

“The response from police and law enforcement officials during these two separate situations clearly shows that there is blatant racism in the system,” said Farah Haider ’21, when asked about her thoughts on the contrast between the two major events. “The insurrection incident was perpetrated by armed white men and women and they were met with significantly less force than the peaceful participants at the Black Lives Matter protests,” Haider noted.

Haider’s sentiment carries weight in the face of evidence. During the Black Lives Matter protests in June 2020, former President Trump deployed the National Guard, that is, the actual military, against civilians. The same military that serves the purpose of protecting the very civilians they were now being tasked with “bringing under control”. It did not matter if they were gathering peacefully or not, they would be punished for exercising their constitutional rights. The unnecessary use of force and violence by the police against unarmed protesters would prove to be lethal and life threatening as at least twenty-five Americans were killed by the police activity and others even lost body parts.

Fast forward to nearly a year later in January 2021. The security forces at the Capitol were reported to have uneventfully opened the gates to the armed and clearly hostile insurrectionists and were even seen taking selfies with a few of the terrorists. The sight almost seemed to be like an elementary school field trip as the rioters who might have expected resistance to their entry, were met with none.  The rioters were armed and yet they were able to march freely through a government building that houses members of Congress. There was not a single mask in sight, and the rioters not only failed to protect their identities but also created a super-spreader event for the Coronavirus.

Amelia Volpe ’21 called it “pure hypocrisy in regards to Republican and police responses.”  As far as many people are concerned, the difference in the responses can easily be attributed to race and racism. Trump, with his repeated displays of racism basically praised the white insurrectionists for their actions but as mentioned earlier, went as far as deploying the military against peaceful protesters who were mostly Black and people of color.

In any case, matters ultimately got out of control at the Capitol. Gradually, arrests were made and as the aftermath plays out, trials are taking place as well as denials by Trump supporters that the event ever occurred. Unfortunately for them, the entire world saw their disgraceful actions. World leaders from several countries condemned the rioters, blamed Donald Trump, and expressed their disappointment.

Perhaps the most harrowing response was that of the U.S. Representative for New York’s 14th congressional district, Alexandria Ocasio-Cortez. She describes the fear she felt as rioters stormed into her office, demanding her whereabouts. “This was the moment where I thought everything was over. I thought I was going to die.” “We can not move on without accountability,” Ocasio-Cortez declared.

Even if there were room to deny racism, there is no way to deny the flagrant bias and hypocrisy. When Trump deployed the National Guard, he used clear language indicating that he wanted to put a stop to all mass protests peaceful or not. Yet he seemed to have no problem with this particular “mass protest” and uprising. In fact, the prosecutor for his impeachment trial is stating that he endorsed and incited the violence that occurred at the Capitol.

To echo Ocasio-Cortez, we absolutely can not move forward without accountability, and not just accountability of the Capitol rioters. We need accountability from the nation as a whole. America is flawed, and it is necessary to take real steps to eliminate those flaws. Racism is prevalent, and a man who made his anti-democratic tendencies clear to all was in office for four years, and it would have been eight years if determined Americans did not fight hard against aggressive voter suppression.

With a new president, there is now room for new ideas. It is a chance to do things differently and to do things better. American progressiveness no longer needs to crawl at a snail’s pace. Many people at the capitol riots were significant community leaders: teachers, military members, veterans and pastors. These are people in charge of educating and protecting the next generation. The hate and violence needs to be culled from the root, and American must, can, and will move forward.
Amelia Volpe ’21 called it “pure hypocrisy in regards to Republican and police responses.”