The Problems of Corporate Monopolies and Their Impact Upon Our Humanity

An examination of the new Gilded Age and the problems of Neo-Feudalism. 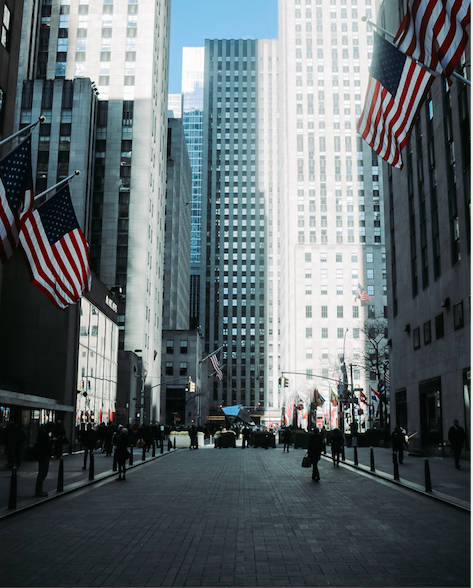 Rockefeller Center, located in Manhattan between 48th and 51st Streets, represents a monument to the sheer clout and influence that wealth such as that of the Rockefeller family can afford. Rockefeller Center consists of 19 buildings spanning 22 acres of land in downtown Manhattan, with construction started in 1931 and finished in 1939.

Ownership of the human body no longer belongs to kings or dictators. It belongs to the select few who produce all that we see, eat, and hear. Six news conglomerates form the oligopoly that casts the illusion of our choice in terms what media is currently consumed: Disney, CBS, Comcast (NBC), Viacom, AT&T, and NewsCorp own a collective 90 percent of American televised media.

To keep those in power accountable, a variety of opinions and viewpoints, and information, all must currently be available to the populace. As Thomas Jefferson once said, “The only security of all is in a free press. The force of public opinion cannot be resisted when permitted freely to be expressed. The agitation it produces must be submitted to. It is necessary to keep the waters pure.”

Access to the internet is currently owned by only a few providers: Verizon, AT&T, Sprint, and T-Mobile dominate the market. Every other internet provider owns only 1 percent of the market. Additionally, T-Mobile combined with Sprint, brings competition down from four companies to three.

It is important to note that all three of these groups have repeatedly violated Net Neutrality, the idea that internet providers shall have no control over what sites users have access to, nor giving unfair preference to certain sites. A threat to Net Neutrality is a threat to the freedom of information that the American public enjoys.

For internet sales, Amazon currently owns 50 percent of all sales that occur in the digital sphere. This electronic merchant has considerable sway over the economy of a world that is becoming increasingly reliant on e-commerce. Amazon’s activities are controlled by their own morals and they currently answer to no organization.

In the physical world, commerce remains dominated by a few select companies. For instance, Nestlé  controls over 8,000 companies, with control over 40 percent of the American food market, and they currently hold a 30 percent stake in L’Oréal, the biggest makeup company in the world. Over seventy water bottle companies are owned by Nestlé , all marketed under different names, despite sourcing water from the same place.

The people of today have little choice but to buy from these companies. Rather, we have the illusion of choice. It is an illusion that we are given, to decide what people drink, what people hear, and what enters our bodies. The power that these corporations have over us is not dissimilar to the Gilded Age of the 19th century, when entire industries were dominated by a few select men.

During the Gilded Age in America, if one needed oil, they would be forced to buy from Rockefeller. Steel was to be only bought only from Carnegie. J.P. Morgan controlled the movement of Americans on the railroads. Henry Ford famously said, “Any customer can have a car painted any color that he wants, so long as it is black.” The population had no say in who they bought from or any say in the quality of product they received.

The remnants of those monopolies remain to this day, all across the country. Rockefeller Center is a tourist attraction and one of the most famous buildings in New York City. The Morgan Library immortalizes the legacy of J.P. Morgan as a national historic monument. Carnegie Hall, possibly New York’s most famous concert hall, is named for Andrew Carnegie, a man who once hired a private military in order to disperse a strike that resulted in a massacre of ten workers. The Frick Museum is named for Carnegie’s partner, Henry Clay Frick, another well-known union buster.

What connects all of these men is the power that their companies held over every day citizens. The quality and price of their goods were in no way influenced by the desire of the consumer; instead, the price was fueled by what would make the most efficient profit margin.

What differentiates the Gilded Age monopolies of Standard Oil and the U.S. Steel Corporation from those of Nestlé or Google of today, is the sway that these modern companies have over every day activities. For instance, Google has over four billion unique users around the world, which represents over half the population of the planet, and the internet is becoming increasingly more vital to our everyday life for information, news, and media. consumption.

The laws and regulations of the past have yet to catch up with the present. Greed fuels these industries, and no free market can possibly stop them. Wealth begets wealth, and wealth generates power. And absolute power corrupts absolutely.

The limit of regulations can be largely attributed to the backlash of left-leaning ideals in response to the communist bloc’s violent methods and hostile doctrine. Especially in the United States, many liberal ideals were seen as “communist” and therefore a threat to the American way of life. Deregulation of industry, neutering of workers’ rights, and violence to social equality can see their origins in this retaliation against Communism.

Those living in the present spend each day with the consequences of this backlash. Impossible costs of living, Americans’ domination by large corporations, and a voice that gets stifled more and more each year, are all representative of this trend.

Consumers are forced to feed into the corruption that oppresses them; many consumers simply lack the ability to choose where they get their products or news. They are forced to choose convenience over everything else. Consequently, power has been taken out of the people’s hands; perhaps it was never in their hands to begin with.
The laws and regulations of the past have yet to catch up with the present. Greed fuels these industries, and no free market can possibly stop them. Wealth begets wealth, and wealth generates power. And absolute power corrupts absolutely.