The Decline of the GOP

How Republican reactions to the Capitol riot and subsequent impeachment trial have implications for the future of their Party. 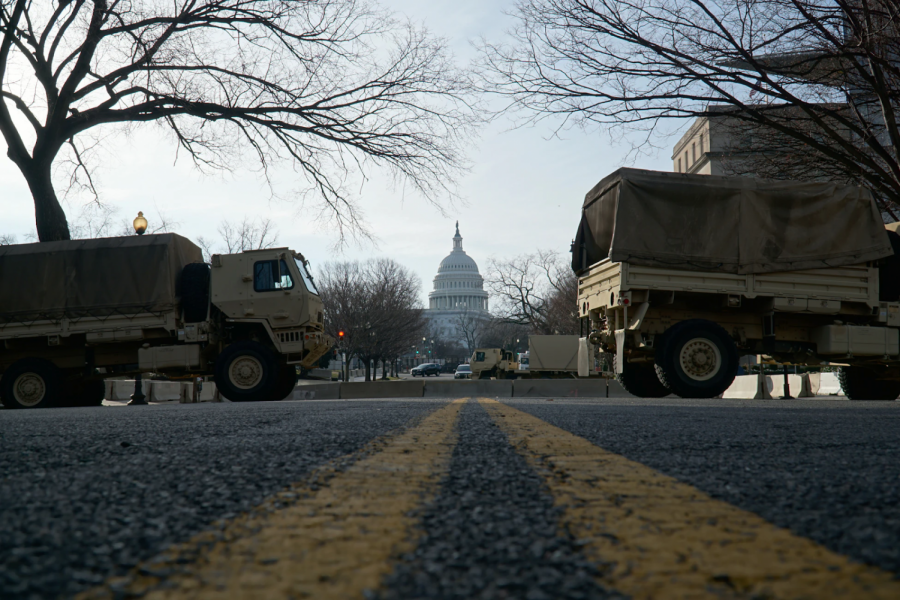 Military vehicles line Pennsylvania Avenue during the days leading up to Biden's inauguration. The violence incited by Trump created a tense atmosphere as Democrats rushed to file articles of impeachment and stave off future violence from Trump supporters.

January 6th, 2021 was a monumental day in American history in multiple ways. Domestic terrorists breached the Capitol (for the first time since the British stormed the Capitol in 1814), brought in a Confederate flag (which had never before been accomplished, even during the Civil War), and sought to overturn the 2020 election results. But most importantly, it marked the decline of the GOP through its own machinations.

Over the course of President Trump’s term, Republicans have steadily allied themselves with him, shifting from bitter rivals to his staunchest supporters. It seems hyperreal that Senator Ted Cruz once let Donald Trump insult his wife or that Senator Lindsey Graham called Trump a “kook” who was “unfit for office.” This sudden and drastic shift to Trump’s side is unsurprising; there is a reason why people call politics dirty.

Graham admitted in an NYT interview to purposely siding with Trump for his political gain. Graham told the interviewer, “If you don’t want to get re-elected, you’re in the wrong business.” The Republican strategy for four years has been to support Donald Trump in order to gain support from his supporters and to push through the Republican agenda, but their investment in Trump and Trumpism has backfired.

Donald Trump has cost the Republicans the House, the Senate (with Jon Ossoff’s and Raphael Warnock’s runoff wins in Georgia on Jan. 6), and the presidency. Trump’s accusations of election fraud culminated in the storming of the Capitol and the deaths of five people. The GOP’s willingness to go along and support these claims fueled the very embers of the insurrection which has put the GOP in a bind. These events shocked Americans and the world alike, drawing condemnation from both Democrats and Republicans.

After four years of scandals and allegations of abuses of power, the Republicans could no longer unwaveringly defend Trump. The riots and insurrection on January 6th, 2021 were too unpopular. People called it an assault on both democracy and the entire nation. No politician could risk outright supporting the violence as it would be too risky to do so.

When the House and Senate returned to session, Republicans rushed to condemn the riots and violence, even as some continued to reiterate the false claims of election fraud in an attempt to overturn ballots from swing states.

Now the Republican Party has to find a political path post-Trump, with some wanting to divorce from Trumpism as others continue to embrace it. The split in the party was visible even before the chaotic events, with party leaders like Mitch McConnell urging his members to certify the electoral vote, while other members, including Ted Cruz, sought to ally themselves with Donald Trump and object to the votes. Former Vice President Mike Pence put out a letter stating he did not have the authority to overturn the ballots and would only perform his duty as president of the Senate. Meanwhile, Senators Ted Cruz and Josh Hawley attempted to crown themselves the heirs to the MAGA empire by signing on to letters rejecting ballots from certain states.

What started as a popular but futile demonstration of support for Trump ended as an insurrection, leading to several senators withdrawing their signatures from opposition letters. January 6th, 2021 set the stage for calls to invoke the 25th Amendment and to commence Trump’s historical second impeachment, which posed another obstacle for the GOP.

Former Vice President Mike Pence refused to invoke the 25th Amendment, but the Democrats’ articles of impeachment went through. The House voted to impeach Donald Trump for the second time, faulting him for inciting violence. The 232-197 vote was bipartisan, although only ten Republican representatives voted to impeach.

Although Mitch McConnell has indicated support for Trump’s indictment, he voted nay in a vote to determine the constitutionality of impeaching an ex-president twice (even after House impeachment managers presented their case). He then voted ‘not guilty’ based on the questionable constitutionality of impeaching a former President (though he purposely delayed the trial).

However, on February 13th, 2021 the trial concluded, and the measure to impeach Trump fell short. Only 57 senators voted guilty. All Democrats and Independents voted to convict, while only seven Republicans did the same. NPR reported, “The Republicans in favor of conviction were: Bill Cassidy of Louisiana, Richard Burr of North Carolina, Susan Collins of Maine, Lisa Murkowski of Alaska, Mitt Romney of Utah, Ben Sasse of Nebraska and Pat Toomey of Pennsylvania.”

Reportedly many Republican senators ignored the trial proceedings, choosing to read newspapers, doodle, or stare at a map. Senators Lindsey Graham of South Carolina, Ted Cruz of Texas, and Mike Lee of Utah even met with Trump’s defense attorneys beforehand.

The GOP has rapidly shifted its message to one of bipartisanship and unity in order to save face and to move past their actions that led to the riots. However, their message fell short due to the fact that many Republican house members still refuse to acknowledge the integrity of the elections. Their actions during the trial convey clear partisanship.

There have also been reports that certain Republicans might have been colluding with the rioters. Lauren Boebert has come under fire for giving tours to rioters a day before the insurrection.

McConnell is said to have hoped for a clean break away from Trumpism in order to preserve the GOP, but ordinary and congressional Trump supporters appear to be diverting away from McConnell’s goals. Donald Trump has touted the possibility of forming his own political party, called the Patriot Party, after feeling slighted by top Republicans’ criticisms of his actions regarding the insurrection. Many of his supporters echoed support for such an action on Parler, a conservative social media platform.

The Republican party is splitting; McConnell voted not to impeach Trump, but he gave a speech post-vote blaming Trump for the insurrection inciting anger from Trump supporters and some GOP politicians. McConnell is desperately trying to walk a tight-rope between supporting Trump and condemning the lies and violence that Trump promulgated. Unfortunately for him, his political maneuvering is failing as his colleagues fan the flames of Trumpism.

The GOP is destined to collapse; the base of its voters is composed of Trump supporters with no loyalty to the GOP. When Mitt Romney boarded a plane the day after his vote to confirm the electorate votes, Trump supporters chased after him in the airport, screaming at him and calling him a traitor. The same happened to Lindsey Graham, which highlighted the extent of Trump supporter’s loyalty to a single man rather than a political party.

They can continue to rely on supporting Trump, but that means there is no future in the GOP beyond him and with possible future prosecutions against him, this is not a good sign. If Trump is convicted, the GOP faces its true test of loyalty, and if they choose a criminal, they will destroy America alongside their own Party.
McConnell is desperately trying to walk a tight-rope between supporting Trump and condemning the lies and violence that Trump promulgated. Unfortunately for him, his political maneuvering is failing as his colleagues fan the flames of Trumpism.