The Poetic Musings of a Modern Day John James Audubon

A series of vignettes on New York City birds spotted through the four seasons. 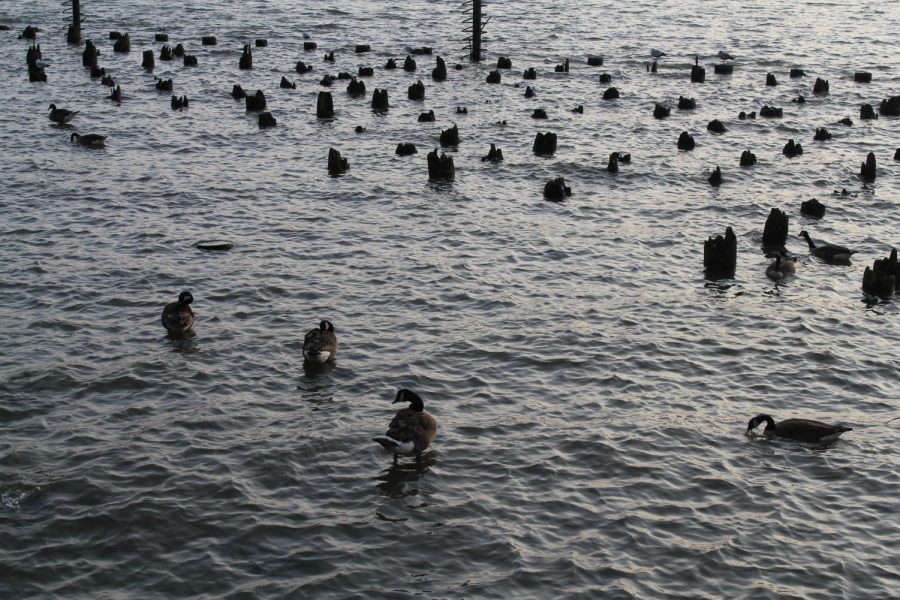 Spring, and geese are seen throughout New York City.

I care for nothing more than birds.

There are times where there is nothing but the pigeon. A grey dancer twirling his tongue to the hum of life, he thumbs through the pages of being. He is discreet yet flamboyant, a living paradox, hiding from us those answers to which we seek behind those pallid, ruby-orange eyes. And we cry. Or? No, we cannot cry. We do not even know where to begin. He cries. Or? He does not cry. He laughs. Or? He cries. No. He does laugh. He does not cry. No. He cannot laugh! Or cry? What is it then? Not both, not neither, not nothing, not anything — it is there. Nothing is but the pigeon.

He fights, he drinks, he lives, he dies, and then lives again. He flies over the Übermensch leaving us only a pale memento as a reminder of his life — a whiteness! A remembrance of past purity.

I have never seen a dead sparrow. Or perhaps… I have? His feathers coalescence with the soil in tawny peace and seem to us imperceptible, our earthly iris failing in view of him. And if I ever could see one of these dead sparrows, I would hold him in my hands. Kneeling before the sky in the middle of oaks and humming grasses, I would save him from oblivion. I would see him quiver then flutter away, leaving me alone, watching that airy body shiver in joy for very life. I am not alone… There are too many birds to ever be alone.

At my corner of the Van Cortlandt Park, where the stray cats live, frequent a blue jay and a cardinal. When they come to me, I cannot help but be reminded of John Donne’s poetry, both ‘two and one’ in the same. That crimson sheen and that icy flowing blue whisper to each other words that could never reach our ears. I feel as if I become a yellow warbler amongst their child-like hops and prattlings.

Beyond Van Cortlandt Park, in Tibbetts Brook Park and Central Park, my world grows with the frame of the birds. They become ducks, geese, herons, and even swans. Swans seem particularly drawn to me.

One in particular, dubbed Monsieur Swann of La Tibbetts, always followed me through my walks. He seemed lonely, solitarily swimming through the lake, surrounded by a ceaseless array of geese and ducks. How terribly desolate life must be for him, I thought, when I found myself at the edge of the lake where water drenched the pebbles and nothing could be felt but the reverberations of an infinitude of ducks.

I saw the mothers leading their children gently into the depths, the fathers scurrying from the abyss to the family, and the children frolicking and playing in the bushes and trees of a miniature island made by a crossroads of soft water leading into the lake. Even the heron, that still silhouette of life, had company; I saw it when she heaved the earth before taking flight with him up to the sky’s canopies. Yet there was nothing pitiable about Swann’s solitude. Rather he appeared majestic, and at the same time, a great klutz. I felt honored to have my existence acknowledged by such a being… And instead of him confiding in me, I found myself seeking his companionship. It is in instances like these that we can come close to perceiving truth. I found truth in those days within the feathered whiteness, deathly silent, drizzled by the midsummer days — in his mute singing: the essence of all.

I am reminded of hawks. I heard one sing.  It is uncommon to hear one so close to my residential neighborhood but I heard her. Her cry echoes across the desolation of my neighborhood streets amidst the COVID-19 pandemic. I feel my senses eclipse and shatter. That sound — I knew it to be a hawk as soon as I heard it. Or could it have been a kestrel? Or even a falcon? No, I knew — it must be a hawk. But where? I stared into those ever-swaying spring leaves almost hazily singing to me. Oh, what I would do just to see this hawk!

Not everyone has such a passion for birds, however.

“Where did you take that? Cause I’ve heard hawk cries near our neighborhood.”

He had confided in me a photograph of that mystery hawk in late autumn.

I have lied. Everyone has a dedication to birds. My friend is demonstrative of that. His actions tell me that. What does it matter whether he knows the word for it? If his knowledge is lacking? At the end of the day, he was gripped by an emotion, an urge to capture the bird in his memory. There is no need for words in light of such honest feeling. In anything else there is deception birthed from a self-deception of phrases: “O Hawk! My only reprisal from melancholy!” or “Why it is simply but a hawk! No reason to take a picture — not even to glance at! No, no, no!” It is not just a hawk, it is an owl.

Have you seen one? I have — in Central Park. I have seen barred owls, great horned owls, barn owls, saw-whet owls, and so many more phantoms. In the night, their celestial nocturnal frames, with feathers ruffled, are highlighted against the moon’s reflected light. To see one, and have it stare back at you, that is fear; I tremble… They have recently spoken to me of strange events. There is a rumor going around the streets — they say that a snowy owl has come here to Central Park. They hand me photographs, stories, and smiles, but alas one must see such things for themselves. If it is true, it will be the first one seen in 130 years… It is astounding that it has been 130 years since we have been able to perceive her.

Indeed, it seems to me that certain birds have appeared before us recently that rarely came to us before. A few days ago, I saw a murder of crows outside my window.

I have heard. A new yearning cry…  I cannot know if anyone else has. Their visages seem unperturbed — I think… I cannot be certain. I mean — my soul reverberates: I am lost. If they frowned, flew through the wind, or screamed — I could not say. All I know is I have heard. I cannot speak on them. No, I have lied again (for the first time). I want to be honest. I know more. I know the sparrows have gone silent (perhaps they have finally left the city) and the gray no longer dances. I know the sky is endless and the water is endless. I know I am sleeping. I know I feel. I know. It is there. I know it exists. In my heart.
I am not alone… There are too many birds to ever be alone.