Before moderate Democrats place the blame for down-ballot losses on progressives, the party should reconsider their performance in 2020. 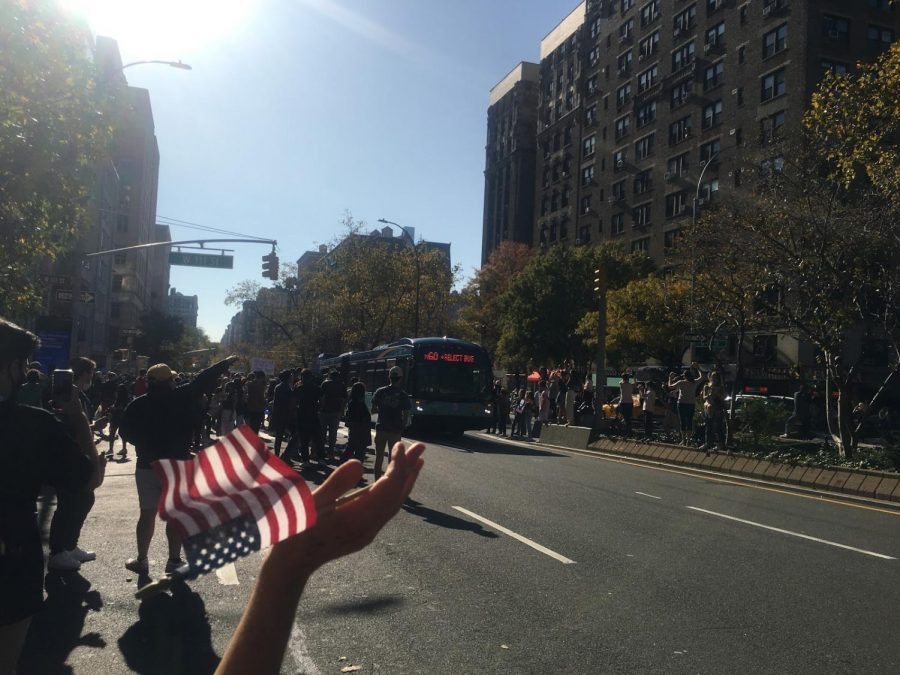 When Joe Biden was projected the President-Elect of the United States on November 7th, 2020, people flooded the streets of New York City in celebration. But many of Biden's priorities as President may be obstructed by Democrats' inability to win an outright majority in the Senate and expand their majority in the House.

Democrats who wanted the November 2020 elections to be a rebuke of not just President Trump, but also of his brand of politics, watched the results roll in on November 3rd with disappointment.

No such rebuke came.

Sure, Joe Biden won the presidency with the largest share of the popular vote of any challenger to an incumbent president since 1932. He and Vice President-elect Kamala Harris won over 81 million votes, the largest amount of votes for any Presidential ticket in history. He rendered Donald Trump a one-term president, an embarrassing end to an already chaotic and disastrous tenure.

But while voters renounced Donald Trump, the man, they refused to renounce Donald Trump, the party, which is what the Republican Party has transformed into since 2016. The GOP has become synonymous with Trumpism, and a slew of bullish polling in the weeks leading up to the election made many Democrats hopeful that Americans would choose not just to reject Trump himself but also punish the cronies who facilitated his rise and unfailingly supported him.

This, of course, did not happen. Despite most election-forecasting sites predicting Democrats to expand their majority in the House of Representatives and win an outright majority in the Senate, the elections ended in disappointment for many down-ballot Democrats. As of this writing, the GOP flipped 13 seats held by Democrats in the House. Republican candidates held onto Senate seats in states that many expected to flip blue, like Susan Collins in Maine, Thom Tillis in North Carolina, and Joni Ernst in Iowa.

These losses were made even more painful due to how high expectations were. “I was honestly shocked by some of the election results,” said Lily Womack ’21, Secretary of Bronx Science’s political club Current Events Forum. “I guess I expected Democrats to do a lot better across the country.”

Before the elections, Democrats had invested massively in races that would normally be long shots but seemed plausible in an expected blue-wave year. Millions of dollars in donations poured into the Senate campaigns of Democrats in traditionally conservative states, such as the campaigns for Jaime Harrison in South Carolina, MJ Hegar in Texas, and Amy McGrath in Kentucky. Harrison broke fundraising records in the final quarter of the race, bringing in a whopping $57 million dollars in donations. This money was of little avail: in the end, he lost to Graham by over 10 points.

The disappointments for Democratic candidates on November 3rd forced a reckoning within the party over what — or who — was responsible for the failures.

Moderate members of the party quickly directed blame towards progressives. On a tense Zoom call amongst House Democrats the Thursday following the election, Representative Abigail Spanberger of Virginia’s 7th Congressional District mourned the losses of many freshman incumbents. “We lost members we shouldn’t have lost,” she said, in a leaked audio recording. Spanberger attributed these defeats to leftist policies she claimed were weaponized against Democrats, even those who did not support them. “Attack ads work…we need to not ever use the word socialist or socialism, ever again,” she said.

These sentiments — that progressive policies like defunding the police and passing Medicare-for-All doomed down-ballot Democrats — were widely echoed by other moderates. Representative Conor Lamb of Pennsylvania’s 17th Congressional District, which voted for Trump in 2016, stated after the election that progressives “are advocating policies that are unworkable and extremely unpopular.” Joe Biden and Barack Obama also both criticized “defund the police,” with Obama dismissing it as a “snappy slogan” that was counterproductive for Democrats who were actually serious about criminal justice reform.

But moderates’ claims that association with progressive politics was the death knell for Democrats on November 3rd ignores the much larger problems confronting the party.  If voters in Spanberger’s and Lamb’s districts could not understand that Spanberger and Lamb themselves were opposed to defunding the police, that is the fault of the candidates, not the fault of the activists who pushed the slogan.

The real problem facing Democrats in 2020 was not Republicans crying wolf about “radical socialism,” but Democratic candidates’ incompetence at rebutting these attacks. Frankly, Republicans should be easy targets for Democrats to destroy in campaign ads — they have more than their fair share of scandals and disgraceful policy positions. Many Republicans, for instance, support the repeal of Obamacare, which provides affordable healthcare to millions of Americans and was supported by 62% of respondents in a September poll. Most Republican candidates for House and Senate seats were also in favor of overturning Roe v. Wade, a step that 66% of Americans oppose.

Republicans are quite literally against saving people’s lives: the GOP fervently supports President Trump, whose devastating, irresponsible approach to the Coronavirus pandemic has left hundreds of thousands of Americans unnecessarily dead. They are the party of feigning support for the poor even as they excuse corruption: when The New York Times revealed Trump paid only $750 dollars in taxes for the first year of his presidency, he received no rebuke from Republicans. They are also the party of conspiracy theorists: Congresswoman-elect Marjorie Taylor Greene, for example, was endorsed by Trump despite her believing in the conspiracy group QANON and expressing doubt about if 9/11 or the Holocaust really happened. Just last month, Congressman-elect Bob Good, also endorsed by Trump, called the pandemic “phony.”

These are the people, policies, and values that represent the Republican Party — far more insidious and inhumane than any policy touted by Democrats. Why is it, then, that Republicans can weaponize policies that their Democratic opponents do not even support, but Democrats are unable to demonstrate the clear dangers and failures of the GOP?

Alexandria Ocasio-Cortez, Congresswoman for New York’s 14th Congressional District, believes that the problem lies in Democratic messaging and outreach. In an interview soon after the election, she pointed out the flaws in moderates’ arguments about progressives. Ocasio-Cortez said, “These folks are pointing toward Republican messaging that they feel killed them, right? But why were you so vulnerable to that attack?”

One of the reasons behind Democratic vulnerabilities was because of the party’s utter failures to invest in digital advertising and voter outreach year-round. Ocasio-Cortez said in the interview, “Our party isn’t even online, not in a real way that exhibits competence. And so, yeah, they were vulnerable to these messages, because they weren’t even on the mediums where these messages were most potent.”

She isn’t alone in this sentiment, either — this failure was also pointed out by more moderate Democrats, like Senator Doug Jones of Alabama and former Senate candidate Beto O’Rourke. All three of them argued that Democrats do not invest enough time and money in developing a national infrastructure of party support and voter outreach. Many Democratic strategists had hoped Texas would flip blue this year, not just at the Presidential level but also in the Senate and many House seats. O’Rourke argued in an email to supporters that the reason this did not happen was because “the border, from the Rio Grande Valley to El Paso, has been ignored for years by the national party, and even many statewide Democrats… the failure to invest in year-round canvassing — so that voters don’t just hear from us during an election — made [winning in Texas] harder.”

These failures are exemplified by the campaign of Sara Gideon, the Democratic Senate candidate in Maine. When Gideon announced her campaign in 2019, she seemed like the perfect candidate to defeat incumbent Senator Susan Collins. Collins is considered a moderate Republican but incurred Democrats’ wrath when she voted to confirm Justice Brett Kavanaugh to the Supreme Court. Despite the excitement around Gideon’s campaign, she wound up losing by 9 points, even as Democrat Joe Biden won by the same margin — a level of ticket-splitting that perplexed many liberals.

Confusion over Gideon’s loss may be resolved by the fact that of the 23,000 ads she ran on Facebook, not a single one used the words “jobs” or “economy.” Gideon’s campaign lacked a clear message on how electing her would change Mainers’ lives — instead, she chose to hammer Susan Collins on being too loyal to Trump and spoke vaguely of increasing access to healthcare. The New York Times explains that these attacks did not land on Collins, who was busy running a campaign that avoided Trump and instead emphasized Collins’ long career in the Senate. Although I disagree with many of Collins’ political stances, she did articulate genuine ways that she wanted to improve her constituents’ lives, and Gideon failed to do the same.

This is a problem for Democrats across the country. Economic messaging is one of the most effective tools at winning votes, but Democrats consistently fail at putting their economic policies and priorities in accessible terms for voters. Soon after the 2020 elections, the voter group VCNS conducted an in-depth study of which ads were most effective in increasing support amongst young voters, Black voters, and Latinx voters. Across the board, the most effective messages were economic ones. In Wisconsin, for example, digital ads focused on how the Coronavirus pandemic affected the economy drove twice as many Black voters under 45 than did general messages about COVID-19. In Michigan, some of the best-performing ads were those that explained the Republicans’ role in blocking a Coronavirus relief bill that could help the economy recover.

Had these messages been adopted and aggressively marketed by Democratic candidates, perhaps the party would have suffered fewer down-ballot losses. Unfortunately, the media group Digiday explains that Democrats have continued to focus on traditional media, like TV and print ads, rather than developing a digital strategy. The problem is not a lack of money, but a lack of action — after all, Sara Gideon ended her Senate campaign with nearly $15 million left in the bank.

The lessons that Democrats should take from November are not that they failed — not by a long shot. Instead, the lesson is that we should have done better than we did. Democrats are on the correct side of so many political issues, something that should have enabled them to win landslide victories in a political environment where Americans are exhausted by the Coronavirus pandemic and facing rising costs of living, lower wages, and a lack of access to healthcare. Maybe Republican attack ads were just too effective, and maybe better digital strategies could not have saved every House member who lost re-election. But there is no excuse for not even trying to adequately invest in these messages and voters that could have made a crucial difference in shaping a better country.
Why is it, then, that Republicans can weaponize policies that their Democratic opponents do not even support, but Democrats are unable to demonstrate the clear dangers and failures of the GOP?