A Bull Market in a World of Bearish Trends

As the unparalleled events of 2020 have shown, the stock market does not match economic reality. 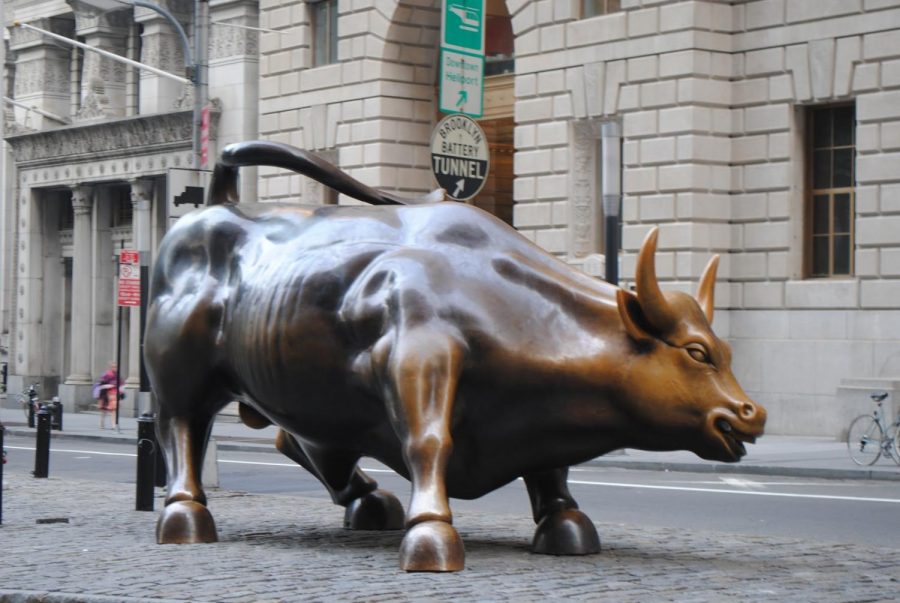 Wall Street’s iconic Charging Bull statue is a symbol, among other things, of strong American economics and politics, yet this sculpture representing rising financial markets is currently in the backdrop of economic downturn for many Americans.

As the NASDAQ hits new milestones and the S&P 500 rises further into record territory, dissolving the pandemic-induced plunge in March 2020, the reminder that “stocks are not the economy” is in heavy rotation among investors and market experts. Despite the unprecedented positive trends in the markets, the nearly double-digit unemployment rate, increased number of retailers filing for bankruptcy or liquidation, and immense economic slowdown over the path of the COVID-19 pandemic delineate how stocks are not a reliable gauge of overarching economic health.

With President Donald Trump boasting about the rise of major market indices on Twitter and graphs with ever-increasing trends, it is easy to fall into the mindset that our economy is performing well. However, indices, such as the Dow Jones Industrial, have been rising for decades and only represent the success of a small portion of the American population. Major measures, including the S&P 500, are curated lists of companies that portray particular slices of markets where companies trade. But we all have a stake in the stock market, right? Not necessarily.

The majority of Americans are not significantly impacted by the rise and fall of the markets. An in-depth poll conducted by Gallup, which investigated the source of household-owned stocks, indicated that a modest number of Americans, approximately 55%, own stocks. In 2020, when asked how much they rely on individual stock or stock mutual fund investments as a source of income, a majority of 85% indicated stocks were not a major source. Government studies from the Federal Reserve show that only about one-third of families in the lower half of income scales had stock holdings in 2016. Moreover, the return of the S&P 500 index at the beginning of 2020 was attributed to just six major stocks, including Apple, Amazon, Facebook, and other major corporations, which not everyone owns. Hence, the market and its prices can be disproportionately influenced by a minuscule subset of the general population.

The economy, on the other hand, is the sum of goods and services of all items we produce. At every level of every industry and profession, all of us influence the entire economy — unlike the stock market. “Wall Street has very little to do with Main Street,” said Joachim Klement, a market analyst at Liberum Capital in London, “and less and less so.”

In reality, millions of people have filed unemployment claims, and food bank lines continue to grow due to the uncertainty driven by the current pandemic. According to the Congressional Research Service, the U.S. unemployment rate peaked at an unprecedented level in April of 2020, not seen since data collection began in 1948, at 14.7%. Since then, the alarmingly elevated rate declined to a still-high level of 6.7% in November 2020. Last month, a survey by the Center on Budget and Policy Priorities found that nearly 83 million adults reported it was somewhat or very difficult for their household to cover everyday expenses.

Yet, in November 2020, the DOW and S&P 500 also hit record highs as reports of progress in developing a COVID-19 vaccine arose. This all occurred just months after the terrifying market drop was seen in March 2020 as the effects of the pandemic initially hit.

While financial markets are heavily covered by CNBC and other major news channels popular in many households, the stock market and the economy are not synonymous. There is far more to the economy than the enticing displays of bull markets, and these stock prices should not divert our attention from the underlying “bearish” economic trends.
“Wall Street has very little to do with Main Street,” said Joachim Klement, a market analyst at Liberum Capital in London, “and less and less so.”