The Controversy of Banned Books in American High Schools 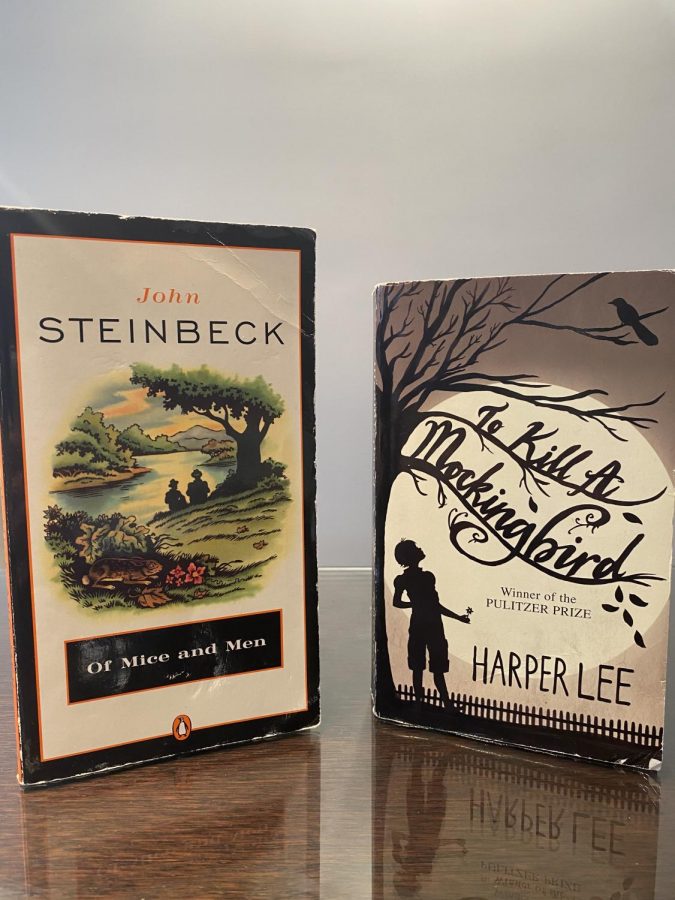 Two of the most well known classic 20th century American novels, 'Of Mice and Men' and 'To Kill A Mockingbird,' are also considered to be controversial in some school districts across America.

In classrooms all across America, the discussion of literature opens up its insightful visions to students who wish to learn and analyze these texts. Whether they are well-known classics or breathtaking new novels, these literary works inspire students and introduce new themes and ideas to them. However, schools in many parts of America have historically restricted which books students can read, from the works of George Orwell to John Steinbeck. Are schools justified in censoring literature just because parents or administrators deem their contents inappropriate?

Books allow students to explore human nature in an eye-opening and fascinating way, even if it includes the worst of it. Books that highlight the flaws of human nature are often those that are banned in schools. This restricted area of literature includes books such as Brave New World, Of Mice and Men, The Lord of the Flies, 1984, To Kill a Mockingbird, and The Catcher in the Rye. At Bronx Science, we have the opportunity to read all of these books, as they are all approved by the New York City Department of Education through NYSTL (New York State Textbook Loan Program), but in some areas of this country, students do not. These limitations have even catalyzed the creation of Banned Books Week, a time in September each year to celebrate the freedom to read that many schools do not acknowledge.

One reason that books should not be banned in schools is because it is not up to others to limit what students read just because of their personal preferences.  There are some books that are inappropriate or too graphic for students in the lower grades to read, but regardless, those books should still be available to older readers whose intellectual level matches the content. When asked, “Why do you think some of these books have been banned in schools,” many Bronx Science English teachers responded with “fear.” One, Mr. Alex Fontini, went into more depth, stating, “I think that fear of certain ideas among parents, teachers, administrators, and government officials (across the political spectrum) is behind the banning of these texts. They’re worried that if students encounter ideas or behavior they find objectionable in the texts they read, they might embrace those ideas or behaviors.”

However, this is often not the case. In fact, literature that discusses controversial topics opens up the realism of them and allows students to understand human nature without experiencing certain things that could put them at risk. In a Washington Post article by Regan McMahon, she writes, “Exploring complex topics such as sexuality, violence, substance abuse, suicide and racism through well-drawn characters lets kids contemplate morality and vast aspects of the human condition, build empathy for people unlike themselves and possibly discover a mirror of their own experience.”

Some make the argument that the information presented in these books is triggering, inappropriate, or could even incite violence. These are some of the things the ALA lists as reasons why certain classics are banned or challenged in schools, but in the books named above, there is limited use of inappropriate or graphic language. Even so, that is not a pressing factor that should prevent schools from allowing mature students to learn about their subject matter in a classroom. A work of literature should not be defined by its graphic language and mature themes; rather, it should be judged by the overall range covered in the work and the weight that its ideals carry.

Furthermore, if a book poses dangerous or new situations to its protagonists, it can show students how to approach such dilemmas. Bronx Science English teacher Ms. Kristen Parness said, “Banning any sort of literature is dangerous, in my opinion.” Parness expresses the severity of banning books well through her statement; if students are shielded from the controversial topics brought up in books, then not only does it prevent them from learning about the real world, but it undermines the importance of open discussions about these important issues and the subject matter of the book.

There are better ways of addressing the issue of controversial content in books rather than the outright banning of them. English teacher Ms. Leslie Berger shows this best from a teacher’s perspective when she simply states, “Closing minds isn’t our job.” As a Bronx Science student who has personally read many of the classic novels deemed to inappropriate in other parts of this country, I truly believe that these books should not be banned. Being a student is not only about completing assignments and learning to analyze texts, but about opening our minds to thinking about mature topics and then reflecting on those profound ideas.
“I think that fear of certain ideas among parents, teachers, administrators, and government officials (across the political spectrum) is behind the banning of these texts. They’re worried that if students encounter ideas or behavior they find objectionable in the texts they read, they might embrace those ideas or behaviors,” said Mr. Alex Fontini, English teacher at Bronx Science.