Is Our Obsession With Persona Eroding American Democracy? 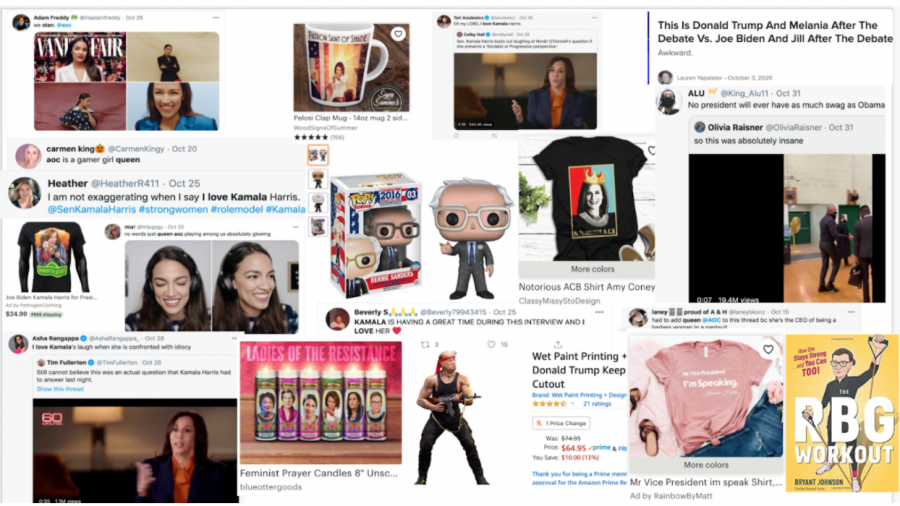 Online political discourse can blur the line between politicians and celebrities.

The influence of public image on politics is hard to miss. Media and public discourse are saturated with ruminations on politicians’ family lives, their physical appearance, or their most recent witty clapback. Public narratives assign terse descriptions to politicians, ranging from ‘sweet,’ ‘cool,’ ‘honest,’ ‘family-oriented,’ to ‘reserved,’ ‘blunt,’ or ‘strong.’ But do these narratives overshadow what really matters? When politicians are treated like celebrities, what does it mean for our democracy?

This issue is especially visible with our current president. Throughout his initial campaign, Trump’s views on issues like abortion, immigration, and healthcare shifted frequently, and he offered very few plans to achieve his goals, yet his popularity only grew. His fiercely devoted supporters parroted his remarks, lining up in droves to attend his rallies, and putting his name and slogan on their signs, flags, clothes, and even cars. But if not for Trump’s policies, what was it that drew so many people to him? For many, it was the image that he crafted of himself: a voice of change, a true businessman, the epitome of success, and a disruptor of the status quo. The Trump campaign was aware of the advantages of this image and continues to exploit it. According to reports from the Federal Election Commission filings, his campaign spent far more on items such as signs, hats, and clothing, rather than on polling. Building up Trump’s cult-like following was crucial to his success. Many voters did not care about electing a politician with carefully crafted policy plans as much as they cared about electing a politician that represented what Trump did.

Although the left may not be as ready to embrace symbols over substance, it is certainly not immune to doing so. Representative Alexandria Ocasio-Cortez, the youngest woman ever to serve in the United States Congress, has what resembles a fanbase. With just one quick Google search, you can find t-shirts, mugs, and posters with her name and face. While the achievements of Congresswoman Ocasio-Cortez and others should not be overlooked, some of the ways that they are discussed and viewed can be unsettling. It makes sense for people to be drawn to her charisma, to admire her advocacy, and to be excited for her work in the future of the Democratic party. But when we begin to say things like “stan AOC,” or obsess over her video game live stream, what are we missing?

While many might think this celebrity-like obsession seems harmless, it is, in fact, incredibly dangerous to American democracy for two main reasons: first, it drowns out discussions of their problematic actions, and their beloved persona provides an easy way to gloss over any criticisms. For instance, former President Barack Obama’s charisma and charm allowed many to look past his policies they would likely disagree with. When public discussion centered on his humor or his adorable dogs, it was easy to disregard his harmful actions, such as ordering a total of 563 drone strikes targeting Pakistan, Somalia and Yemen, and killing a number of civilians, or his complicated track record with immigration.

Secondly, centering persona instead of policies and plans only continues to feed the power of superficial charm over substance. This allows for the continuation of this vicious cycle which drags us further and further away from determining who is actually protecting and improving the lives of Americans. It is increasingly strategic for politicians to use this phenomenon to their advantage. Trump can use public outrage to direct focus away from his failures to the American people. It is not enough for us to call out President Trump’s lack of professionalism. Criticizing a politician’s persona does nothing to disrupt the spectacle itself. Whether we are outraged or adoring, we are still playing into this destructive phenomenon.

Now, this does not mean that we should not criticize the ways in which the words of President Trump and other leaders perpetuate racism, sexism, xenophobia, or bigotry. Trump’s words embolden white supremacist groups. This is not just optics — it directly harms marginalized groups. Pointing this out does not mean we are obsessed with persona, nor is it harmful to our democracy.

When we are furious at Trump’s latest tweet, or obsessing over a beloved politician’s latest witty clapback, we become distracted. Protecting our democracy means letting go of our fascination with persona. This might not be an easy task, given that media narratives and public discussions seem to value a politician’s image over their actual policies and influence.

Of course, relinquishing this idea does not mean never focusing on what politicians say. Certain statements are outright false, bigoted, or dangerous. Highlighting and correcting them is not part of this obsession with persona — in fact, it is absolutely necessary. It is in both our own self-interest and our civic duty to constantly criticize, analyze, and hold our politicians accountable. Ultimately, being an informed political citizen means dissecting the constant stream of information and opinions that we receive, and knowing what deserves criticism or praise, or what is simply a distraction.
Although the left may not be as quick to embrace symbols over substance, it is certainly not immune to doing so.