American Studies in the Age of Trump

Donald Trump’s call for “patriotic” American history education is a startling reminder that unpacking the incongruence between our nation’s ideals and its history is essential to the livelihood of democracy. 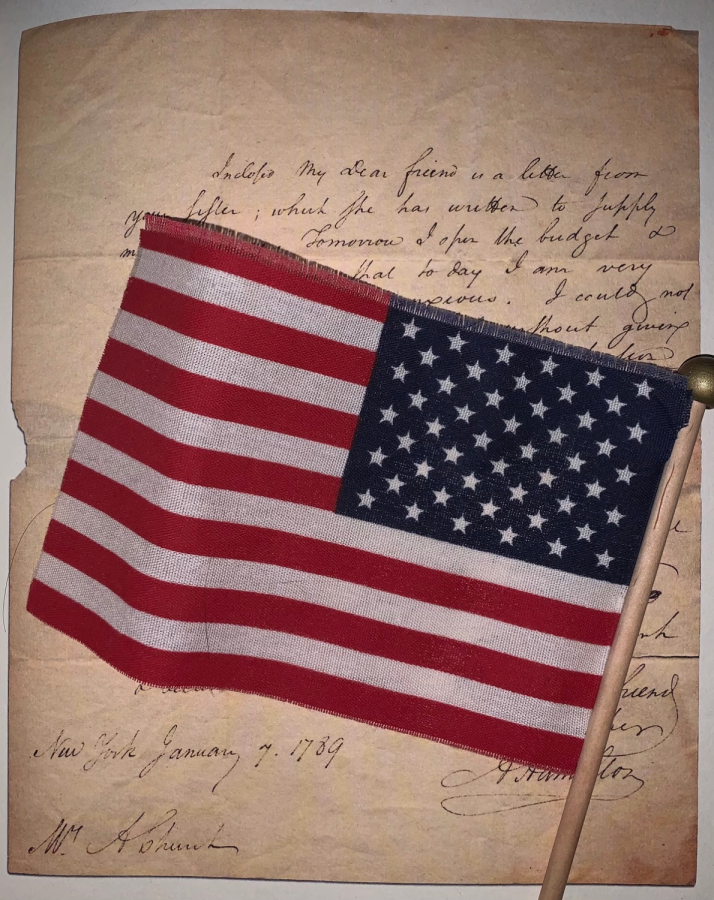 An American flag looms over a primary source document, one that is similar to documents that Bronx Science students analyze in their Advanced Placement American Studies classes.

Standing before the Constitution at the National Archives on September 17th, 2020, Donald Trump unveiled the “1776 Commission,” a national committee tasked with promoting  “patriotic” history education throughout the American public school system.

His voice echoing across the marble walls of the museum, Trump declared ominously, “America’s founding built the most fair, equal, and prosperous nation in human history. Yet, as we gather this afternoon, a radical movement is attempting to demolish this treasured and precious inheritance.” By falsely claiming that “the left” is perverting American history, transforming it into a tool of pinko indoctrination — President Trump is politicizing the past.

The President’s announcement at the “White House Conference on American History” is nothing new; ever since a barrage of tweets defending confederate statues in August 2017, Trump has consistently positioned himself as a “culture warrior.” This past summer, Trump signed an Executive Order maximizing the punishment for those charged with defacing memorials or statues, and in September 2020, he attempted to purge racial sensitivity training from the White House on the grounds that it was “teaching people to hate [America].” He even insisted on holding a July 4th address at Mt. Rushmore — amidst the pandemic — delivering a theatrical tirade attacking the “radical left” for “defiling the memory” of the four presidents enshrined in granite behind him.

His argument that historians cast off historical figures as “villains” for their sins, with no consideration of their contributions, is completely inaccurate; modern history is not so black and white; it does not denounce or glorify historical figures by placing them into boxes labeled “good” or “evil.”  In the case of the Founding Fathers, people invested in American history study their conflicting legacies — tackling the disparity between the aspirational ideals that the Founders preached, and the reality of both their complicity in, and enabling of slavery.

Two years ago at Bronx Science, Dr. Abrams, an English teacher, and Dr. Davis, a History teacher, designed Advanced Placement American Studies, a course that gives students the opportunity to delve into the intricacies of America’s past. The complex legacies of the founding fathers, Thomas Jefferson in particular, is one of the many topics that students grapple with over the course of the academic year.

“I think it is important for students to get comfortable with complexity,” Dr. Davis explained. “Entertaining a 360 degree view of historical figures moves students away from simple approbation and condemnation and encourages them to consider people with more understanding.” By having lessons on both the Declaration of Independence and Sally Hemings, students are forced to reconcile their simultaneous existence.

The critical thinking that a comprehensive American history education demands from its students prepares them to be engaged members of the public sphere as adults. Dr. Davis encourages vibrant debate around controversial topics like Jefferson’s legacy, because “when students maintain that habit of mind during their daily lives, I think it makes them more willing to interact fruitfully with people with whom they disagree about important topics,” he said.

“In a pluralistic society like the United States, a tendency to avoid snap judgments and to consider the position of other people is especially valuable. Entertaining complexity allows for the existence of a more deliberative and harmonious democratic government,” Davis added.

President Trump’s wish to present a clean-cut, glorified, monolithic version of American history demonstrates his underlying desire to strip young people of the tools that they will need in order to be active citizens of American democracy. Immediately before introducing the “1776 Comission” to his audience, Trump explicitly made the connection between comprehensive history education and protest, stating that “the left-wing rioting and mayhem are the direct result of decades of left-wing indoctrination in our schools.”

Beneath the sensationalist rhetoric, Trump understands that democracy descends into darkness when the government silences dissent and hampers education. Jefferson himself founded the country on Republicanism, a system which relies on education to instill students with civic virtue centered around protest, debate, and opposition.

Dr. Abrams points to a quote by Robert M. Hutchins in 1952 in order to give insight into her philosophy: “The civilization which I work and I am sure, every American is working toward, could be called a civilization of the dialogue, where instead of shooting one another when you differ, you reason things out together.”

To foster conversation that empowers students to express their opinions with conviction, Dr. Abrams “cultivates mindfulness about words —their intended and actual effects, and how their implications change based on context.” At various times throughout the year, she poses the thought-provoking question, “Who is an American?”and urges her students to consider the history of the word and its power to create exclusive communities. “People toss around the word ‘American’ casually, but it has a rich, kaleidoscopic history,” Abrams said.

Her goal is not to have students walk away with a clear, clarified concept, but to “leave the course with a fuller understanding of what it might signify in multiple contexts, if not total clarity about a singular definition. While maintaining that historical grounding, I also hope that students keep reading arguments about its meaning as, in Jefferson’s words, ‘new discoveries are made, new truths disclosed.’” By carefully choosing their words and understanding the legacies behind them, students will be able to express their ideas and hold their ground, contributing to a thriving democracy.

The study of American history is meant to highlight the incongruence between our nation’s ideals and its failure to represent those ideals in practice. President Trump’s notion that“patriots” cannot simultaneously understand America as a genocidal enterprise and the nation of American Exceptionalism demonstrates his lack of understanding that American history is as complex as it is contradictory.

The truth is not one understanding without consideration of the other, but rather the interaction of two seemingly incompatible extremes. True “patriots” are not those who choose to ignore the country’s problems, but those who are willing to expose, confront, and strive to fix them.
President Trump’s wish to present a clean-cut, glorified, monolithic version of American history demonstrates his underlying desire to strip young people of the tools that they will need in order to be active citizens of American democracy.