No Help In Sight: The Prospect of a Second COVID-19 Relief Package From Congress

How polarized political negotiations have ruined the chance to get economic relief to millions of struggling Americans. 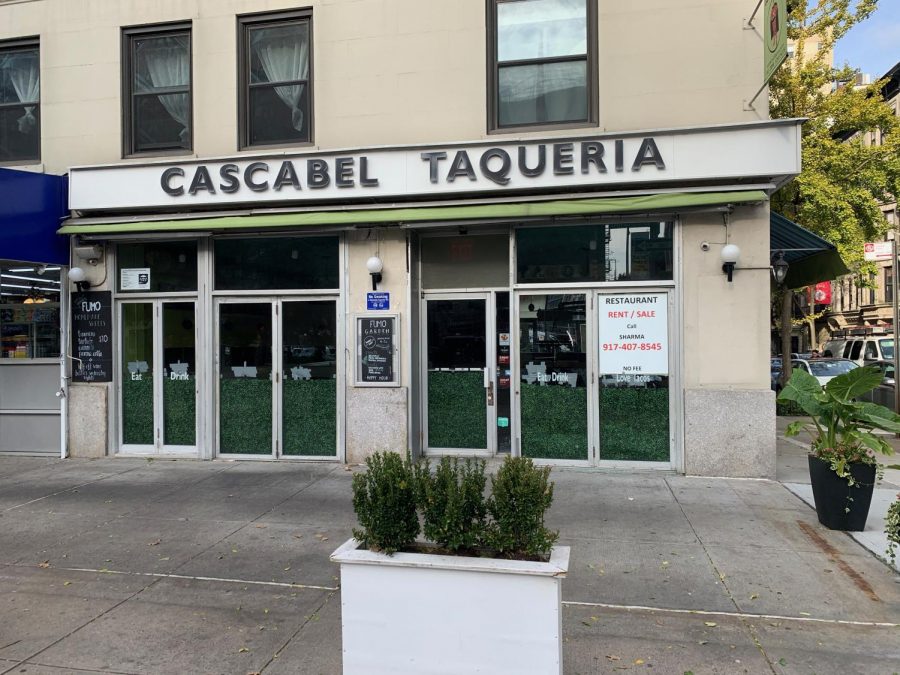 Cascabel Taqueria, a once “funky” and “casual” Upper West Side taqueria, is one of the many New York City small businesses that has been forced to close since March 2020, due to the Coronavirus pandemic. Unfortunately, like many other restaurants across the country, the once neighborhood hotspot has had to put a “Space For Rent,” sign in their window. As temperatures drop during the winter months, and the hopes of a government stimulus package lessens, owners are worried that their restaurants will have to face this same fate, once outdoor dining is no longer a viable option.

New Yorkers and people around the country need assistance from the Federal government, and they need it now.

Unemployment has reached staggering levels within New York City: according to the New York Department of Labor, 13.9% of city residents were unemployed in September 2020. Currently, empty storefronts litter New York City streets, as businesses continue to shut down. More than 2,800 small businesses have closed in the city since the novel Coronavirus pandemic began in February 2020. Because no stimulus bill was passed before Election Day on November 3rd, 2020, the chances of one being passed over the next few months is slim. If no stimulus is passed soon, economists are warning of irreparable economic damages that will take years from which to fully recover.

On March 27, 2020, the Coronavirus Aid, Relief, and Economic Security (CARES) Act was signed by President Trump. This bill was rare proof that lawmakers in D.C. could achieve a bipartisan compromise during a time of crisis, and the bill became a lifeline for millions of Americans and small businesses alike throughout the pandemic.

The CARES Act was effective, keeping an estimated 16 million Americans out of poverty, but almost all of the benefits that were introduced expired on July 31st, 2020. This has left the lives of millions of unemployed people — low income workers, non-essential workers, and small business owners — completely upended, through no fault of their own. It is time for the Federal government to do its job and to make another economic stimulus deal for the good of the American people.

Negotiations regarding this second stimulus bill have been playing out for months, but neither Republicans nor Democrats have wanted to concede anything to the other side. The Democrats, who are led by Speaker of the House Nancy Pelosi, were fighting for a large funding bill, whereas the Republicans, spearheaded by Treasury Secretary Steve Mnuchin, are ideologically opposed to large government expenditures, so they are fighting for a smaller bill. For months, neither side has budged, until finally in October 2020, negotiations began to pick up again.

On October 1st, 2020, Pelosi offered a 2.2 trillion dollar deal with which the Republican negotiators thought that they could work. After a few weeks of deliberation,  Mnuchin finally offered their most generous offer to date, a 1.8 trillion dollar deal. This deal, although far from perfect, would have helped struggling people get by. Unfortunately, Pelosi immediately denied this offer, even though it was quite similar to the one that she had offered earlier in the month.

Many supporters of the Democratic Party believe that Pelosi was purposefully holding out on compromise because she was afraid that agreeing to a deal with the Republicans would have improved President Trump’s chances of reelection on November 3rd, 2o2o. However, many analysts believed that waiting for the election was risky, because now that Trump has lost the election, President Trump no longer has the incentive of pushing for a deal in order to win votes. This sentiment is shared by Co-President of the Bronx Science High School Democrats Club, Amelia Volpe ’21. Volpe said, “I can understand why Pelosi won’t take the deal politically, but in the grand scheme of things, it’s more important to make sure that people can make ends meet, and now that we have waited until after the election, President Trump will probably be less willing to get anything done to help given that he will leave office on January 20th, 2021.”

Given that Joe Biden has won the election, he will not take office until January 20th, 2021, leaving President Trump as a “lame duck” president for the next 70 days. During this period, Trump will have little to no incentive to do anything to help the American people. Even if we get a huge stimulus package passed within the first days of the Biden presidency, it could be too late to save thousands of businesses and jobs in the meantime.

However, Pelosi and other Democratic negotiators are not the only ones holding up negotiations. Senate Republicans, led by Majority Leader Mitch McConnell, are also voicing their displeasure with Mnuchin’s deal, claiming that it is too expensive. This is disheartening, given that even with the unanimous support of Senate Democrats, 13 Republican senators would have to vote “yes” in order for a second Coronavirus stimulus bill to pass. According to The Washington Post, one GOP Senate aide even said, “There are not 13 votes for this pile of [garbage] Mnuchin is capitulating on.” This means even if Pelosi and Mnuchin reach a deal, it will most likely get shot down in the Senate by GOP opposition.

These futile stimulus negotiations are a clear example of one of the biggest problems in modern American politics, that of polarization. Since the election of Donald Trump in 2016, our two parties have become extremely divided, to the detriment of the American people.  We can see this when studying the negotiations through the radical divide in the positions of both parties, and the unwillingness of either party to attempt to make a compromise,. even when the constituents that they claim to represent are in desperate need of help. Lawmakers need to do their jobs and get a second Coronavirus stimulus deal passed, but instead they continue to sit on the sidelines while their constituents struggle.

72% of Americans approve of a $2 trillion stimulus package, according to a recent New York Times / Siena College Poll. This is an overwhelming majority, the likes of which we rarely see anymore in today’s polarized political landscape. This number speaks to how much people are hurting. For many of them, their only chance of relief is through a stimulus package passed by the Federal government. Unfortunately, the American people have trusted their so called “public” servants to serve them, and yet again they have failed miserably.
Lawmakers needed to do their jobs and get a deal done, but instead they continued to sit on the sidelines while their constituents struggle.