The Problem With President Trump’s Promulgation of Conspiracy Theories

The walls are closing in on President Trump’s re-election chances, so he has resorted to starting baseless conspiracy theories. 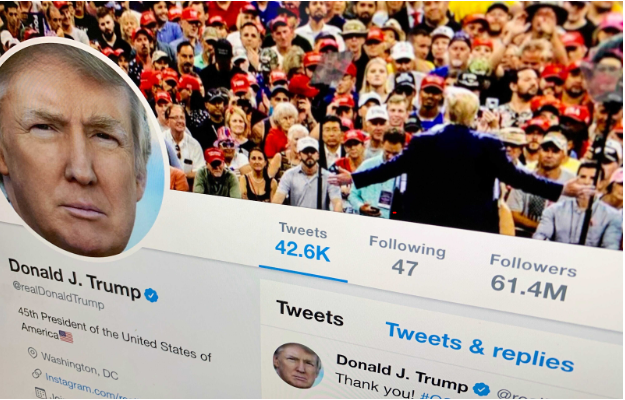 Recently, I decided to tune into the madness that is President Trump’s official twitter feed and expected nothing less than the usual controversial statement. However, I was surprised to see that President Donald Trump has made a very notable change in his usual rhetoric, by deciding to promote hurtful and unproven conspiracy theories. The most prominent of these has definitely been the absurd Obamagate conspiracy. It would seem as though in light of recent events, President Trump has resorted to grasping at straws.

Simplified, the claim of the Obamagate conspiracy is that former President Barack Obama worked tirelessly to damage the presidency of his incumbent: Donald Trump. According to Reuters, the conspiracy alleges that Obama’s law enforcement actions towards the end of his presidency were solely intended to hurt Trump. It also states that former FBI director Jim Comey was loyal to Obama, and, in turn, withheld information from President Trump that would have made his transition smoother.

Trump recently called Obamagate, “The biggest political crime in American history, by far!” on Twitter, but when specifically asked by The Washington Post what Obamagate was referring to, President Trump could not give a direct answer. Instead, he responded, “You know what the crime is. The crime is very obvious to everybody. All you’ve got to do is read the newspapers, except yours.” In this statement, the president not only managed to dodge a question but also discredited its source, The Washington Post. All I will say is that it is very telling when the individual pushing such a controversial conspiracy theory has no clue what that conspiracy even entails.

Trump’s recent poll numbers are probably getting him concerned about his re-election chances and just might explain this radical change in rhetoric. In recent a poll by The Hill, Vice President Joe Biden was shown to have an eleven-point lead over Donald Trump nationally. Because of this recent poll and many others in Biden’s favor, Presdient Trump has had no issue promoting any conspiracy theory that could help him politically, no matter how outrageous or harmful.

This strategy does not seem to be working as well as he may have hoped, as many people are beginning to take a stand against the President and his lies. The many conspiracy theories that Trump has been spreading recently seem to have finally crossed the line of absurdity and are too outrageous to defend. Even President Trump’s usual staunch defenders have shied away from supporting these recent conspiracies.

President Trump does not adhere to logic or reason. He pushes any conspiracy that is politically convenient to him, no matter the consequences on other people’s lives. A perfect example of this is the latest theory that the President has brought back, about T.V. anchor Joe Scarborough. The conspiracy theory claims that renowned MSNBC anchor and former congressman Joe Scarborough was somehow involved in the tragic death of his former congressional staffer, Lori Klausutis. Klausutis, who tragically died of a head injury in 2001, used to work in the congressional office of Joe Scarborough.

President Trump faced universal backlash across party lines for his push of this conspiracy theory, which had been proven to be untrue years earlier. Utah Senator Mitt Romney was particularly troubled by the theory’s resurgence and blasted the president for his revival of the nearly twenty-year-old conspiracy. Romney took to twitter and called Trump’s actions “Vile” and “Baseless,” saying, “Enough already,” in response to President Trump’s pushing of numerous baseless conspiracies. Romney also brought up something troubling, pointing out how Lori’s widow, T.J. Klausutis, has had to relive the tragedy of his wife’s death once again due to Trump’s push of the conspiracy. Romney tweeted, “I know Joe Scarborough. Joe is a friend of mine. I don’t know T.J. Klausutis. Joe can weather vile, baseless accusations but T.J.? His heart is breaking.” Romney’s comments truly exposed Trump’s lack of regard for anyone but himself.

In response to Romney, Trump tweeted, “The opening of a Cold Case against Psycho Joe Scarborough was not a Donald Trump original thought, this has been going on for years, long before I joined the chorus. In 2016 when Joe & his wacky future ex-wife, Mika, would endlessly interview me, I would always be thinking….”. This tweet reveals once again how President Trump continues to push these baseless conspiracy theories, even after intense backlash ensues.

The simple truth is that Joe Scarborough had nothing to do with the accidental death of his former staffer, and there is no Obamagate. Trump’s conspiracy theories are untrue, and can easily be proven false. Scarborough was in Washington when the accident occurred, and that is a proven fact. It is shameful for the President of the United States to be bringing back a twenty-year-old conspiracy simply for political gain. His push of these conspiracies has hurt so many people, such as T.J. Klausutis, who has been coping with the death of his wife for decades.

In response to Trump’s tweet, T.J. Klausutis wrote a letter to Twitter CEO Jack Dorsey, asking him to remove Trump’s hurtful tweet from Twitter. Twitter gave their condolences to Klausutis but stated that they could not remove his tweet due to their policy of free speech. One particularly heartbreaking part of his letter read, “There has been a constant barrage of falsehoods, half-truths, innuendo and conspiracy theories since the day she died … Because of this, I have struggled to move forward with my life.” It is apparent that Klausutis is obviously hurting from this letter. Not only did he have to weather his wife’s premature death, but he has now been put through the same pain again due to the actions of the President of the United States. This aftermath just reveals once again how President Trump has no empathy for others and does not care who the conspiracies he peddles may hurt.

Although Twitter was unable to remove President Trump’s problematic tweet, it is still taking action against Trump in response to the Joe Scarborough conspiracy. Twitter announced that it would begin applying a fact-check filter onto the tweets of the President. This is a revolutionary step and is the largest step taken so far in curbing the president’s daily promulgation of lies and misinformation. In response to this, President Trump immediately threatened legal action against Twitter and other social media sites.

The president is scared. Twitter is the only tool he has left, and the walls are closing in.
The simple truth is that Joe Scarborough had nothing to do with the accidental death of his former staffer, and there is no Obamagate. Trump’s conspiracy theories are untrue, and can easily be proven false.