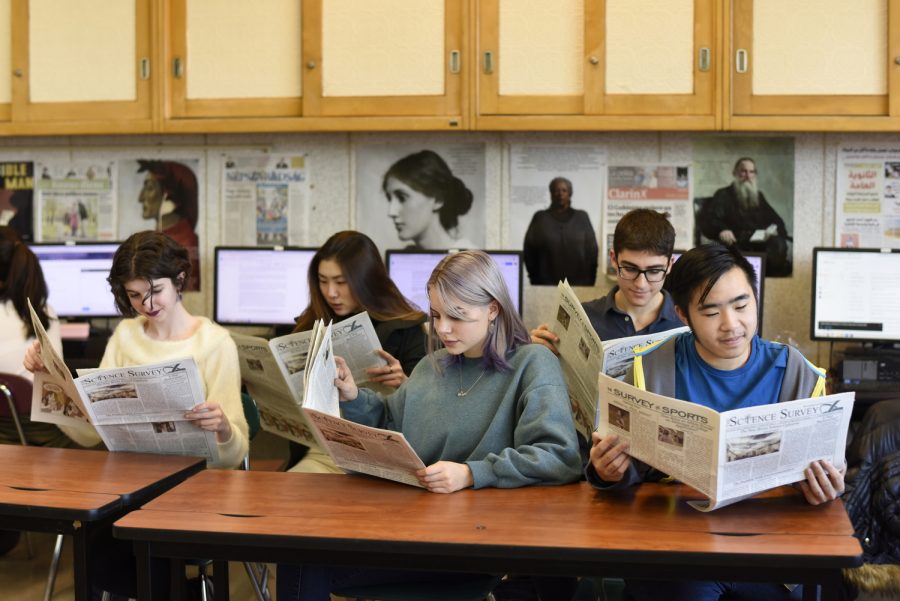 The importance of freedom of the press in a democracy cannot be emphasized enough, as the students in Bronx Science's Journalism class know well. Here, the editors of 'The Science Survey' newspaper proof the latest issue of the print edition.

A free press is the lifeblood of a healthy democracy. But in the past decade, the global political climate has seen a growing trend towards authoritarianism, with more than a third of the world’s population living in a backsliding democracy. As people’s civil liberties are stripped away, and corruption abounds, journalists — especially ones who report on those sensitive issues — have increasingly come under fire. In 2019 alone, the International Federation of Journalists reported that 49 journalists were killed, 389 were jailed, and 57 were held hostage.

With Donald Trump’s election in 2016, America’s position as one of the last bastions of the free press began to crumble. His visceral, passionate, and incessant attacks on the free press took hold of the country, and echoed around the globe. It is becoming more and more clear that his rhetoric has served as a tacit endorsement of violence against journalists — when Trump jokes about killing journalists, the world listens. And since 2016, press freedom in the United States and the world has rapidly deteriorated.

Trump’s sycophantic relationships with tyrannical world leaders have further exacerbated this trend. He has joked with President Putin of Russia about “getting rid of journalists,” laughed when President Duterte of the Philippines called journalists “spies,” and, most famously, sided with Prince Mohammed Bin Salman after Saudi Arabia’s targeted killing of the Washington Post journalist Jamal Khashoggi.

President Trump and Israeli Prime Minister Benjamin Netanyahu in particular have consistently aligned themselves with one another, and they share a concerning affinity for undermining independent journalism. In fact, the press freedom watchdog “Freedom House” compared Netanyahu’s hatred of the media to Trump’s, and expressed concern about declining — and perhaps intertwined — press freedoms in both Israel and the United States. This relationship is particularly relevant now, as Trump unveils his “Middle East Peace Plan,” and tensions in the region mount.

The West Bank and other Israeli occupied Palestinian territories boast some of the highest rates of violence against journalists in the world. Israel, under the leadership of Benjamin Netanyahu, has bombed some Palestinian media outlets reporting in the West Bank, after falsely labeling them as terrorist organizations. Reporters Without Borders reports that although that the Israeli military is the main aggressor, the Palestinian Authority is also responsible for a significant portion of the violence as well.

The policy proposal (the brainchild of President Trump’s son-in-law, Jared Kushner) failed to even bring Palestinian voices to the negotiating table, and capitulated to nearly ever Israeli demand. Experts fear that it will give the Israeli government undue power, and potentially increase violence in the region.

This violence will most likely fall heavily on journalists, due to their roles as witnesses to the human rights violations and atrocities perpetrated by both the Israeli and Palestinian governments.

If these journalists are put in danger, then they will be yet another casualty in Trump’s war against the most fundamental parts of democracy — both at home and abroad. They deserve better. The world deserves better. Make no mistake. The Trump administration’s Middle East peace plan threatens the very idea of a free press in the West Bank.
With Donald Trump’s election in 2016, America’s position as one of the last bastions of the free press began to crumble.