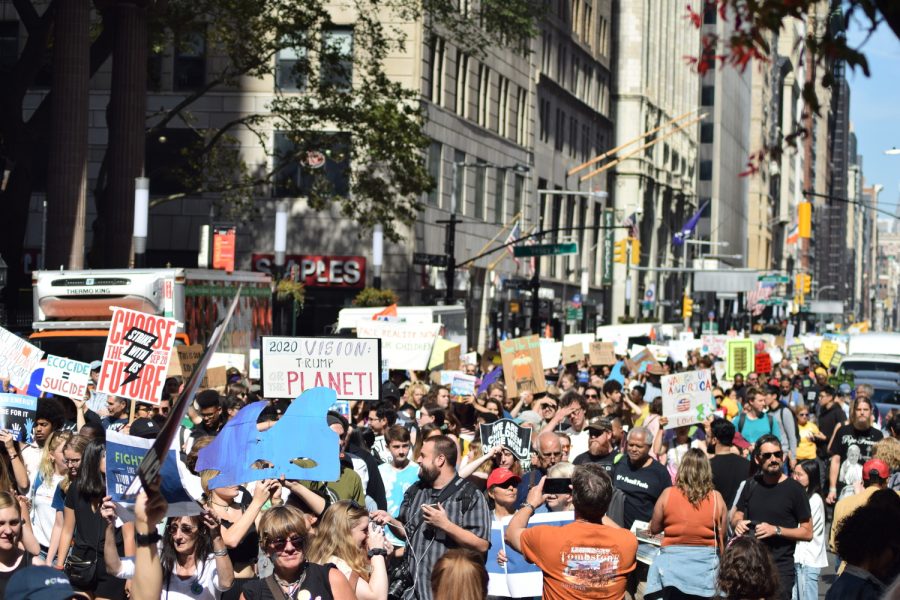 Students marched for Climate Change in New York City on September 20, 2020. We must similarly re-imagine the world in the wake of the Coronavirus pandemic.

The tension between tradition and progress has always been an integral part of the American story. There have always been those with their feet firmly planted in the status quo, clinging to the familiar, afraid to step into the unknown. It is not easy to tear ourselves away from how things have always been done — we have to be bold. However, as COVID-19 makes its way across the globe, we may have no other choice but to be bold.

In the past few years, many politicians — from Alexandria Ocasio Cortez to Ilhan Omar to Bernie Sanders — have gained prominence by challenging some of the most fundamental systems in America. They have asked why things like housing, jobs, and the Internet could not be universally available. They have made the ‘radical’ assertion that poverty should not be a barrier to a college degree, or to receiving life-saving medical care, and have even argued that perhaps poverty does not need to exist at all. They have spoken to some of the most desperate hopes and pains of many Americans, and in doing so, created a space for millions of people across the country to dare to dream of something better.

But things change slowly, and despite the electoral victories of the progressive movement, they did not quite have the political traction necessary to enact any meaningful legislation, leaving underserved communities across the country vulnerable. Mere months after the Federal Reserve reported that an astonishing 40% of Americans do not have $400 in the bank for emergency expenses (a number that has been on the rise since 2013 when the survey began), the novel Coronavirus began to devastate the country. More than 38.6 million people (and climbing) are out of work, and millions more ‘essential workers’ are forced to work, despite the risk of contracting COVID-19. Even as the stock market soars, many economists solemnly predict that the economy may never be the same.

The pandemic has traced the contours of our society, and it has thrown its cracks and fissures into sharp relief. As blue collar workers are forced to brave eight hour work shifts, often without masks, the government’s failure to protect working people grows abundantly clear. As prisons become epicenters of the virus, with dozens of inmates dying every day, the immense dangers of mass incarceration become evident. As domestic violence rates soar, the inability of the criminal justice system to adequately aid and protect survivors of domestic violence is painfully apparent. And as article after article is published about how to conquer boredom during quarantine, and celebrities console us from their mansions, the fact that working from home is a privilege has become nearly indisputable.

Many progressives see these tragedies as somber endorsements of the world they envision. They believe that we occupy a critical moment in American history — one that calls for immediate and transformational action. And that belief is spreading. Workers all across the country have organized strikes and “sickouts,” demanding paid sick leave and better working conditions. Support for ‘Medicare for All’ surged to an all time high in a poll released in early April 2020. Members of Congress across the political spectrum passed legislation giving millions of Americans (deeply inadequate) paid sick leave, and socializing Coronavirus testing and care. Groups like the Democratic Socialists of America have even reported spikes in membership since the pandemic began. Although the crisis has largely impaired traditional grassroots organizing efforts for 2020, progressive action groups all across the country have begun to find new ways to organize.