The Science Survey • May 14, 2020 • https://thesciencesurvey.com/editorial/2020/05/14/trumps-coronavirus-briefings-his-newest-reality-show/

In America’s time of need, President Trump has been using his Coronavirus briefings to spread misinformation and to push his agenda. 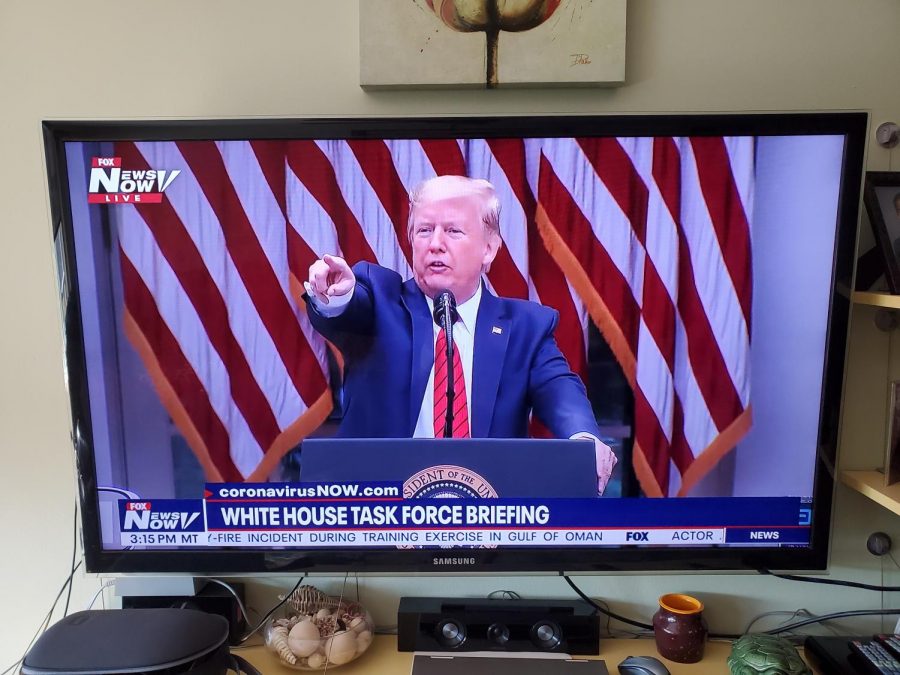 President Trump points to a reporter during one of his Coronavirus press briefings.

Have you watched television lately? If so, you have probably seen Trump’s newest reality show! It airs every night from five until he abruptly walks off the stage. Yes, I am talking about the daily White House coronavirus briefings.

In true reality show fashion, the president has chosen to spread wild misinformation and lies, rather than give the public what they really need, guidance. During his coronavirus briefing on April 22, 2020 Trump even suggested, to the utter shock of Dr. Deborah Birx, the White House Coronavirus response coordinator, that they should look into whether injecting disinfectants into the body would have any effect on the virus. This is the president of the United States, the highest individual of authority in the country, who essentially advised the citizens of the United States to ingest chemical bleach.

This is far from the first time that the president has spread misinformation that puts lives at risk. Trump recently pushed the experimental drug hydroxychloroquine as the “miracle cure” for coronavirus without any scientific proof. Recently a formal study was conducted, showing the drug has little to no effect on the virus, and can actually be extremely harmful to humans. In fact, many patients in the study who took the drug passed away from complications. Trump pushed this dangerous drug as the “magic” cure, and in the end, it turned out to be lethal.

The ongoing pattern here is that the president of the United States cannot be trusted to deliver the public reliable and factual information. Despite having an extremely talented staff who want the best for the American public, the president still manages to spread false and harmful medical information. This could seemingly be prevented if the reality star took a step back from the podium and allowed the many “talented people” in his task force to run the briefings. Sofia Maharias ’20 agrees, saying that “the professionals on the task force like epidemiologists should be the ones conducting the briefings…otherwise, it gives Trump ample opportunity to discuss matters that are far less significant than the actual virus.” I completely agree with her, as it seems like a logical way for the president to deliver accurate information to the public, if only that was his true intention.

Now that we have established that the president’s motives behind his briefings are not for the good of the American public, we can further investigate his true intentions. It is apparent that in lieu of his usual politically charged rallies, Trump has been using the daily coronavirus briefings to aid in his re-election. Although not as unhinged as his normal rallies, Trump has still managed to interject his usual catchphrases into the coronavirus briefings. Recently, he has gone on tangents about Michael Flynn being “treated very unfairly,” the progress of the U.S. Mexico border wall, and most frequently, the actions of the “do-nothing” democrats. All topics which are wildly unrelated to the topic at hand. He even showed a propaganda video one day, in an attempt to rewrite the history of his inaction during the months of January and February 2020.

Trump makes sure to include these irrelevant topics and false information in almost every one of his briefings but fails to address the difficult topics, most glaringly the growing coronavirus death rate. This piece of information has not been mentioned in a single coronavirus briefing by the president, even though it is the most vital information for Americans to know. Maybe Trump thinks that if he does not acknowledge the deaths, people will just forget that over 85,000 Americans have lost their lives to the virus (as of the writing of this editorial). Whatever the reason, not addressing the deaths altogether is shameful and wrong.

Sadly, after his statement about ingesting disinfectants aired, Trump’s newest reality show was abruptly canceled. Having been postponed indefinitely, it has not been renewed for a second season. It can, however, now be added to Trump’s growing list of failed endeavors.
The ongoing pattern here is that the president of the United States cannot be trusted to deliver the public reliable and factual information.