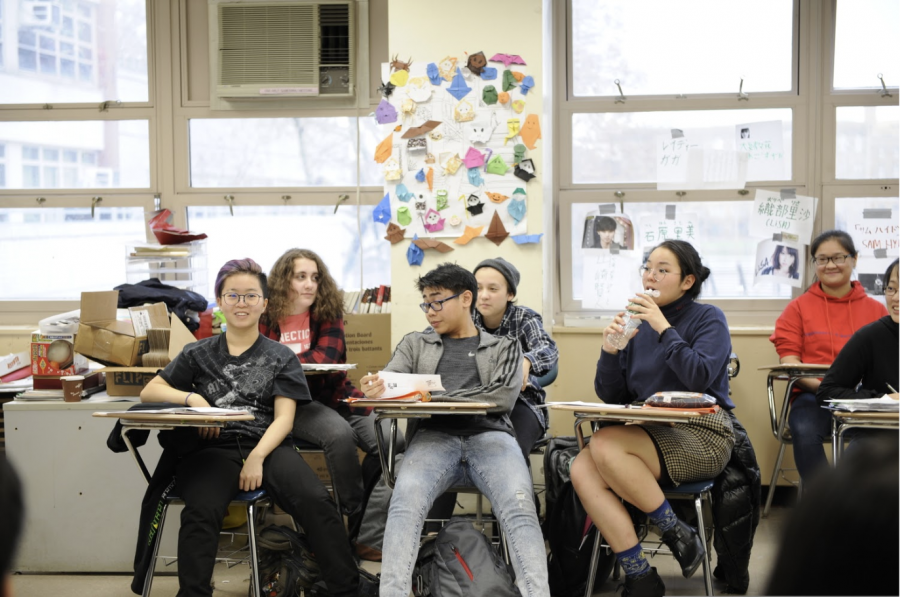 In 2011, the New York State Department of Education (DOE) stopped requiring Regents examinations in languages other than English (LOTE), replacing them with locally-designed proficiency assessments. Though Bronx Science still has ‘World Languages Regents,’ the tests students take are actually not state-wide assessments, but rather exams created by local education authorities. The change was implemented to cut an estimated $700,000 from the NYS DOE’s budget, according to The New York Times.

Many teachers have questioned why World Languages in particular were targeted for downsizing, and wondered what the long term effects of the abandonment of the World Languages Regents have been. Several people who are closely involved have commented including Marie Campanaro, Co-chair of the New York State Association of Foreign Language Teachers’ (NYSAFLT) Public Advocacy Committee, who has worked as a teacher for thirty years, as well as Ms. Rocchio, the Assistant Principal of the World Languages Department at Bronx Science.

According to Campanaro, the discontinuation of the LOTE Regents has not been the only effect of budget cuts. Restrictions on spending have also limited DOE funding for the teaching of world languages. “World Language programs were cut, World Language teachers lost their jobs, and entire grade levels were no longer receiving World Language instruction,” said Campanaro. Certain World Languages in particular have fallen victim to these cuts. Campanaro notes that an “elimination of languages offered, especially French, German, Latin and Italian, occurred across the state.”

NYSATFL finds that the abandonment of the Regents has affected not only the range but also the quality of the programs offered to students. “The loss of the state assessments resulted in a wide variety of locally-developed assessments, with varying degrees of rigor. School districts across the state now differ in the level of rigor of their language programs and assessments,” explained Campanaro. This patchwork of tests clearly creates issues of equity and fairness. “Without a common assessment there is no way to oversee the compliance to our standards from district to district,” Campanaro stated.  It has also led to a mismatch in some districts between the teaching in schools and the tests the students take. “Many frustrated World Language teachers across the state contacted us at the NYS Association of Foreign Language Teachers to report that their districts were no longer in compliance with State Education Department regulations regarding their World Language programs,” she reported.

This thought was echoed by Bronx Science’s Assistant Principal of World Languages, Ms. Rocchio, who said that “the LOTE exam reveals that students have trouble with reading comprehension and do well in listening, speaking, and writing. I don’t think the test reflects students’ abilities, as our teaching is more proficiency-based.” When asked how this disparity could potentially be addressed, she said, “One improvement would include the State returning to writing the Regents exams in World Languages.”

Though some might claim that the loss of World Language programs is due to students’ lack of interest rather than budgetary cuts, historical evidence shows otherwise. Campanaro said, “Over the years I have seen spikes of interest in other languages based on world events… However, most existing language programs remained intact, until the elimination of the state assessments. The reduction of languages and loss of language programs that we have experienced is based on state and district actions more than on the lack of student interest or language trends.” In fact, in the past, when more language opportunities were made available, students were eager to learn them.

“I saw a dramatic increase in student enrollment in World Language courses when the Second Language Proficiency Examination was introduced in 1989,” said Campanaro. “This increase continued on to the upper levels. The Checkpoint B state-assessment, the Regents exam, was no longer reserved for a small tract of accelerated students, and students continued to upper levels of language like never before.” Between 1989 and 2011, the number of students taking World Language courses rose, but this trend reversed with the elimination of the Regents. While most students still fulfill the basic level of their school’s language requirement, many choose not to proceed to higher-level language learning, or their school simply does not offer a course in their language of choice beyond the proficiency level. “Unfortunately, there has been a slow decrease in enrollments of upper-level language courses since the elimination of the state exams,” said Campanaro. “This could be due to districts no longer staffing those courses as well as the perceived lower perception of the discipline because of those cuts.”

This claim is borne out by the fact that two years before the elimination of LOTE Regents, several World Language AP exams, including French Literature, German Literature, Latin Literature, and––although it was restored after a protest––Italian Language and Culture, were terminated. The discontinuation of these exams has created inconveniences for high school students who want to pursue language but have no further courses to take by the time they reach their junior or senior year. By the time these students enter college, they may have experienced language attrition or simply lost interest.

Bronx Science has weathered cuts to language programs better than most schools in New York State. High performing students, well-informed teachers, and well-funded programs have enabled us to retain a flourishing language program that offers many opportunities in a wide range of languages. According to Ms. Rocchio, enrollments in World Language programs at Bronx Science have increased 15-20% over the past thirty years, especially since the introduction of AP classes in all available languages. As students’ priorities have changed, so have the school’s. Russian and German, for example, have been eliminated due to lower interest, but Mandarin and Japanese have both grown significantly. Yet despite a broadly healthy picture, Ms. Rocchio notes that there is a 40-50% loss of students between third-year LOTE proficiency classes and the AP, despite the efforts of our great World Language teachers.

Why, even with opportunities available, are students still choosing to opt out of languages? Perhaps it is because a large pool of students choose courses based on what they believe will look best on their transcript. As Ms. Rocchio explained, “Students often choose based upon what they believe colleges want to see, and this often results in students opting out of language in the senior year.” The belief that World Languages are somehow undesirable is not limited to students; as Campanaro also pointed out, “There is definitely a lack of funding for and commitment to World Language education on the part of the state. Sadly, this has always been the case in the U.S. where the value of learning a second language is not appreciated.” Even at the national level, world languages are seen as less important, despite being one of the most practically useful skills for various careers.

Our national failure to grasp this is steeped in a parochial view of our nation, if not the world as a whole, as a place where everyone fundamentally speaks English. This deep-seated attitude not only applies to our academic lives, but also to our interactions with those around us. In an incident from May 2018 that attracted significant media attention, two American citizens were asked to show their IDs and subsequently held for questioning in a Montana convenience store. When they asked why they were being detained, the law enforcement officer responded, “I saw that you guys are speaking Spanish, which is very unheard of up here.”
“Over the years I have seen spikes of interest in other languages based on world events… However, most existing language programs remained intact, until the elimination of the state assessments. The reduction of languages and loss of language programs that we have experienced is based on state and district actions more than on the lack of student interest or language trends,” said Marie Campanaro, Co-chair of the New York State Association of Foreign Language Teachers’ (NYSAFLT) Public Advocacy Committee.