Prince Harry and Meghan Markle to step down as senior members of the royal family. 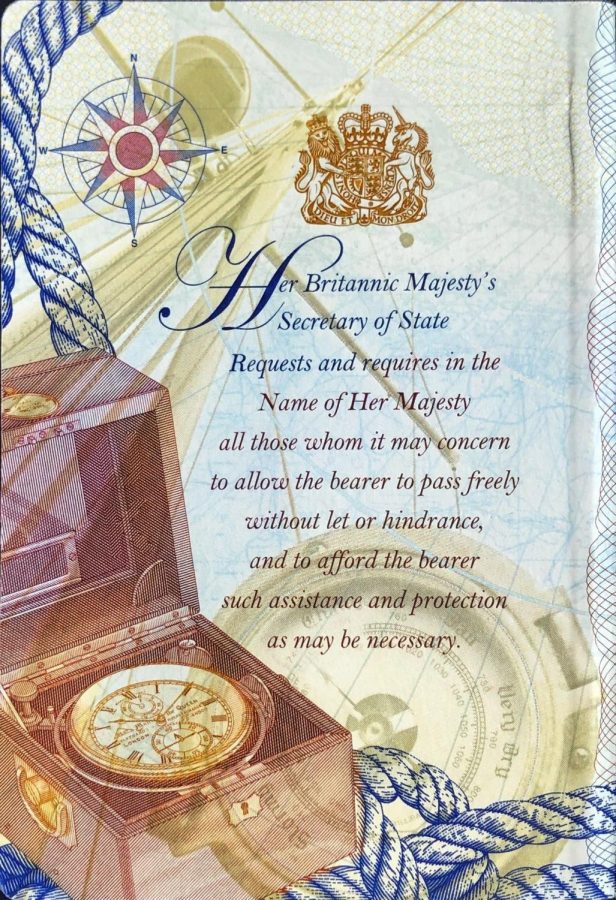 The British passport features many royal symbols and illustrations such as this one on the inside cover.

In early January 2020, Prince Harry and his wife Meghan Markle announced their plans to step back from the royal family and to become financially independent. With news stories covering this announcement appearing all across the globe, the royals were supported, especially by fans across the pond. It makes sense that Americans would feel sympathy for Meghan Markle and Prince Harry after they suddenly announced these plans. The Duke of Sussex has been very clear that the treatment and portrayal of his wife and their privacy as a couple by the media is unacceptable, especially after his mother, Diana, Princess of Wales, faced the same scrutiny before her death in 1997. In a culture full of powerful families who seem to only endure each other for the sake of business, it can be easy for people to identify the royal family as nothing more than purely extravagant titles and customs. In America, the royal family is, as Mr. Colchamiro, Assistant Principal of the Social Studies Department at Bronx Science and I agreed, “…like the Kardashians of England.”

In the United Kingdom, where the monarchy is supported by three-quarters of the British public, this decision is not viewed as favorably. Queen Elizabeth II is the 32nd great-granddaughter of the first King of England, King Alfred, who ascended the throne in the ninth century. The monarchy is an institution, a characteristic of the United Kingdom and its sixteen Commonwealth realms all over the world. Perhaps the weddings, the appearances, and the clothes seem frivolous, but the British royal family is, at its core, a family.

Prince William, second in line to the throne behind his father, Prince Charles, and Prince Harry, his junior by only two years, have grown up together, through their parents’ divorce, their mother’s death, and everything in between. They have managed to form a strong bond and forge independent paths in the family while fulfilling their obligations to the country and the Queen.

They are both well-versed in royal protocol, as are their wives. There is a specific procedure for all members of the royal family if they wish to make an announcement – the Queen must approve the statement first. The Duke and Duchess, who had followed this when announcing their engagement, their wedding date, the Duchess’s pregnancy, the birth and christening of their son, did not follow this same rule in their announcement to step away, taking everyone, especially the Duke and Duchess of Cambridge, the Prince of Wales, the Duke of Edinburgh, and the Queen herself by surprise.

The adoration for the Queen by the people of the United Kingdom is so strong that, when the news broke, many people’s first thought was of the Queen. Not only did this look like a slight to the leader of the Commonwealth and the head of the Church of England, but there was an emotional aspect to it as well, which Mr. Colchamiro described very succinctly: “I feel so sad for grandma.”

This is not an issue of racism, sexism, or anything that some elements of the press have been using to defend the Duchess. Nobody is denying that Meghan Markle has been subjected to everything from unfair criticism to blatant racism since her engagement was announced. Nobody is discounting the amazing work that she has been doing for years; in fact, the engagement seemed to signal a new age, one of growth and strength for the royal family.

Samuel Whaley, ’21, wasn’t sure what to think at first, because  “…I haven’t lived there in years… but I think it’s disrespectful [to] the crown,” which encapsulates the misconception that most people have. It’s not about Meghan and Harry as much as it’s about the ideas of family and loyalty and the lengths to which we’ll go for them. This is a question that the royal family has found itself confronting for decades, most famously with Edward VIII’s abdication in 1936 so that he could marry Wallis Simpson. Ultimately, this is an issue of whether one should prioritize their happiness or duty to others. And Harry and Meghan have made their choice.
The monarchy is an institution, a characteristic of the United Kingdom and its sixteen Commonwealth realms all over the world. Perhaps the weddings, the appearances, and the clothes seem frivolous, but the British royal family is, at its core, a family.