Sinophobia Escalates as the Coronavirus Spreads

The COVID-19 pandemic sheds light on feelings of hostility toward East Asians that have been long harbored by some members of Western communities. 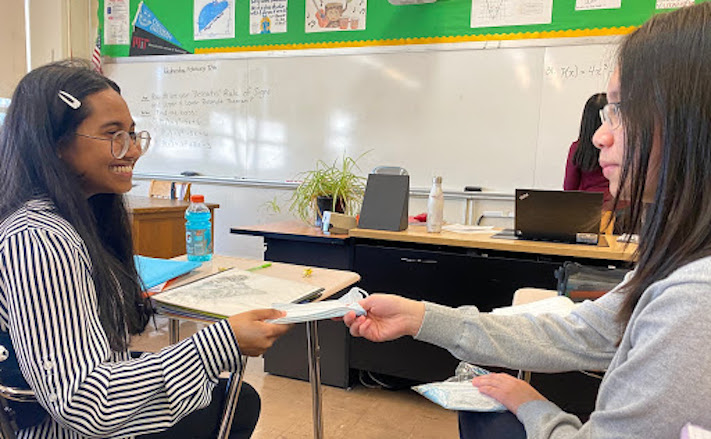 Rachel Koon ’21, right, hands a face mask to her friend, Ummol Fatema ’21, who has a cold. “I really think everyone should do their part to take care of themselves and not endanger others. However, that doesn’t mean we should be fearful of stereotypes and be racist,” said Fatema.

The response to COVID-19 has been anything but uniform. State governments scramble to contain the pandemic as the president who “takes no responsibility” falsely asserts his “complete authority.” While unscientific coronavirus skeptics and trolls continue to tweet about the “Chinese virus,” Governor Cuomo is becoming the media’s new darling with his concrete response and reassuring press conferences.

An ugly disease is rearing its head from the shadows of disruption. It is the wave of sinophobia, or anti-Chinese sentiment, that has fallen upon the Asian and Asian-American community. Those who harbor hostility toward East Asians now use the virus as a scapegoat to vilify them and disparage our cultures. Hostile people evoke long-standing stereotypes against an entire group of people, which are often brushed off and laughed at.

Where does one draw the line between ‘funny’ and ‘racist?’ Too often do internet users make insensitive jokes, gaining likes and laughs at the expense of marginalized groups. On social media platforms like Instagram and TikTok, users joke callously about the deadly virus while ridiculing a vibrant and diverse but unfamiliar culture. Vitriolic attacks on Asian people abound on social media because people can hide behind their profiles and aren’t held accountable for their actions. On Instagram, a post from a user with 6 million followers has attracted thousands of bigoted comments. The video’s caption blames Chinese food culture for the pandemic, which the user jokes should stay “on the other side of the earth.”

When someone has such a large follower base and significant digital influence, spreading bigotry and racist stereotypes is the kind of “influencing” we should condemn. It tells users that it is acceptable to insult other cultures and their people when it is never okay.

Comments often point to the tired stereotype that Chinese people eat everything. This is false. Strictly speaking, only a small percentage consume exotic animals. These comments are not just fictitious—they are racist. Chinese culture is not and cannot be compared to cannibalism.  Drawing upon these stereotypes implies that Chinese people are subhuman savages because of their eating habits, justifying the mounting aggression toward us.

Online dehumanization explains why hate crimes with East Asian targets have spiked in the last few months. Even prestigious institutions like University of California, Berkeley, which have entire departments responsible for public relations, are normalizing sinophobia. The university’s since-deleted Instagram post about “Common Reactions” to the coronavirus outbreak stated that it was “normal” to experience “xenophobia: fears about those who might be from Asia and guilt about those feelings.” Though their intent might not have been sinophobic, it is decidedly not normal to normalize racism based on fears of disease.

Fears and stereotypes also manifest themselves in the form of a subtler kind of racial profiling. Asians have experienced a surge in microaggressions while going about their day-to-day life.

On public transportation, passengers deliberately cover their faces and move away in the presence of Asian people. This behavior stems in part from the rage on social media, but more from an understandable desire to protect oneself from COVID-19. Some use that desire to justify their barefaced sinophobia. This is unacceptable.

“Until Cuomo told New Yorkers to cover their faces, I had stopped wearing masks in public because I feel uncomfortable,” said a student’s mother, a Chinese investment banker. She lives like a standard Upper West Sider. “I don’t want Americans to treat me like a virus just because of something I’m wearing.”