An Epidemic of Anti-Transgender Violence Calls For A System Change 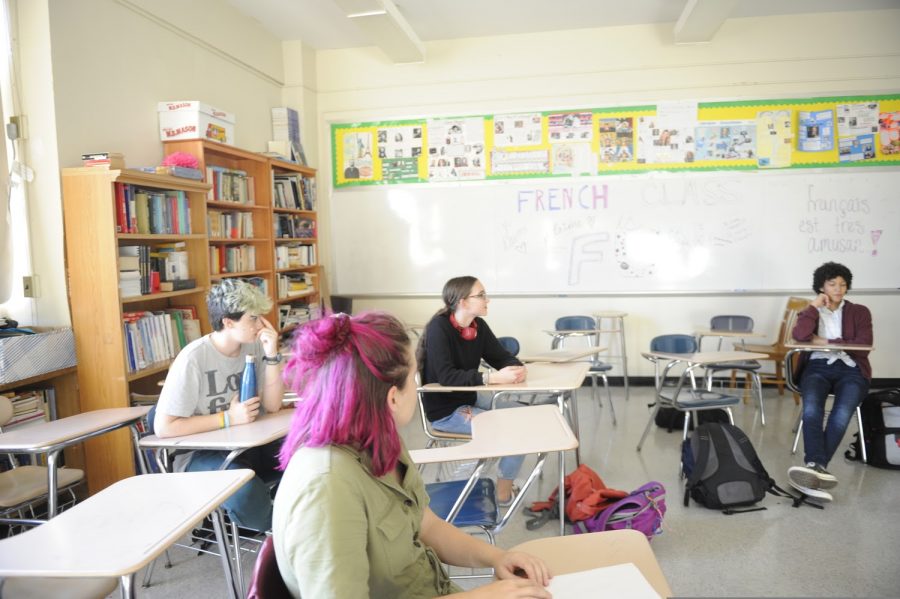 Emilia Lord ’20 participates in a discussion in the Gender Sexuality Alliance club; she believes that everyone—even and especially cis-allies—should actively participate in ending the anti-trans epidemic.

The last reported murder of a trans individual in 2019  was on December 19th. Yahira Nesby, a black trans woman, was gunned down in her apartment in Brooklyn. According to her friends, “every time [Nesby was] around [she] put a smile on my face and others.” An active member of the New York Ball Scene, she was unapologetic about who she was as herself. Unfortunately, the simple act of existing added her to the list of over twenty-five transgender and gender-nonconforming individuals murdered in 2019. Ninety-one percent of them were black trans women.

These numbers, while seemingly abnormally high, are not an anomaly. In 2018, advocates counted 26 murders. In 2017, 23 killings. 2019 marked the fifth year with over twenty trans individuals slain. (And these numbers are only what has been reported and recorded; the number is likely higher. The Human Rights Campaign (HRC) notes that some victims’ deaths may go unreported if bias-motivated incidents are not thoroughly investigated and filed, or if law enforcement, journalists, or family members don’t acknowledge the correct gender identity of the victim.)

The disproportionate violence against transgender people is not coincidental, nor is it idiosyncratic; it is an extension of intentional oppression of the transgender community, a national and global epidemic. And the only way to combat this epidemic is to engage with injustice on every level that anti-trans sentiment infects; there are systemic, institutional, and individual actions that perpetuate and allow for the mass epidemic of trans murder.

Our country’s systems, a microcosm of a global problem, makes it clear that trans individuals are not welcome in any corner, making them especially vulnerable to violence. The HRC foundation’s 2018 report, “Dismantling A Culture Of Violence,”  classifies the increased risk of violence among the transgender community into three intersecting categories: anti-trans stigma, denial of opportunity, and increased risk factors. Stigma, like lack of family acceptance, a hostile political climate, and absence of a representative media culture, can prevent a trans individual from fully participating in society, leading to setbacks in education, no healthcare, and barriers to legal identification that aligns with gender identity. The trans community also often faces unequal policing and an imbalanced justice system. Marginalization and invisibility in mainstream culture leads to increased vulnerability, evidenced by higher rates of sexual and domestic violence, poverty and homelessness, and physical and mental health disparities.

Nearly 1 in 4 transgender individuals report having lived in poverty, 58% report having been mistreated by law enforcement, over 83% of trans youth reported having felt hopeless or worthless in the week prior to the survey. The statistics go on; violence against the trans community is deeply embedded in our culture.

Trans oppression is exacerbated by sexism and racism. The anti-trans epidemic disproportionately impacts trans women of color, who comprise approximately 80% of all anti-transgender homicides, and 91% of anti-transgender homicides in 2019. Also, “people of color face discrimination from the police, who are supposed to prevent hate crimes, but can be the perpetrators of discrimination themselves, like the 2015 murder of Mya Hall, a black trans woman shot by police,” said Emilia Lord ’20, a member of Bronx Science’s GSA leadership team.

Because of these disparities, transgender activist Raquel Willis believes, as written in her article for Essence Magazine, that, to deconstruct our oppressive culture, “we can start with acknowledging that no one knows how to solve this epidemic of violence better than Black trans women. We live with this threat every day and for decades we have been carving out our own methods of survival.” She continues, “Black trans women deserve to exist. We deserve to heal. And our leadership must be prioritized if we are ever going to be completely liberated from the shackles of ignorance and hate that society has placed on us.”

We need systemic and individual change. Government protections, like the Equality Act (H.R. 5) passed by the House of Representatives in March 2019 but waiting for Senate approval, may reform the political consciousness surrounding the trans community. If passed, it would amend the Civil Rights Act of 1964 to apply to all queer individuals, especially within the workplace. There is little hope for it to pass in the Senate with a conservative majority, but sweeping legislation like this could begin the change needed.

But we also need a complete overhaul of cultural consciousness. We need to, in the words of the Human Rights Campaign, “dismantle our culture of violence,” by addressing the fundamental root causes of the oppression. Cisgender allies can do a lot to help. “I think the easiest way for a cisgender person to be an ally to trans people is to stick up for them in everyday conversations. If someone makes a disrespectful joke, uses an outdated slur, or doesn’t respect someone’s name or pronouns, call them out on it,” said Lord. “Unfortunately, not many people are aware of the extent of the shocking discrimination and violence that trans people face, and an informed ally can do a lot to change the viewpoints of their friends and family.” Uplifting forefront voices that are often marginalized and educating those less informed are a way to start deconstructing anti-trans narratives that permeate our culture.

Over the course of writing this piece, the list of murders increased from 21 to over 25 measured since the beginning of 2019. The epidemic will not wane on its own; we need to actively dismantle cultural oppression of trans individuals on every scale.

The disproportionate violence against transgender people is not coincidental, nor is it idiosyncratic; it is an extension of intentional oppression of the transgender community, a national and global epidemic.