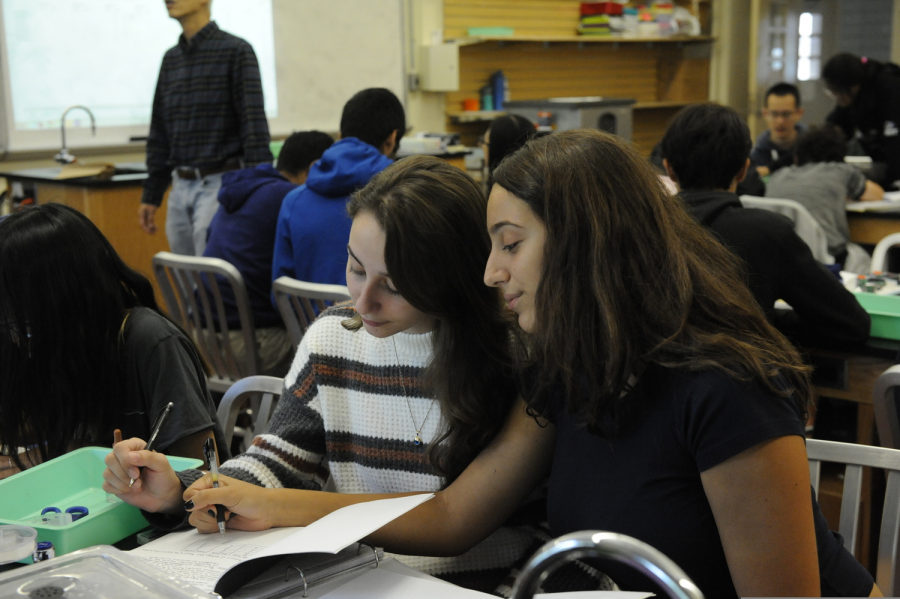 Gesilda Noka ’20 and Amelia Volpe ’21 log their data taken, during an AP Biology class lab. The labs for the class are more advanced than the Regents level class, as the AP exam requires students to have a deep knowledge of the scientific method.

The deadline for AP exam registration used to be mid-March, but as of this year, the sign-up deadline has been moved to the end of September. According to the College Board’s website, a pilot of the early sign-up program last year revealed that more low-income students would take the exams and that students would be motivated to study earlier with this policy. The College Board also added new study resources such as the free, online “AP Classroom” program which will further help students study for the tests and perform better. The goal is to make AP exams more accessible to low-income students.

In spite of this positive data provided by the College Board, students were not pleased to hear about the change. “The new policy definitely does not give students enough time to figure out if they’re going to be ready,” said Mica Nimkarn ’20. For seniors starting the college application process, these early sign-ups can come at a steep cost. “Because I don’t know which college I’m going to, I’m potentially wasting $400 on exams that won’t matter if the college to which I’m accepted does not give college credit or advanced standing for top scores on AP exams,” Nimkarn said.

Even for sophomores and juniors who have not taken APs before, the early sign-ups were a surprise. “I was expecting it later on. If you don’t sign up on time, you can’t take them anymore,” said Omar Darwish ’22. Though Darwish, an underclassman, was planning to take his AP exams regardless of the sign-up date, he believes that “as a senior, it would definitely matter.”

But due to the College Board’s virtual monopoly on standardized tests, students have little choice when it comes to their testing options. “The College Board 100% has a monopoly on standardized tests. Who else offers them?” said Johanna Seppala ’20. While it is true that many colleges are no longer requiring standardized exams as a way of combating this problem, nearly all highly selective institutions “strongly recommend” SAT Subject Tests and almost all require either the SAT or the ACT. And while the SAT is interchangeable with the ACT, APs and SAT Subject Tests are both exclusively College Board exams. This means that almost everybody looking to get into a selective college or university will take several College Board exams over the course of their high school career.

According to the Bronx Science school profile, 91% of students take AP classes, and most students take the corresponding exams. And while most colleges want to see that students have taken AP classes rather than the exams themselves, scoring highly on AP exams can gain students college credits that allow them to place out of classes and save money at most colleges. Furthermore, the fees for the exams can add up to hundreds and even thousands of dollars per student. For starters, the AP cancellation fee went up from $15 in previous years to $40, even with a fee waiver, as per the new early registration policy.

While the costs of writing new tests each year, offering training modules to teach educators how to present the material, writing the nationwide AP curriculum, and grading the exams absorb the majority of the revenue, the College Board still made enough profit for nineteen of its executives to make $300,000 while the CEO made $1.3 million in 2012. This violation of nonprofit status gained the attention of consumer rights organization Americans for Educational Testing Reform. And though the CEO was replaced in 2012, the new CEO, David Coleman, still makes upwards of $700,000 per year.