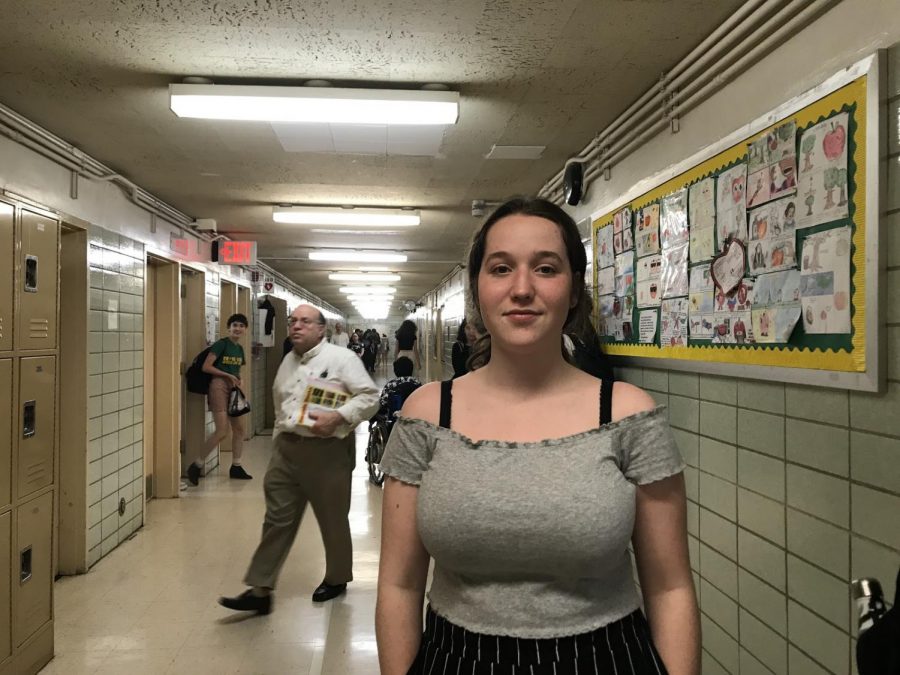 Sarah Mack ’19 advocates for better treatment of animals, saying, ““I don’t think eating meat is bad, but the way we raise animals for consumption is inhumane. I don’t want to contribute to that.”

High meat consumption is a large problem in the United States. The average American consumed about 222 pounds of meat in 2018 (Quartz), four times as much meat as the world average (World Resources Institute). However, there’s no excuse for why we consume so much meat when following a vegetarian diet has immensely more benefits.

Most of our livestock comes from concentrated animal feeding operations (CAFOs), or factory farms, which are animal feeding operation (AFO) sites that host more than 1000 animal units confined in tight spaces for more than 45 days in a year. The living conditions that these animals are placed in are so dreadful that the animals begin to act out. Chickens begin to peck at each other’s bodies and feathers. Pigs become so bored and stressed from the tight spaces that they begin to bite and inflict wounds on each other. Pregnant sows suffer leg problems and skin lesions. Cows are injected with growth hormones that lead to mastitis, an infection of the same udders from where we get our milk.

CAFOs have become so prevalent that they contribute to an estimated 80% of the growth in the livestock sector (United Nations Food and Agriculture Organization). These unsanitary, cramped spaces spread diseases like wildfire, increasing the usage of antibiotics so much so that more antibiotics are used to raise livestock than to treat human disease. All this antibiotic misuse creates superbugs, viruses that are resistant to antibiotics, which might make antibiotics useless for even minor illnesses in the future.

It’s not just animals and our bodies that suffer the consequences. CAFOs contribute up to 18% of the world’s greenhouse gas emissions, including 9% of carbon dioxide, 40% of methane (25 times as potent as carbon dioxide), and 65% of nitrous oxide (300 times as potent as carbon dioxide) (Worldwatch Institute). They produce more than half the total manure created by the agricultural industry, which is estimated to be 1.1 billion tons (National Conference of State Legislatures) and use 75% of all agricultural land, but only contribute to 37% of the nation’s protein consumption (Worldwatch Institute). Although the meat industry attempts to lower costs through these appalling practices, CAFOs actually reduced property values of surrounding regions by an average total of $2.68 million in Missouri, where CAFO regulations were loosened. That’s an estimated national total of $26 billion lost.

There is more money lost when considering the increased risk in diseases from the horrendous living conditions these animals are placed in. High meat consumption increases risk of heart disease, stroke, cancer, diabetes, and obesity, which cost the government and the economy billions every year. Of course, some diseases are genetically determined, but many are preventable. In fact, the Worldwatch Institute found that “approximately 75% of the new diseases that affected humans from 1999 to 2009 originated in animals or animal products.”

There’s a variety of vegetarian diets one can follow. A lacto-ovo vegetarian does not consume any animal products except eggs and dairy, while the only animal byproduct lacto vegetarians consume is dairy. Some, like Eshaan Modi and Archit Kothari ’19, follow ovo vegetarian diets due to religious beliefs. Modi said, “We’ve been vegetarians our whole lives.” Kothari adds, “We eat dairy, but not eggs.”
The amount of resources that are used to raise meat can be used to feed more people than the meat itself.
Pescatarians consume fish and other seafood but no meat, while vegans do not consume or use any animals or animal byproducts, including seafood, eggs, dairy, and fur. Flexitarians follow a mainly vegetarian diet with occasional animal products, while freegans attempt to minimize their consumption of resources through unconventional practices such as dumpster diving.

Dr. Savaiano, a history teacher who is currently vegan, has more to add. “Not only is follow a plant-based diet a very ethical lifestyle, but it has a much lower carbon footprint and positive effects on your health,” he said. “In fact, many of the different types of flu we get year to year come from animals. We don’t have the same immunity that they do. Consuming little to no meat lowers the risk of getting the flu every year.”

It’s no secret that animal-based food also require more resources to produce than plant-based ones; animals expend some of the energy they get from the plants they consume, thus increasing the amount of resources required the higher the food chain level. The amount of resources required to sustain a lacto-ovo diet, the most common type of vegetarian diet in the U.S., is already significantly less than a meat-based diet. Animal-based food contributed to 75% of agricultural land use in the world and two-thirds of all agricultural greenhouse gas emissions in the U.S. (World Resources Institute).

Red meat, especially, requires an immense amount of resources. In fact, beef, the most prevalent type of red meat in the U.S., requires ten times as much resources as poultry, dairy, and eggs (Smithsonian Magazine). Because many animals require crops for food, an increase in the demand for meat increases the demand for plant-based crops. This raises the prices of plant-based diets as well, which further widens the food gap between the rich and the poor. “The amount of resources that are used to raise meat can be used to feed more people than the meat itself,” Sarah Mack ’19 said. She adds, “I don’t think eating meat is bad, but the way we raise them is inhumane. I don’t want to contribute to that.”

Although animal-based foods raise the prices for crops, plant-based products are still less expensive. A study compared an economical meat-based MyPlate (MP) diet to a plant-based olive oil diet (PBOO) and discovered that MP was $746.46 more expensive than the PBOO diet, even though PBOO had more servings than fruits and vegetables. And contrary to popular belief, one can get enough protein on a vegetarian diet. In fact, animal-based products only contributed to 37% of the world’s total protein consumption in 2009 (World Resources Institute). Grains and vegetables have protein you can consume, along with beans, nuts, lentils, tofu, and chickpeas. This list grows to include eggs and dairy if you follow a lacto-ovo vegetarian diet.

It is scary just how much the meat industry contributes to resource depletion, antibiotic misuse, and human diseases. And let’s not forget about the morals behind it all. Although it is controversial whether consuming animals is just, what is not not up for debate is the living conditions in these CAFOs that animals are placed in. “I didn’t become vegetarian until after one of my college friends told me about factory farms. After researching more, I could no longer justify eating meat,” Mr. Fialkow, a history teacher, said. “Being vegetarian is a good way to be conscious of what we put in our bodies and how our food is produced. The decisions we make about what we eat have a far greater effect beyond just consuming it.”

CAFOs and the meat industry are driven by the profit they get from the high demand of meat, which causes them to treat animals as objects rather than actual living creatures. It is in no way moral for animals to have to endure these appalling living conditions. If any human was subjected to the conditions these animals were placed in, we’d definitely speak out. Remain conscious of every purchase you make and what you’re putting in your body. Animals have just as much of a right to live a happy, healthy life as us, so why are we taking that away?