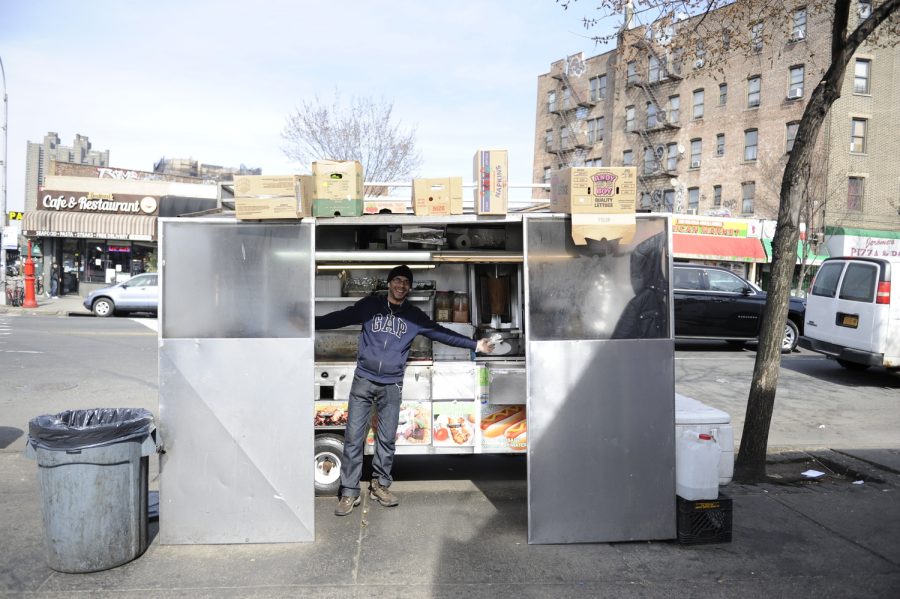 Chef Ali Gamil stands in front of Jerome’s halal cart, which has been at the corner of Bedford Park Boulevard West and Jerome Avenue for the past eight years.

This is the question that Bronx Science students have been debating for years. In this article, I will consider factors such as distance, variety, interaction quality, sauce options, and pricing in an attempt to determine whether Sam’s or Tony’s halal truck reigns supreme.

Tony’s Halal Truck is located on Bedford Park Boulevard and Paul Avenue, a 0.3 mile walk from Bronx Science after school. Mohammed (Tony) Wasifi and Ahmad Mayan, Tony’s nephew, have been serving the Bedford Park educational community for over a decade. They offer the usual halal truck fare, including lamb, chicken, and a combo over rice. They also make falafel, a delicious vegetarian option that Tony recommends.

Tony is a distinctive character. With his iconic facial tattoo and witty humor, he will never fail to chat customers up while they order. “I want the customer to walk away from the truck not just with food, but with a packaged moment that lets them escape, relax and enjoy themselves,” said Tony. His charisma encourages customers to frequently return to the cart for a rice filled reprieve.

Jerome’s halal cart, sometimes referred to as Sam’s halal cart, has been stationed on Bedford Park Boulevard and Jerome Avenue for the past eight years. While ordering from the truck after school, you are likely to be served by Ali Gamil, the cart’s cook. You may also encounter Hesham (Sam) Mustafa, the cart’s owner. Both Ali and Sam are nice people, but they are, admittedly, less outgoing than Tony. Regardless, they have a few surprises under their belt. “We serve Italian sausages, which can be served on a bun or over rice. We also serve potato knishes,” said Sam about his lesser-known items. Sam also has the vegetarian-friendly falafel option, which he sometimes makes from scratch.

Thus far, we have analyzed the macro aspects of the carts. Let us delve deeper by comparing the quintessential halal cart dish: the combo over rice. For starters, both trucks serve the lamb and chicken combo over rice for five dollars. The lamb served at both carts is similar, as they both use premade lamb, cook it on a rotisserie, and grill it. Furthermore, they both offer one free beverage along with each meal, a deal only offered to Bronx Science students.
“I want the customer to walk away from the truck not just with food, but with a packaged moment that lets them escape, relax and enjoy themselves,” said Tony.
Tony’s chicken and lamb is served in a smaller, hyper-minced state. The meats are grilled and served over fine-grain rice, with spicy or mild options. No vegetables are added, but there is a side salad consisting of lettuce. Both carts offer white, barbeque, hot, and honey mustard sauces. Tony’s also has green sauce, a tangy cilantro-lime blend that complements the dish nicely. This limited-edition -sauce appears at Sam’s cart only once in a blue moon.

Sam’s combo over rice consists of larger chunks of meat. Sam’s chicken is always cooked in an aromatic orange sauce. “Everyone has different spices for their marinade, and my spice is a secret,” said Sam. Consequently, the juicy chunks of chicken breast burst with flavor in every bite. Furthermore, Sam’s dishes are often mixed with grilled onions, peppers, cilantro, broccoli, carrots and celery, adding to the robust flavor profile of the dish.

In my opinion, Sam’s halal food is more complex and flavorful. I also cannot deny that Tony is a character, one who is certain to put a smile on your face. Ultimately, this debate depends on how you account for the factors of taste, distance, interaction, price, and variety. So, it is up to you to decide for yourself whose halal cart is best: Tony’s or Sam’s?