The Push We Need to Address Climate Change 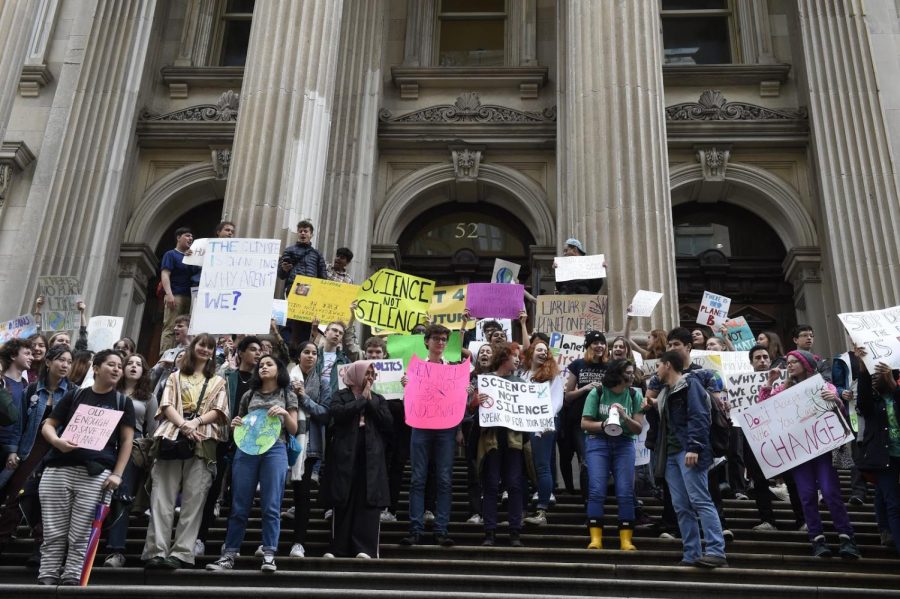 Bronx Science students protest on the steps of City Hall on March 15th, 2019 for the global youth climate strike.

On November 13th, 2018, hundreds of young people from Sunrise Movement, a new youth-led grassroots movement for climate action, occupied House Speaker Nancy Pelosi’s office to demand that the Democratic Party refuse fossil fuel lobbying, introduce climate policy through the Green New Deal, and establish a Green New Deal Committee. Their sit-in was joined by House Representative Alexandria Ocasio-Cortez, who publicized the issue and made it a core part of her political platform. Over fifty protestors were arrested by Capitol Police that day. The powerful wave of student activism shocked the country for many months to come.
But in the end, we are all competing for how best to address climate change as effectively as possible, rather than denying the existence of climate change, and this is not a lone effort for any one person or administration.
In direct response to the young people’s demands, Alexandria Ocasio-Cortez and Senator Ed Markey introduced the Green New Deal bill on February 7th, 2019. You have likely heard of the landmark bill by now, since it has been a subject to widespread praise and criticism in the past few months. In order to accurately evaluate the merits of the bill, it’s important to review the purpose, goal, and content of the bill itself.

The purpose of the Green New Deal is not to impose any policy or action, but rather to seriously consider the demands of youth around the country and to urge Congress to address climate change. It is a non-binding resolution, meaning it doesn’t have the power to enact an actual piece of legislation. It operates similar to the resolutions created by United Nations assemblies, where the resolutions are unable to infringe on any country’s autonomy. In other words, non-binding resolutions like the Green New Deal are “aspirational,” or a “jumpstart” in the right direction, because it alone has no power to change policy. Rather, it can inspire and pressure for change.

This pressure comes amidst many UN scientific reports and declarations, the U.S. Climate Report, global student climate strikes, and overwhelming scientific evidence and media coverage. Even before that, we should have already understood how and why climate change threatens the lives of millions in the United States. That’s why when the idea of a Green New Deal first circulated around the country last year, it received widespread bipartisan support. According to a Yale Climate Communication study of 966 registered American voters in December 2018, for example, 92% of the registered Democrats, 88% of registered Independents, and 64% of registered Republicans supported the Deal.

However, now, these numbers look vastly different. The problem lies in media coverage and the lack of consensus on climate policy. The fear and stigma that are brewed around the name “Green New Deal” deters the country from progressing towards bipartisan climate policy and addressing one of the most important issues of my generation’s lives. The bill is subject to backlash by right-leaning media organizations such as Fox News, many of which deem the Green New Deal as far-left and “socialist.” However, before one labels the Green New Deal as belonging explicitly to one political party or belief, one should think about how important it is to address climate change as soon as possible, regardless of political leaning. One type of criticism targets the particular points within the resolution and offers alternatives, whereas another criticizes the idea of fighting climate change and preventing the impoverishment of marginalized and future populations. The former provides an avenue for constructive criticism to create bipartisan climate policy, whereas the latter is unacceptable and polarizing, and fails to protect the American people from safety, health, and happiness, now and in the future.

In protecting the American people from the climate crisis, our country needs to pass legislation that has the large magnitude of impact needed to curb the worse effects of climate change, as opposed to less aggressive bills that fail to be effective. Many are opposed to Ocasio-Cortez because she is a young, fearless, and high-achieving woman who fights boldly for her progressive values.

But in the end, we are all competing for how best to address climate change as effectively as possible, rather than denying the existence of climate change, and this is not a lone effort for any one person or administration.

Yes, the Green New Deal may set a goal of 100% renewable energy, but it also has a plan for achieving it, such as improving energy efficiency, utilizing scientific research to advance industry, exchange international expertise, and providing resources and training in the energy job sector. The best way to know its content is to read the copy of the bill online; it is only 14 pages long. Most importantly, it is not clouded by oversimplifications by media organizations. Focus on what it has, not what it hasn’t; ask yourself what the significance of such a bill is in our lives, not what is unattainable.