Propelling the Movement Towards Clean Energy 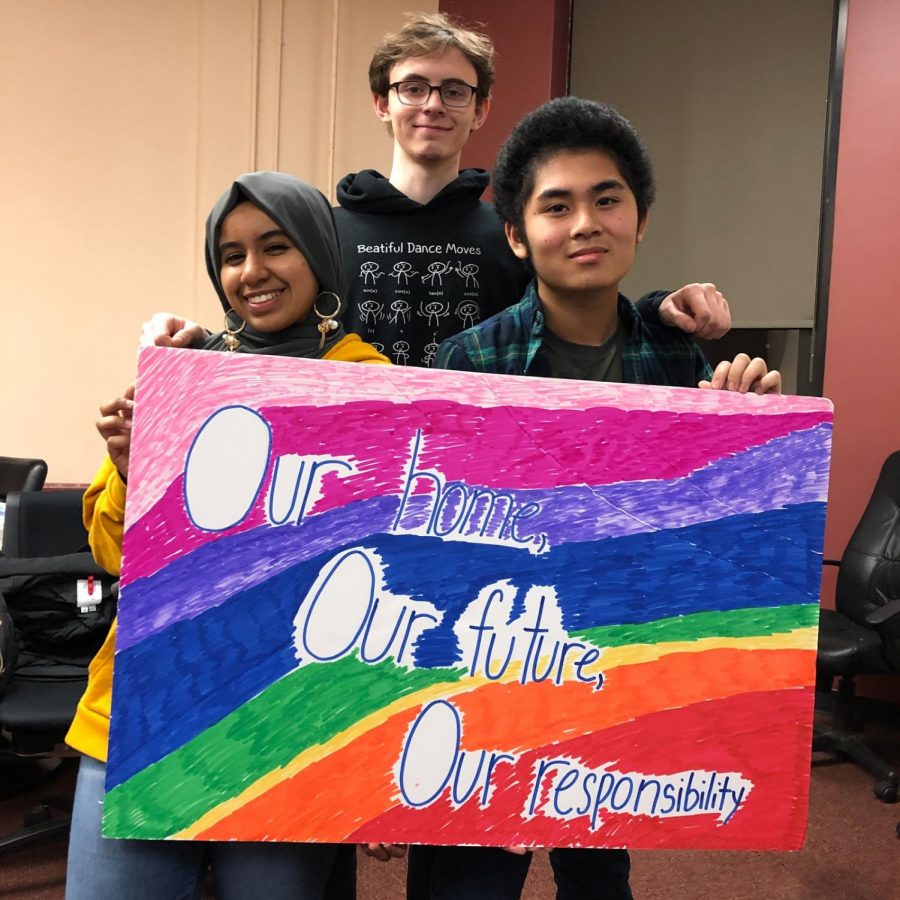 Rajaa Elhassian '19, John Feighery '19, and Peter Alegre '19 pose with a sign that states, "Our home, our future, our responsibility."

Over the past century and a half, coal has enjoyed a lucrative presence in the United States economy. The little black rock, derived from millions of years of dead organic material, has had its fair share of introducing millions of tons of carbon and sulfur dioxide into the atmosphere and solid waste into our soil, causing catastrophic damage to human health and the environment.

Its cultivator and benefactor, the coal industry, continues to pour millions of lobbying money into coal despite the fact that burning coal releases toxic chemicals such as arsenic, lead, and mercury. According to the World Health Organization, coal particles in the air shorten about a million people’s lives per year. Such a blatant health hazard to millions of people across the U.S. should not exist today.

There are practically no benefits to coal. Not only does it pale in contrast to the efficiency of wind power, it is now cheaper to start a new wind farm as opposed to an old coal plant. According to EnergyPoint, a research firm that focuses on energy usage, coal retains a mere 29% of its original energy when accounting for cost of production and environmental damage, while wind power, on the other hand, creates an astounding 1164% of its original energy inputs when converted into electricity. With the introduction of more cost-efficient alternatives such as nuclear, solar, and wind power, there simply is no reason to remain in the coal era.

On December 18, 2018, Washington D.C. lawmakers voted unanimously to introduce The Clean Energy D.C. Omnibus Act of 2018 to make all federal buildings in D.C., including the White House, source their energy from 100% renewable sources by 2030. This policy comes amidst President Trump’s efforts to revive the coal industry and roll back the Environmental Protection Agency’s regulations on greenhouse gas emissions. If we look at countries in the EU, many have already turned away from coal because green energy creates more jobs. Ireland became the first country to divest from fossil fuels. Germany’s electricity production from renewables has topped production from coal at 40% last year. Meanwhile, the Trump administration has pushed back.
“We, both as a nation and global community, don’t have the luxury of waiting that long,” said Nathan Auyeung ’19.
The United States’ stubborn reliance on incompetent sources of energy shows that our country is unprepared to combat the turning tides of the new clean energy era. Coal lobbying should have been eliminated a long time ago. Recent reports indicate the urgency of the issue, including one mandated by the U.S. Congress itself. The International Panel on Climate Change’s (IPCC) October 2018 report, for instance, warned us about reaching irreversible climate change if we reached 1.5 degrees Celsius warming, which is predicted to be around year 2030. The U.S. Congress published a report in November 2018 detailing long-term economic drawbacks of climate change in the U.S.

Nathan Auyeung ’19 said, “We, both as a nation and global community, don’t have the luxury of waiting that long.” We cannot wait for our president to stir the change our world needs.

For Marc Karell ’73, a Bronx Science alumni and environmental engineer who owns his own environmental consulting service company, it is only a matter of time before coal disappears. “Coal will die out as a fuel because it is more expensive,” he explained. “It is no longer very expensive to design, install, and operate a new renewable energy plant. So there is a good chance of making a profit.”

He argues that renewable energy is out there, functions quite well and reliably, and has become competitive in the energy market.

“What we need is political will to remove barriers to allow and encourage developers to build new or replacement power plants using renewables,” he said. “We need to change the culture such that all Americans think of renewable power as forward thinking and important and not ‘weird’ or risky.”

Although the jump to renewables seems like a far reach, alternatives are few. As reported by the IPCC, we are already past the tip of the mountain and heading towards unclear years ahead. As individuals, if possible, we can switch our home energy providers from fossil fuels to sustainable sources of energy like solar and wind. We can keep up with climate news such as the newest breakthroughs with the Ocasio-led Green New Deal. We can raise awareness in our communities, particular the youth, whose futures are the most threatened. More than anything, the U.S., one of the world’s dirtiest polluters, needs to take responsibility and enforce aggressive, non-partisan policies to cut emissions to record lows, if not down to zero or negative. This is the only way we will delay our bleak future, if that is even possible.