“I Eat Nails for Breakfast” 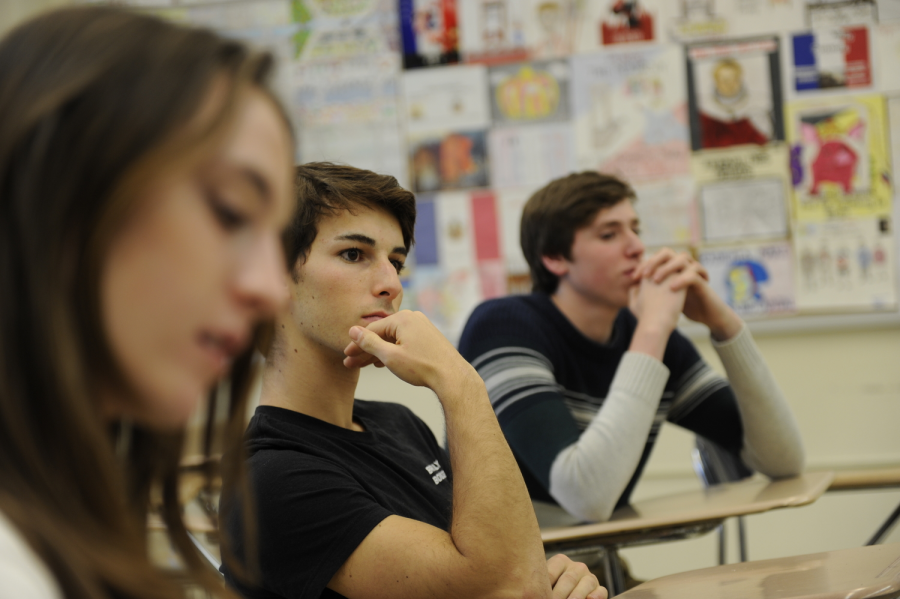 Sophie Zinberg '19, Will Fisher '19, and Pietro Topa '19 listen intently to opinions on Nancy Pelosi as Speaker of the House, which was discussed during a Current Events Forum meeting.

“Tomorrow will be a new day in America,” said Nancy Pelosi, minority speaker of the House of Representatives, after a sweeping victory for Democrats in the 2018 midterms. Democrats won thirty-nine seats previously held by Republicans within the House, marking a return to a balanced government in the most ideologically divisive period of modern political history. However, despite Pelosi’s massive role in this monumental victory, when the debate for Majority leader began, a contingent in opposition to her seat quickly arose.

Her opposition was originally comprised of sixteen Democrats who released a “Message of Change” in which they called for a newer voice to take charge in order to prevent the predominantly cyclical nature of power shifts within Congress. However, this group may not necessarily be representative of change either. Eleven out of the sixteen opposers were veterans of Congress. Furthermore, the vast majority of the outspoken resistance has been comprised of Caucasian men, with only two women taking part, prompting the trending Twitter hashtag: ‘#FiveWhiteGuys.’ In response to this criticism, Representative Seth Moulton contested that this framing was ridiculous and that the so-called “Never Nancy Naysayers” include a broad range of representatives who are unwilling to speak out against Pelosi. This was largely due to the fear that if Pelosi became Majority Leader, she would be unlikely to allow her disputants to rise to significant positions of power.

Will Fisher ’19 argues that this is part of the problem. “I think that Pelosi has contributed to the dysfunction in Congress by concentrating all the power in the top leadership positions and in the steering committee, which determines committee and subcommittee chairs.” Under current caucus rules, committee chairs are never termed out of their positions, putting freshmen representatives at a significant disadvantage. However, Pelosi herself is not solely responsible for this overarching issue in Congress and has spoken out in acknowledgement of this problem.

Additionally, she has personally stated her intent to pursue limitations to chairmanship positions to prevent so called “old Democrats” from holding too much control within the House. “Ideally, new committee chairs would keep new ideas flowing, but someone like Chuck Schumer has institutional knowledge that newer representatives don’t. We don’t want so much change that there isn’t security on a long term basis,” said Ms. Meyer, who teaches A.P. U.S. Government at Bronx Science. However, while new committee chairs may not be a complete panacea for the institutional bias within the party, her willingness to explore various avenues to achieve a better government is indicative of Pelosi’s openness to new ideas.

While she is an old establishment politician, placing new representatives in positions of power is just one way that Pelosi has demonstrated a commitment to the ideals of the modern Democratic party.Even in 1988, in the midst of all the pandemonium surrounding the AIDS epidemic, she sponsored legislation that helped people with AIDS gain access to medical treatment despite immense stigma. Her pro-environmental legislation also dates back decades; for example in 1989, she supported the Global Warming Prevention Act. She has advocated for civil rights issues, such as the Civil Liberties Act of 1987. Pelosi has also never attempted to hide her feminist leanings; in 1994, she advocated for the Violence Against Women Act which was a landmark criminal justice act that established better means of reporting domestic violence and sexual assault.

Furthermore, Pelosi has been proven to be effective when it comes to enacting progressive legislation. “She served as leader of the Democrats under Obama, and under his presidency, many important laws were passed, legislation that impacts us tremendously like the Affordable Care Act. I suspect that she will likewise be successful in the next Congress and help the Democrats to enact policies that reflect the desires of the American people,” said Sebastian Baez ’19.

Despite having similar goals to Democratic socialists, her means of achieving them have been widely criticized. After the Citizens United Supreme Court case, fiscal restrictions on campaign donations became significantly more lax. In order to achieve and maintain a party majority, Pelosi has continuously fundraised for Democratic candidates and has remained willing to work with Super-PAC organizations, causing advocates for a grassroots Democratic party to take umbrage. In particular, both Bernie Sanders and Alexandria Ocasio-Cortez have spoken out against Pelosi’s frequent fund-raising, because they believe it prevents actual Americans from having sway over their political representatives. However, no one can say that she is not effective when it comes to getting the money. Since 2002, Pelosi has been able to fundraise over $728 million for the Democratic party.

Even with her perceived faults, there was not a more qualified candidate who could usurp her. “That’s the problem. There isn’t really a better option— that and the fact that the Democratic party is disjointed in their centralized message and no other viable candidates have emerged who would be a more credible replacement to Nancy Pelosi,” said Ms. Meyer.

Ultimately, Pelosi was re-elected as Speaker of the House. Although the reasons against her speakership have some merit, Pelosi has been a powerful force of change within the House for a decades and has consistently proven to be effective in regards to passing legislation successfully, and thus rightfully deserves her position.
“She served as leader of the Democrats under Obama, and under his presidency, many important laws were passed, legislation that impacts us tremendously like the Affordable Care Act. I suspect that she will likewise be successful in the next Congress and help the Democrats to enact policies that reflect the desires of the American people,” said Sebastian Baez ’19.