Genetic Modification: Is It Worth the Risk? 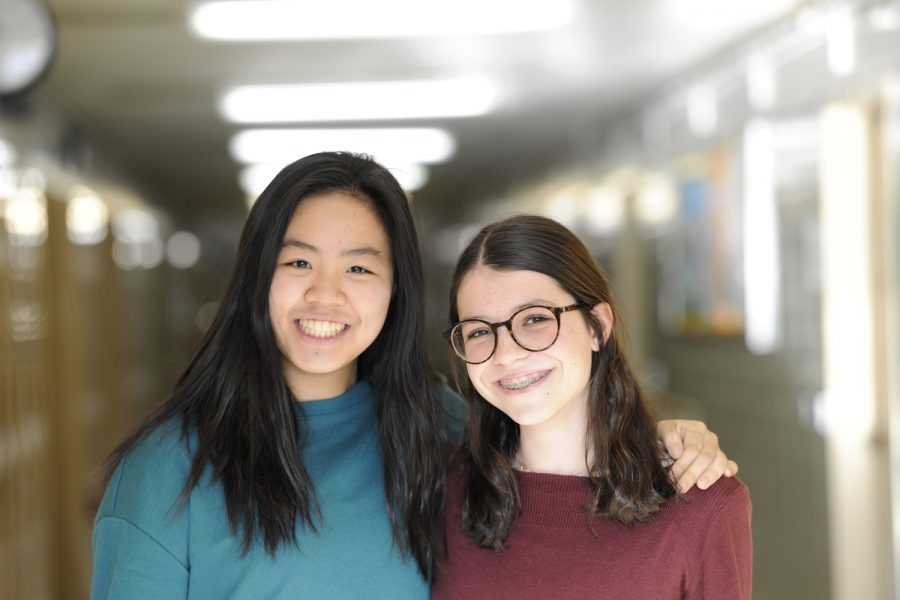 “I don’t think we should totally count [genetic modification] out for the future,” Sarah Lydon ’21 said (right). Emma Nguyen ’21 (left) said, “It does have potential.”

It is important to note that these girls have only been genetically modified to resist contraction of the HIV virus, but some fear future modifications will not stop there. Potentially, even traits hard-coded into our DNA could be up for grabs for the highest bidder. Those who fear “perfect” children as a result of genetic modification have even designated a name for them: “designer babies.”

At a glance, the prospect of designer babies may sound terrifying. But before we dive too deep into where we’re going with reproductive technology, it is important to look at our history.
On July 25th, 1978, the world’s very first “test tube” baby was born. Louise Brown was conceived using in vitro fertilization (IVF), a procedure now considered common. The technique was developed for mothers struggling to have children, and involves fertilizing an egg outside of the body before implanting it into the mother’s uterus. At the time, pushback against in vitro fertilization was very similar to the hazed panic surrounding genetic modification. According to Robin Marantz Henig, a freelance science contributor to ‘The New York Times,’ many “thought of IVF as a perilous insult to nature. The British magazine ‘Nova’ ran a cover story in the spring of 1972 suggesting that test tube babies were ‘the biggest threat since the atom bomb’ and demanding that the public rein in the unpredictable scientists.”

Reading this, I was shocked by the insinuations that any child born through in vitro fertilization was considered a “threat.” My older sister was born using IVF, and without my mother’s successful pregnancy with her, I would have likely never been born.

Other controversial technologies surrounding pregnancy exist, too. For one, preimplantation genetic diagnosis (PGS) involves screening eggs fertilized through IVF before their implantation into the mother’s body. If the zygote, or fertilized egg, displays signs of genetic diseases such as sickle cell anemia, cystic fibrosis, or other genetic disadvantages, it may be abandoned by the parents in place of the next. Even gender is detected through PGS, and parents desiring a boy or girl are able to choose among the zygotes to be implanted. Dozens of zygotes may be discarded through this process.

It seems to me that PGS allows a similar careful picking and choosing of genetic traits that genetic modification would allow, just with more time, effort, and fertilized eggs required. Incorporating genetic modification as an option could remove harmful genetic diseases present in a zygote, and the number of abandoned “trial-runs” could be significantly reduced.
Yes, genetic modification sounds scary. But I believe we need to give it a chance. My sister and I owe our lives to IVF, and many parents owe their children’s health to PGS. In the future, Crispr could drastically minimize, even eradicate inheritable diseases in newborns. “I don’t think we should totally count [genetic modification] out for the future,” Sarah Lydon ’21 said. Emma Nguyen ’21 said, “[Crispr] could help with genetic diseases. People with genetic diseases have a lot of trouble and money problems trying to find a cure, and you could solve that with Crispr. It does have potential.”

Carefully crafting the legislation that would allow Crispr to help those who need it most while minimizing the abuse of the technology will, undoubtedly, be difficult. But the effort seems well worth it. A future where civilians are not burdened with genetic diseases seems a brighter one, regardless of any initial controversy. But even still, is finding the fine line to draw when legalizing this technology possible?