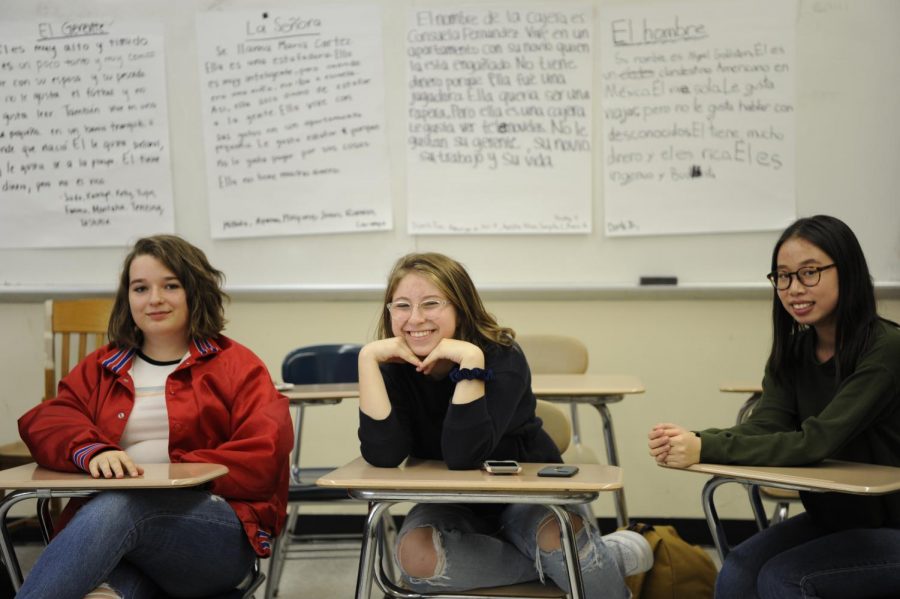 Emilia Lord ’20, Stephanie Gallent ’20, and Mica Nimkarn ’20 participate in a discussion in the Gay-Straight Alliance club.

On November 24, 2018, author Masin Elijè took to Twitter to express his outrage against his alleged ex-boyfriend, NBA star Dwight Howard. According to Elijè, Howard had cheated on him in a series of “heartless” events, and acted nonchalantly towards Elijè’s suffering. At first glance, Howard seemed to be the only individual at fault, having been said to be disloyal and neglectful towards his partner. However, a larger issue lies underneath these “heartless” acts.

Howard had not released any information about him being homosexual; the information of his sexuality was unknown prior to Elijè’s tweets. As a result, a new debate arose over the morality of Elijè’s outing Howard, although Elijè argued he was wronged as well. Coming out has always been a large topic of discussion, with many individuals being concerned about possible rejection or ostracization, while few others find the event trite.

It is known that the Bronx Science community is very open and welcoming to those of different sexualities and gender identities. The Gay-Straight Alliance Club was created to spread more awareness and provide support for people within the LGBTQ+ community, and is one of the most promoted clubs within school. Members of the club are very vocal about their support for those coming out to do so when they are most comfortable, and their stances on the Dwight Howard controversy reflect exactly that.

“I don’t think it’s his business to have outed Howard,” GSA member Leann Goldberg ’20 said. “I don’t think it’s ever anyone’s right to out someone else, especially when homophobia still exists and can sometimes be really dangerous for the person outed.”

“Howard’s career is set in an environment where hyper-masculinity is not only expected but enforced,” said Talukder, “and with this comes the prevalent harmful homophobia within the community, so it’s completely understandable that Howard wouldn’t feel comfortable outing himself.” Elijè’s hasty exposure of Howard’s sexuality was immoral, as he took Howard’s privacy and identity into his own hands.

The Howard-Elijè controversy is a debate worth learning from. People should be informed about how the LGBTQ+ community functions and appropriate ways to support friends and family who are in the spectrum. In regards to coming out, it is important to give people space and time to reflect on their readiness. “I would encourage someone to try finding and reaching out to people who they know for certain would be understanding and supportive,” Goldberg said, “but otherwise it is their choice to decide whether or not they feel comfortable coming out.”

While there are rough times for this community, the Human Rights Campaign states that 77%, over three-quarters of LGBT youth, say that they believe things will get better for them. Through learning, respecting, and occasionally encouraging others to surpass societal limitations, everyone can help make that hope a reality.