The Sunrise Might Be Pretty, But That Doesn’t Mean Teenagers Should Be Seeing It 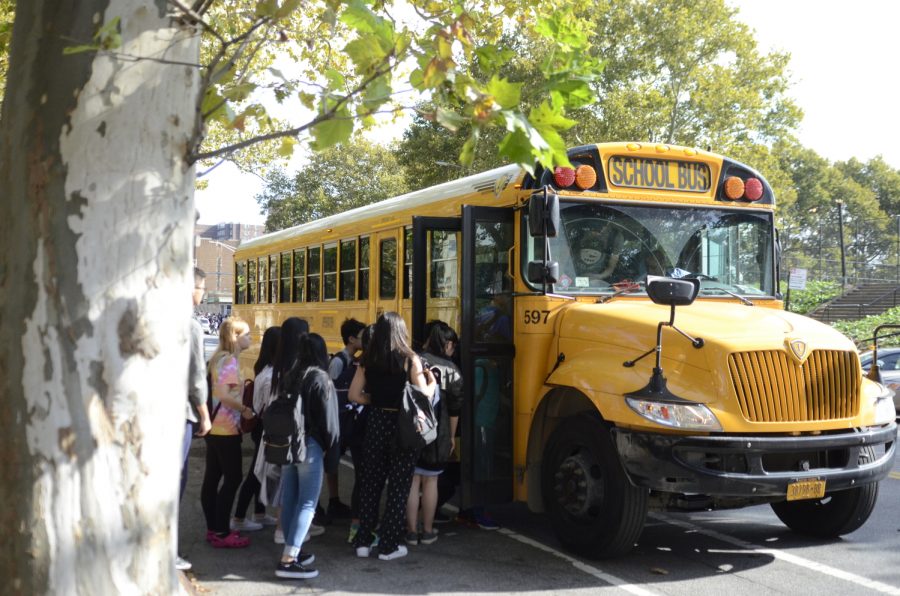 Students board a Vallo bus, a main mode of transportation to and from Bronx Science. Many students take Vallo because without it, their commutes would cut further into their already sleepless schedules.

“Oh my gosh, you live in Staten Island? What time do you wake up?!” go the usual inquisitions, accompanied by wide eyes and gaping mouths.

“Too early,” is often my reply.

As someone who lives in Staten Island and commutes to the Bronx every day on public transportation, I am far too familiar with the struggles of waking up at the crack of dawn. Along with a  large contingent of students at Bronx Science, I find myself waking up before the birds start to sing.

This early start, coupled with late bedtimes due to large amounts of schoolwork and after-school responsibilities, results in chronic sleep deprivation for teenagers who need about eight hours of sleep per night in order to function optimally. For Bronx Science students, getting an adequate amount of sleep is often simply impossible with the robust combination of hours-long commutes, multiple extracurriculars, and hours of homework.

One student, Gidget Rosen ’20, shared her experiences in this regard.“Personally, living around forty-five minutes from school and being part of a variety of extracurriculars, I rarely get home before 7 p.m. If I want to shower, eat dinner, spend even just fifteen minutes talking to my parents, and get to bed by 10:30 p.m. to get eight hours of sleep, that leaves me about two hours to do homework and study, which is unreasonable,” Rosen said.

This insufficient amount of sleep negatively impacts the prefrontal cortex of the brain which controls much of our cognitive behavior and decision-making, meaning that students have a harder time paying attention, concentrating, and processing information.

Survey evidence shows that over a quarter of high schoolers report falling asleep in class at least once a week. This trend negatively impacts students’ grades and test scores, as they fail to stay awake in class often enough to learn. In a study published by the ‘American Economic Journal,’ scientists found that when a student was randomly assigned to a first period course starting prior to 8 a.m., they performed significantly worse in all their courses taken on that day compared to students who were not assigned to a first period course.

Teenagers’ circadian rhythms—our bodies’ biological clocks that regulate our sleep cycle—are different from those of adults. The adolescent body does not begin producing melatonin, the hormone that regulates sleep and alertness, until around 11 p.m. and continues in peak production until about 7 a.m., then stops at about 8 a.m. In contrast, adult melatonin levels peak at 4 a.m. Therefore, waking up a teenager at 7 a.m. is equivalent to waking up an adult at 4 a.m. These shifts in the sleep-wake cycle at puberty mean that most adolescents get their best sleep between 11 p.m. and 8 a.m., reinforcing the idea that schools should start later to allow students to sleep until 8 a.m. Starting at 8:30 a.m. will align school schedules to the biological sleep rhythms of adolescents, whose sleep-wake cycles begin to shift up to two hours later at the start of puberty.
“As someone who had first period free during my freshman and sophomore years and lost that in junior year, having that extra hour or so of sleep makes a big difference; I feel more awake because the sun outside, as opposed to pitch black darkness, complements the extra hour of sleep.”
California recently took a step towards making teenagers’ lives easier in the morning. A new bill that would delay the start of middle and high schools until at least 8:30 a.m. is pending approval from Governor Jerry Brown after passing through the State Assembly. Schools would have until 2021 to make the shift if the governor signs the bill, which could have massive implications for thousands of teenagers’ health and academic success.

If this Californian bill passes, it could be a catalyst for other states—and it should be, considering the positive effect later start times could have on teenagers.

Edison Situ ’19 expressed the impact of a later start to school, stating, “As someone who had first period free during my freshman and sophomore years and lost that in junior year, having that extra hour or so of sleep makes a big difference; I feel more awake because the sun outside, as opposed to pitch black darkness, complements the extra hour of sleep.”

If administrators want students to succeed as much as we are told that we should, then perhaps the solution is not more homework or programs that provide us with an overload of experiences. Instead, it is changing policy to provide us with more of what we need most, sleep.