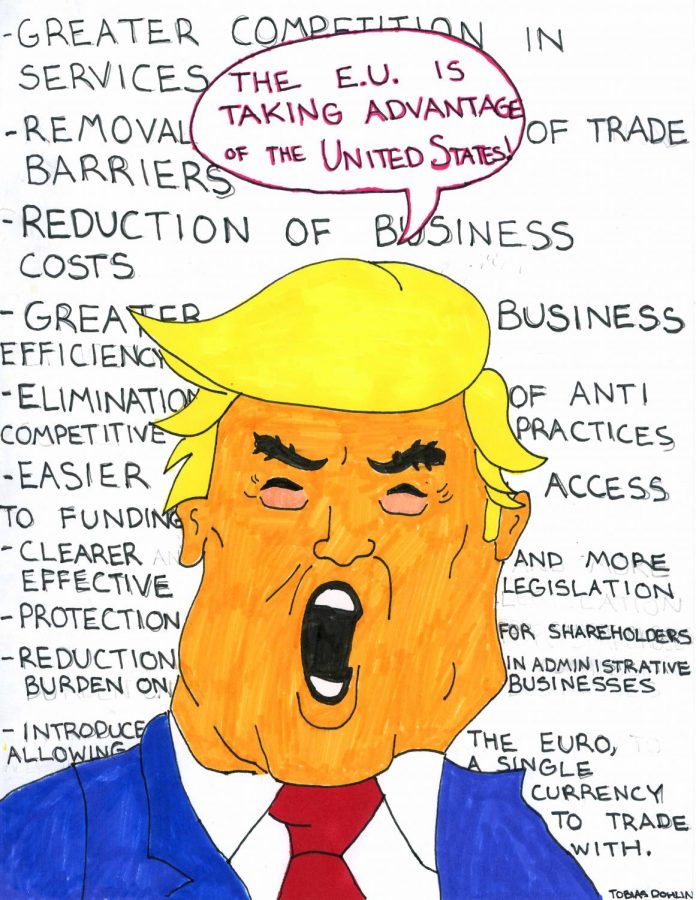 On Monday, September 24, Donald J. Trump and his administration announced a new batch of tariffs on products imported from China. These tariffs, which are levied on a litany of foreign goods, start out at ten percent but are set to rise as the year comes to a close. It is unclear at this point what economic knowhow Trump is basing these tariffs on. This points to a major give some examples problem in the Trump administration: his lack of reliance on numbers.

Tariffs on foreign products that are imported into the U.S. are a tricky business. It is very hard to assess their net effectiveness in both the short and long term scenarios. While tariffs can be impactful in creating jobs in one specific area of the economy, they may have adverse effects in another. It is important that our leaders take into account the total effects a tariff will have before implementing it. However, Trump is not concerned with looking at the numbers to make his decision. According to numbers published in ‘The Wall Street Journal,’ tariffs on foreign steel will create around 10,000 jobs in the steel industry, they will also raise the price of steel, which will lead to a loss of 80,000 jobs in industries which depend on steel, such as car manufacturing. Furthermore, there are many empirical studies that have shown that tariffs reduce the volume of trade, which makes the economy less efficient. All this begs the question: Why is Trump obsessed with tariffs?
“In History class, we have learned that people used to protest when the government lied to us. But now that it’s a given that the government will lie to us, it’s pretty sad,” said Ethan Paliwoda ’19.
Many critics suggest that Trump is using tariffs as a political tool to win votes, rather than as an economic one. Ken Fisher, an American financial analyst, said in a ‘USA Today’ article that, “He [Trump] uses tariffs like a wild man to force talks and make a very different deal. Then he touts it to his voters.” This could be true given that Trump generally supports free trade (he signed a free trade agreement with Korea on the 24th of September, the same day tariffs on China took effect) and expresses a desire for America to take part in the Trans Pacific Partnership.

However, I do not buy it. I contend that Trump has such a basic understanding of economics that he believes that tariffs on China will hurt them politically while creating jobs back home. Unfortunately, the truth is that China does not care about the tariffs, and is able to easily retaliate with tariffs of their own with their highly centralized state. China likes to put tariffs on products produced in states whose representatives support tariffs. Back in the United States, more and more people who work in manufacturing are finding themselves without a job, further creating a political vacuum for Trump to take advantage of.

It’s crazy to think that it has become too much to expect the President of the United States to base his decisions off of facts rather than his personal feelings. “In History class, we have learned that people used to protest when the government lied to us. But now that it’s a given that the government will lie to us, it’s pretty sad,” said Ethan Paliwoda ’19. It’s true that under Trump the economy has been improving, but I think it’s more likely that it is growing in spite of Trump rather than because of him. The majority of economists are opposed to tariffs, and there is empirical and historical evidence against them. Like many things that have happened under Trump, this decision makes no sense. As a nation, we have to start caring about when the government blatantly lies to us. Do not let Trump normalize misinformation.