We Stress College Prestige, But Is It Really Worth It? 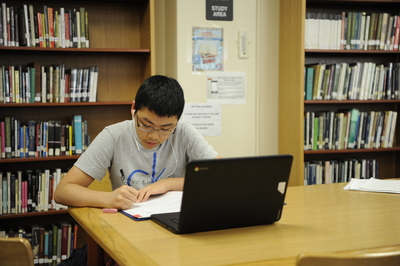 A student spends his free period studying diligently in the library, with the end goal of college acceptance.

Pressure to study diligently and get into a top-tier institution is at its peak; the worry becomes amplified with every question in a prep book. Students spend hours hovering over tiresome math problems and seemingly endless passages, all with the intention of raising their SAT or ACT scores. After all, the higher the score, the more academic doors there are that open.

There is a consensus among students that better test scores lead to better schools. However, colleges of lower rank are often overlooked, even if they offer many of the same opportunities. Most students pursue entrance into widely acclaimed colleges, ones with their names recognized by thousands of students across the country. These students live and breathe with their prep books, not realizing that their ideal institute might be just around the corner.
“Few high school seniors really know what they want to do, and, by extension, what they will earn,” said Sarah Turner, a professor at the University of Virginia.
When conversations revolving around colleges arise, the term ‘Ivy League’ is bound to roll off of one’s tongue. As high caliber institutions, their names alone emanate the recognition many students crave, making the prospect of receiving an education at such schools more desirable.

In the words of a Bronx Science student who wishes to remain anonymous, “[students] are not aware of other colleges because they stick to social norms.” These social norms—the prospect of needing to attend a renowned college—encourage remaining focused solely on ‘mainstream’ schools, preventing students from acknowledging smaller institutes as the fair academic candidates that they are. It has become clear that college prestige is relevant in social circumstances.

Students often comment on the perceived advantage such renowned institutions offer for obtaining job positions and promotions, again supporting the notion of needing to get into a renowned college. “Obviously,” Sumika Iijima ’20 said, “if people see Cornell, they’ll like it.” Many other Bronx Science students share this same attitude, expressing how academic prestige is significant in many crucial situations.

This recognition, although desirable, is not what should define one’s future. Students constantly convey their uneasiness about their future, especially when it comes to income. This common, but not always accurate, notion that less prestigious schools result in lower overall incomes stems from how difficult it is to impress employers with a less well-known college on a résumé. The New York Times published an article where Alan B. Krueger from Princeton University and Stacy Berg Dale from Mathematica Policy Research shared their research on the relationship between income and college tiers. They discovered that, “equally smart students had about the same earnings whether or not they went to top-tier colleges,” which refutes the fears of many individuals. They elaborate on how hard work plays a large factor in success, stating that those who diligently study did better later on in their lives. Abiding this logic, as long as the work is put in, colleges of lower prestige allow students to make a stable and favorable income that could rival those from renowned institutions.

Sarah Turner, a professor at the University of Virginia, called picking colleges “a choice under uncertainty,” where she mentions how students tend to think too far into the future, delving into matters such as income. “Few high school seniors really know what they want to do,” Turner said, “and, by extension, what they will earn.” Turner raised a meaningful point in her statement: most students do not know what they want to pursue in the future, which career path suits them the most, or even which field piques their interest the most. According to research done by Virginia N. Gordon, an estimated twenty to fifty percent of college students are unsure of their major, while an approximated seventy-five percent of students switch at least once before graduation. This all connects back to finances; high tier colleges costs more than lower tier colleges do, so experimenting and switching majors in smaller esteemed schools would be more beneficial both career-wise and finance-wise. Not only would one grasp a better understanding of their future career plan, they would also be saving a significant sum of money compared to a prestigious college.

From a broad perspective, lower esteemed colleges give a fair compromise. While they may not be recognized as widely, they leave students with less loans and roughly the same incomes as more distinguished institutions. Looking at the outcomes, it’s a deal worth looking into. As the hidden gems of colleges, lower prestige institutes deserve more attention than they receive.