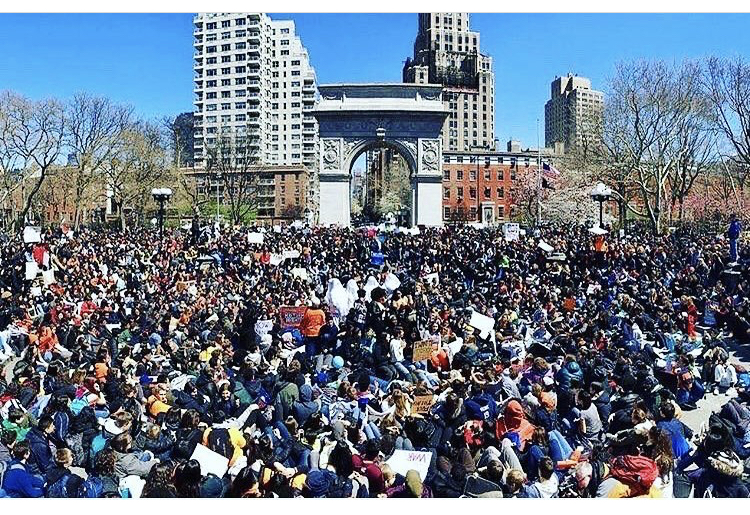 Protesters gather in Washington Square Park for a rally advocating for gun control.

It’s been 7,161 days days since the school shooting that began the cycle of gun violence in American schools. Since the beautiful April morning when two teenagers opened fire on Columbine high school in Littleton, Colorado, leaving thirteen dead and a nation shaken. It’s been 219 days since another teenager murdered seventeen of his former peers in Parkland, Florida, 2000 miles and nearly two decades apart.

No matter how far apart each shooting is, violence always continues. These events are not isolated occurrences. Thoughts and prayers are continually offered, yet the laws don’t change and people grow more and more apathetic.

Across the country, Americans are being senselessly murdered. They are massacred in movie theaters, in concerts, in nightclubs, at police stops, even in their own homes. But as more and more people are killed, fewer and fewer people seem to care. “Sure it’s sad” one Bronx Science student who asked to remain anonymous said, “but it’s not as devastating as when we first started paying attention to these types of shootings. It’s sad, but there are so many other things that are sad too, so it’s hard to stay sad.”

In the days and months following the February 14th, 2018, students began to rally. They attended marches, rallies and walkouts; momentum for the gun control movement began to grow.

On April 20th, 2018, many Bronx Science students participated in a nationwide student walkout. Some of these students made their way to a massive rally in Washington Square Park. As speaker after speaker took to the stage, students and adults alike met them with raucous cheers. Some laughed, some cried; all were caught up in the swell of the moment.

It is with them in mind that activists around the country urge their fellow Americans to stand up and speak out once more against the senseless violence that plagues our country.

Real, lasting change cannot happen if people don’t work at it every day. A march likely won’t change anything; what matters is continuing to work for something afterwards. So let’s get to work.