Why it is Important To Be Sincerely Silent on April 27th, 2018 for 'The Day of Silence' 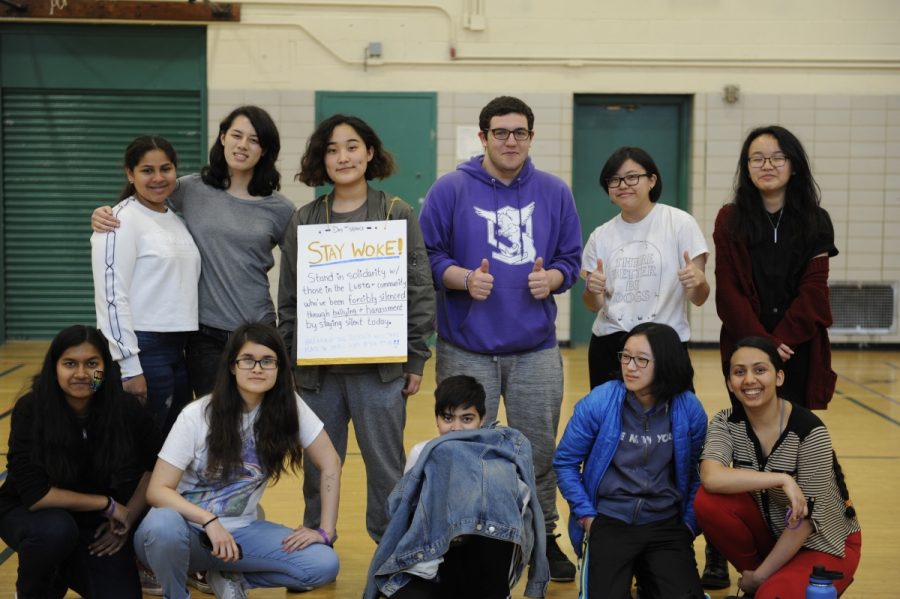 Members of the GSA and its supporters attended the 'Break the Silence' event in order to find a supportive community and dedicated participants in the Day of Silence.

Sometimes staying silent can be a good thing. The Day of Silence is an annual protest day organized by the Gay, Lesbian, and Straight Education Network (GLSEN) to bring awareness to the way people in the LGBT+ community have been silenced by being attacked, bullied, or skipped over in literature and education. On April 27th, 2018, Bronx Science participated in this national day of awareness. Volunteers from the Gender Sexuality Alliance (GSA) handed out purple wristbands with the words ‘Bronx Science Day of Silence’ on them; wearing one of these wristbands signaled a student’s participation in the ‘Day of Silence.’

For students such as Jaesup Sim ’19, who are always actively participating in class, staying silent for the entire day was an arduous task. “Since I love to share an opinion or have a conversation with others, it was especially difficult for me. Your expression is limited, and therefore your action is also restricted,” Sim said.  For these students, the ‘Day of Silence’ is the most successful, since it is able to simulate the feeling of being completely silenced.

This year Julia Gonzalez ’19, the president of the GSA, and Sowad Karim ’19, the president of TedEd Club, went the extra mile in order to spread the news about the ‘Day of Silence.’ “This year, we tried to start planning a few months in advance because setting up the event with the administration and advertising it always takes some time. In the past, we delayed letting people know what was happening, so this year we figured that starting early is crucial,” Gonzalez said. They hoped to efficiently spread the word so that students would understand the importance of the event before it took place.

Still, some students saw the wristbands and the event as an opportunity to just opt out of participating in class. Despite the flyers and videos, there were students who abused the trust that comes along with agreeing to participate in the Day of Silence. Their true purpose was to be a way for students to signify that they were staying silent in solidarity with the LGBT+ community and out of respect for those who were forcibly silenced, sometimes forever. Instead, some students “took it off when they were with friends and put it back on when they went into a class they did not want to participate in,” Sim said.

In truth, any attempt to reduce the number of students who abuse the Day of Silence wristbands is a step towards making the event more successful. Sometimes just letting your classmates know that it is unacceptable to use the Day of Silence as a means of getting out of classroom participation is enough to make a difference.